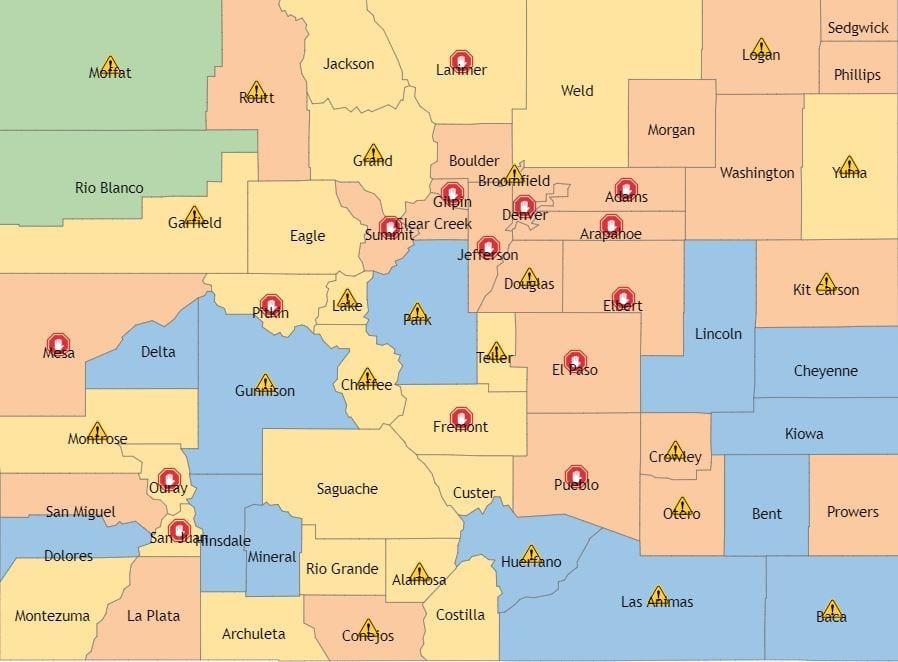 Colorado is moving 12 more counties to the state’s second-highest level of COVID-19 restrictions in the coming days, meaning at least 27 counties will be a step away from lockdown if they don’t slow the surging transmission of the novel coronavirus.

The pandemic continues to worsen in Colorado, with the state again reporting record numbers of new coronavirus cases and hospitalizations Thursday.

State public health officials — reluctant to issue another statewide stay-at-home order — continued to urge Coloradans to only interact with people in their households, wear masks and stay six feet from others when out in the community.

“Our hope with all of this, these are the kinds of local interventions that will help control the spread of this pandemic in these local communities,” said Dr. Eric France, chief medical officer at the state Department of Public Health and Environment, about moving more counties to Level Orange on the state’s color-coded dial system. That level reduces most business capacity to 25%.

“While we can impact the pandemic through these local interventions, and potentially state interventions, we have to remember that it all begins at home,” he said during a news briefing. “It begins with us as individuals.”

The 10 counties will move to Level Orange on Friday are: Douglas, El Paso, La Plata, Phillips, Prowers, Sedgwick, Otero, Crowley, Gilpin and Clear Creek. Two more counties — Pueblo and Conejos — will move to that level on Saturday, according to the state health department.

Boulder County, already at Level Orange, took additional local action Thursday, announcing it is limiting capacity at indoor events to 25% and no more than 25 people. The county previously allowed indoor events to have multiple rooms with each at the 25% limit, health department spokeswoman Chana Goussetis said in an email.

Pueblo on Thursday also extended the city’s 10 p.m. curfew until Nov. 27. The county has issued 11 citations for people not abiding by the curfew, according to a news release.

“Most of our businesses, communities and schools are doing exactly what we need to do to reduce the spread of this disease,” said Jeff Zayach, director of Boulder County Public Health, in a statement. “But when we don’t all take this seriously it impacts everyone — from those who have lost loved ones, to the ability to keep kids in school, to our businesses being able to continue to operate, and certainly our emotional, physical and mental health.”

The state health department reported 4,591 new cases of COVID-19, the disease caused by the novel coronavirus, on Wednesday. That’s the highest daily number of cases reported since the pandemic began, though there was insufficient testing in early months.

Colorado’s percentage of tests coming back positive over the past seven days is 11.68% — well above the recommended 5% goal. The high positivity, along with hospitalizations, means transmission of the disease is increasing and that the rise in new cases is not simply due to more testing.

“That means there are people out there who are not being identified through testing and therefore could be out and about and not either isolated or quarantined as we’d like,” France said.

Symptoms of COVID-19 — including fever, cough, shortness of breath, sore throat, loss of taste and smell, and nausea — can appear between two and 14 days after exposure, the CDC says.

— Wear masks that cover your mouth and nose

— Stay at least 6 feet from others

— Wash hands with soap and water for at least 20 seconds

On Thursday, 1,183 people were hospitalized with confirmed cases of the virus, the day after the number of total COVID-19 hospitalizations — now 1,322 confirmed and suspected — surpassed the April peak for the first time. So far, 85% of the state’s intensive-care unit beds are being used, according to state Department of Public Health and Environment.

Local public health officials have asked state leaders to implement tougher interventions to curb the rise of COVID-19. They said the surge in new infections is surpassing their ability to conduct contact tracing and for the state’s dial system to work in the way it was built.

The dial system assigns counties a level based on new cases, the percentage of tests that are positive and how hospitalizations are trending over a two-week period. The highest stage is Level Red, and a county that reaches that would be placed under a stay-at-home order.

Of the counties at Level Orange, at least 25, including most of the Denver metro area, have case incidences that are high enough to quality for Level Red. Four counties — Adams, Morgan, Prowers and Summit — also have test positivity rates the in the red. Pueblo has hospitalization numbers that also qualify for Level Red, according to the state health department.

The state Department of Public Health and Environment gives counties time to work on a plan to bring their case, test positivity and hospitalization numbers back down before moving them to a higher level. It takes about two weeks for data to show whether there have been any changes in disease transmission because of additional restrictions put in place when counties move from a lower level to a higher one.

The Colorado health department hopes to start seeing the effects of the state order limiting gatherings to no more than 10 people from two households in counties in the Safer-at-Home phase — Levels Blue, Yellow and Orange — in the next week, France said.

Still, France said he wasn’t sure that Colorado would see a decline in COVID-19 cases because of the current interventions in place.

“If cases continue to go up over these two weeks, it’s clear counties will need to do more to slow things down,” he said.

Local public health officials have said that the state needs to take action sooner because of just how quickly cases and hospitalizations are increasing in Colorado. They have argued it would be more efficient to have at least a regional response, partly because of the widespread transmission in the state and how mobile people are.

“We’re at a time where we have significantly increasing numbers so we have to take action now,” Zayach said during a Boulder City Council meeting this week.

But state leaders, including Gov. Jared Polis, have said they would prefer local public health officials to take the lead. Even as France said that a regional lockdown is possible, he said such a decision would have to come from regional officials.

“If there are political reasons that it can’t be done and it’s needed, then I am sure they will turn to the state for our help to make that happen,” he said.