Colorado theater in the time of Black Lives Matter: A new reckoning, in five acts 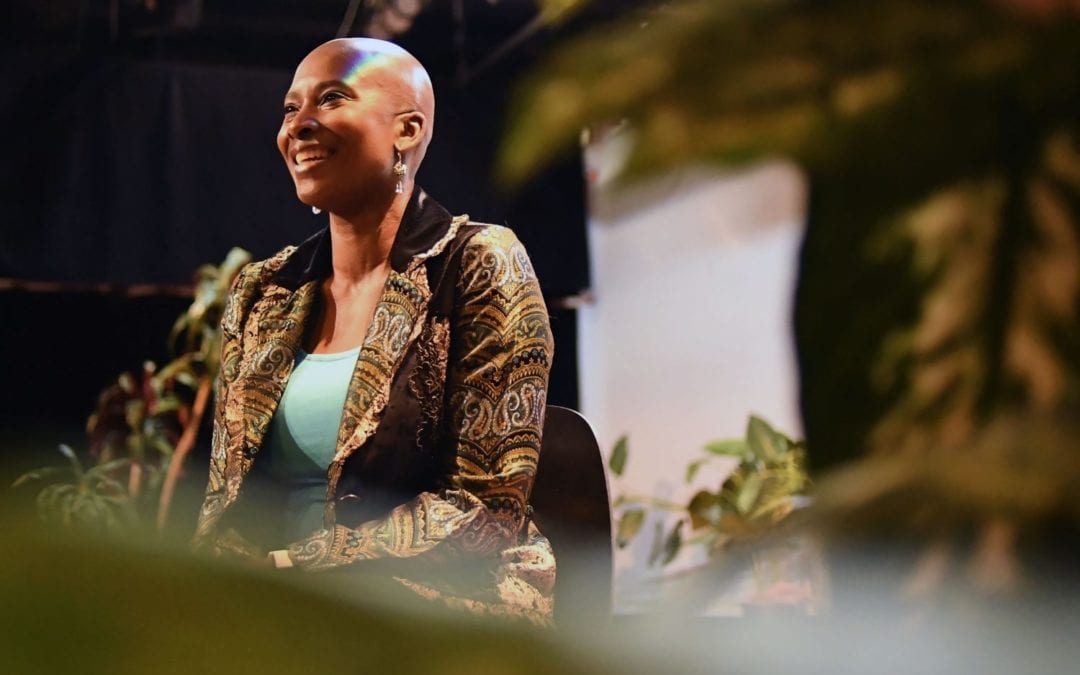 We may have stopped going to theaters, but theater didn’t stop. In the face of COVID-19, shows went on, and did so in unexpected places: on golf courses, in church courtyards, online. They got small, not in themes but in presentation.

But it was summer’s racial injustice and civic responses that insisted on a hard look at the ways systemic racism contorts American theater and thwarts the creativity of theater-makers who are Black, indigenous and other people of color. In the roiling convergence of a pandemic and an endemic crisis in policing, is it a surprise that the art form that puts bodies in a room — that courts intimacy and grandeur — should be forced to wrestle with the ways bodies can be brutalized or ignored … or both?

The good (if rough) news is that like the unprecedented convergence that put the nation on notice, theater’s renewal will be a work of convergences, of collaborations and diligence. So much diligence.

This past weekend, the Breath Project, a theatrical initiative born out of summer’s pain and roiling energy, went online. And the contributions of local theater-makers James Brunt, Ilasiea Gray, Panama Soweto and Sheila Traister will be part of the 24-video inaugural fest. An archive is being built for the initiative co-founded by Gamal Abdel Chasten and Marieke Gaboury that will include even more submissions.

The project’s fiat was clear and more than a little heartbreaking: Each piece should be the work of a creative of color. Each should run 8 minutes and 46 seconds. (That was the length of time former Minneapolis police officer Derek Chauvin had his knee on George Floyd’s neck, the amount of time it took to extinguish his life.)

“It’s a very important, very timely project,” said donnie betts. Curious Theatre Company enlisted the well-regarded theater director and creator of Destination Freedom — an ongoing radio play and podcast — to be one of the curators of the nationwide endeavor. “I’m very excited for the people selected for the festival and then for the archives.” Although the first installment of the Breath Project unfolds online, the possibilities for stage productions becomes promisingly clear as soon as you watch the videos. “The goal is to have some of these performed on stage,” said betts.

The place of Denver artists in the Breath Project is just one example of the work that local theater-makers are taking on. Some of their efforts are audience-facing; some are inward, institutionally-scrutinizing. Almost all of the people who have been pushing for theater to broaden its reach have been doing the work for awhile. But this searing moment to push harder, to build with vigor, hasn’t been lost on any of them.

Lisa Young had lots of time to stew in mid-March and the months that followed. And so the local actor and schoolteacher thought about theater, which had ground to a halt. In May, she called fellow actor Mare Trevathan with an idea for a grassroots initiative. She called it IDEAS: Inclusion, Diversity, Equity, Access Stage.

“I’ve been pretty active — and by active, I mean vocal –  about things that never felt right in theater, being a black, disabled woman artist. I just never felt quite at home,” Young said.

A member of the Phamaly Theater Company, who had her own directorial debut in September with the backyard production of  “Reach,” Young tried to find a niche. She became active in the Colorado Theater Guild but says she “never gained traction.” And then came the killings of Breonna Taylor, Amaud Arbery and George Floyd.

“We have to do something to keep us safe, through theater and the arts,” she recalls feeling. Whatever form the work took, “it should be women-led.”

And so IDEAS is that — and multiracial — with Young, Trevathan and area theater mavens GeeRee Hinshaw, Marisa D. Hebert, Regan Linton, Ilasiea Gray, and Caitlin Lowans sharing the organizational load.

IDEAS has forged a platform with pillars for theaters to build upon; launched a web series, “Outspoken: A Listening Project”; and is in the process of getting theater companies to effect sustainable changes in the way they go about the business and art of theater. Among those leaning in: Boulder’s Local Theater Company and the Catamounts, The Arvada Center, LatinX Theater Guild and Theatre 29.

When Arvada Center board member Greg Francis watched “Amplify,” the online series co-produced by director Betty Hart and the Arvada Center, he was especially struck by one of the video shorts. In it, actor Cajardo Lindsey sits in the driver’s seat of a parked car. (His choice of location is not without potency, since “driving while black” has proven hazardous.) The video has Lindsey praising the Arvada Center, where he has performed, but also taking the organization to task for not providing more opportunities to more actors and theater workers of color.

If theaters took their cues solely from local demographics, then the Arvada Center could point to its overwhelmingly white main-stage audiences and boast “See? We serve our community.” But current demographics don’t guarantee future returns, and the region’s second-largest theater has grander ambitions than reflecting back its city’s 92 percent white demo.

“It’s critically important that we recognize the privilege and the work that is ahead to make this an organization that is bigger and better than just a city organization,” Francis said. Amplify suggests a new commitment.

The first three Amplify episodes feature 15 male performers. The second batch highlights a just-as-passionate and impressive collection of 15 female artists. (The entire series is available on the Arvada Center website.) The works are varied: There are Lindsey’s and Sheryl McCallum’s poignant and pointed critiques of local theater practices. There are also poems, performances of Shakespeare, personal ruminations and more than a few striking musical numbers, including the one that launched the series back in late June: Kenny Moten singing “Lift Every Voice and Sing.”

“They came up with the title and I came up with the platform,” said Hart, who wrangled the performers. Scarcity is one of the excuses offered by casting agents and theater companies; she intended to dispel it. “Finding folks wasn’t the hard part,” she said. “The hard part was saying ‘no.’ “

One of the last shows on stage before COVID-19 hit was Hart’s deftly directed “Scottsboro Boys” at the Vintage. She’d also been named assistant director for one of most anticipated (then postponed) shows of the upended new season: David Byrne and Mala Gaonka’s “Theater of the Mind.” Late last month, Hart was named board president for the Colorado Theatre Guild.

Arvada Center executive director Philip Sneed feels good about Amplify but admits lasting change will require dogged action. (When Arvada Center announced its 2021 season — designed before the seismic cultural shift — it was rightly criticized for falling short.) “The question is, ‘Where do we go from here?’ At some point, a live component (of Amplify) is inevitable. (But) what I want to say about this work is that we can’t do everything at once. So what can we do in the short term that’s meaningful and not performative? What’s the mid-term strategy and what’s the long-term strategy?”

Remaking theater isn’t solely the purview of the area’s high-profile companies. Tenacious artist-driven organizations have been doing the work. Among them: Aurora’s female-led 5280 Artists Coop, the Black Actors Guild and the Source Theatre Company, housed in Su Teatro. The season’s first in-person play was the Black Actors Guild’s production of “Hype Man” written by Idris Goodwin (now head of the Fine Arts Center in Colorado Springs). Add to those the Emancipation Theatre Company and Armory’s recently staged — and live-streamed — fine and infuriating production “I Am Raverro” (still viewable at thearmorydenver.com).

The title echoes one of the cinema’s most stirring scenes, from “Spartacus,” in which a group of Roman slaves refuses to give up the rebel leader and instead stand one by one, declaring “I am Spartacus.” In this art-activist piece, the man deserving similarly bold allegiance is Raverro Stinnett. On the night of April 20, 2018, the artist was brutally beaten by private security guards contracted by RTD to patrol Union Station.

RELATED: Denver artist Raverro Stinnett’s career was taking off. Then he was beaten by Union Station security.

Fronzo Gilkey II appears late in the work as Stinnett, recounting the ways his love of art-making was deeply damaged and his livelihood wrecked. Before that, writer-director Jeff Campbell does an engaging job of indicting the taxpayer-funded transit authority, the private firm it hired and, yes, those of us not paying heed to what violence happens to our fellow citizens purportedly in the name of protecting us.

No, remaking theater in Colorado isn’t the purview of only the area’s largest companies, though their buy-in is vital.

It has been four months since the blockbuster document “We See You, White American Theater” was released online. The collectively forged work is a call for restructuring by BIPOC theater artists. There are 29 pages of demands, and the statement has garnered support from a who’s-who list of luminaries, among them Pulitzer Prize dramatist Lynn Nottage, actors Viola Davis and Sterling K. Brown, and MacArthur Fellow and oft-produced Curious Theatre playwright Dominique Morisseau.

(For a sense of how local theaters responded initially, read Juliet Wittmann’s piece in Westword.) The implications and the responses to “We See You” continue to reverberate throughout the nation’s theaters, because the work is, as Denver Center for the Performing Arts’ Lydia Garcia said recently, “the work of a lifetime.”

And what of the region’s cultural behemoth? “I can imagine from the outside looking in, the machinery of DCPA looks like it’s gone quiet in this time, when we’re not able to stage productions, when we’re not able to put in the amount of energy we always put into every season,” Garcia said. Instead, she believes “all of a sudden, that energy is absolutely focused inward.”

Garcia arrived in Denver a little over a year ago to take the newly created position of executive director of Equity & Organization Culture. When the “We See You” document went live, Garcia converted its demands into a spreadsheet for the Denver Center executive team; it has 346 individual lines, dozens of different themes within nine principals. Since Garcia’s very position came out of internal calls for a more comprehensive approach to diversity, equity and inclusion, she was not surprised to see some demands already being wrestled with at the Denver Center.

“The best way to signal that we really do stand with the community is we do the work to transform ourselves,” said Garcia. “We do the work from the inside out. So that when we can turn the lights back on our stages, folks can feel we are different in our practice.”