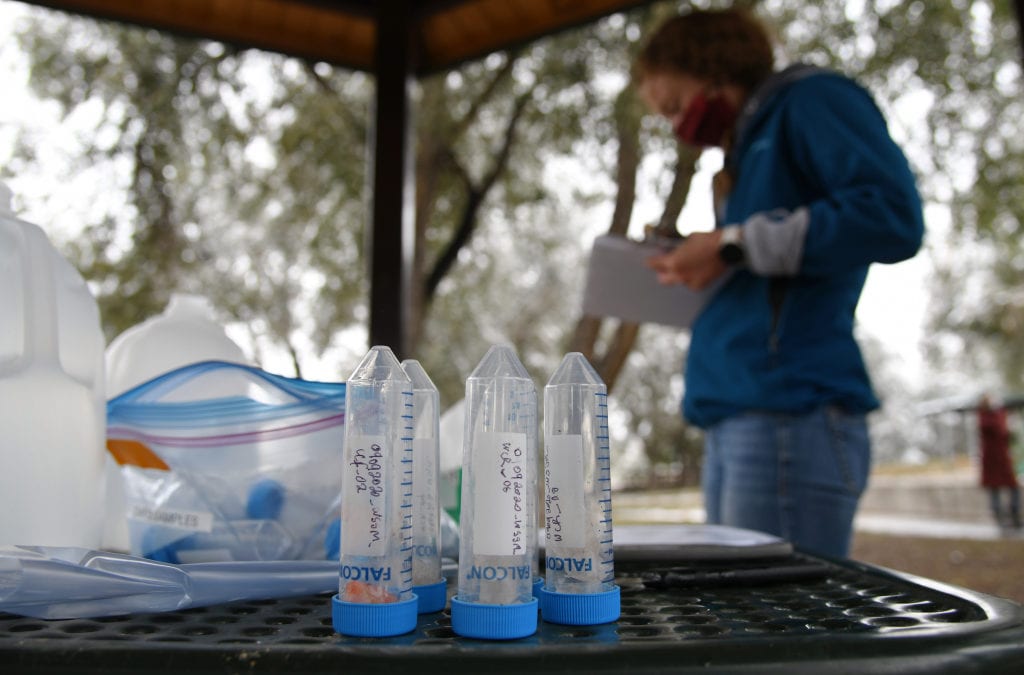 This bass could be a boast-able catch for the residents who flock here to fish. Grills at the ponds invite idyllic picnic feasts.

But Erickson was testing to measure toxic contamination — from PFAS, the per- and polyfluoroalkyl substances called “forever chemicals” — that has spread through the Fountain Creek watershed south of Colorado Springs.

Fish can accumulate PFAS at concentrations up to 10,000 times higher than the already-elevated levels in groundwater connected to the ponds and creek, state officials said, and people eating toxic fish could face health harm ranging from autoimmune ailments to testicular cancer.

She and Kelsey Barton, a colleague at the Colorado Department of Public Health and Environment, had cut flesh from two dozen catfish, white crappie and green sunfish caught in a net state wildlife workers cast the night before. A large northern pike was up next. Families with kids were arriving with fishing poles.

“We want to make sure we have enough information to protect the public,” Erickson said.

The fish testing begun this month reflects an intensified scramble by Colorado public health officials to minimize human health and environmental harm as PFAS chemicals that don’t easily break down spread worldwide, with U.S. airports and military bases, where workers used toxic firefighting foam, standing out among the hot spots.

Colorado officials also are stepping up a campaign to contain these unregulated chemicals, declaring efforts to deal with PFAS a top state priority. The latest investigations found elevated levels of PFAS contaminating water in north metro Denver, including Sand Creek near the Suncor Energy oil refinery, as well as foothills sites west of Boulder, the Air Force Academy in Colorado Springs, and the Buckley and Peterson Air Force bases.

Public water treatment plants in hard-hit areas have been retrofitted with granular carbon filters and other costly systems designed to remove PFAS, a class of about 5,000 widely used chemicals that rank among the most problematic in a growing multitude of unregulated toxic pollutants degrading groundwater, soil and drinking water.

Blood testing by a Colorado School of Public Health team on 213 residents south of Colorado Springs, who for years ingested PFAS in their drinking water, showed absorption of the chemicals at levels up to 15 times higher than the national norm.

That team is helping to conduct a federal investigation involving residents in Colorado and seven other states aims to determine the role of forever chemicals in health problems including kidney, liver and thyroid disease, spiking cholesterol, altered response to vaccines, asthma, decreased fertility, pre-eclampsia and lower birth weights.

But the forever chemicals, developed in the 1950s, now are so widely used — in firefighting foam, fast-food wrappers, nonstick coatings in households, stain-resistant recreational gear, even dental floss — that public health agencies are investigating other potential pathways.

Fish stand out because of their sponge-like absorption and may serve as an indicator species. When tests in Michigan detected heavy contamination, state officials warned residents to limit fish consumption. Colorado officials said they’re prepared to do the same.

“Just as with water, we would have the same concerns for fish if people were being exposed at high levels,” said Kristy Richardson, a toxicologist with the state health department. “We think eating fish is an important part of a balanced diet. But it is important that people understand some chemicals can build up in fish.”

Sarah Erickson, right, a research scientist for the Colorado Department of Public Health and Environment, weighs a large-mouth bass before slicing into it to test tissue for toxic “forever chemicals,” at Fountain Creek Regional Park on Wednesday, Sept. 9, 2020.

Environmental Protection Agency officials for a decade have been mulling whether to set cleanup standards and a national safety limit for PFAS in drinking water. For now, EPA officials point to a health advisory level of 70 parts per trillion for the combined total of just two PFAS chemicals, called PFOS and PFOA.

Colorado officials haven’t set a state-level regulatory limit, as counterparts around the country have done, but use the 70 ppt advisory level in supervising public utilities that provide water to more than 50,000 people south of Colorado Springs. State-backed groundwater testing in the Fountain Creek watershed south of the city measured PFAS at levels ranging from 150 ppt to 1,600 ppt for six different chemicals.

Setting a state limit to aid inspectors trying to control PFAS pollution in water and soil would be costly, officials said. And while Colorado health officials are preparing to do so, the agency also is taking more aggressive action immediately, said John Putnam, environment programs director for the state health department.

“We want to chase this down,” Putnam said. “We don’t have a program set up for creating our own ‘maximum contaminant level’ independent from the EPA and we need to get funding for that. … But we are actually jumping past the setting of standards into how we make sure we know where it is, intercept it, and avoid it being introduced into the environment.”

An emerging state strategy calls for:

State health officials told The Denver Post they’re discouraging use of any PFAS, including newer short-chain varieties, because all are based on a carbon-fluorine bond that doesn’t break down easily even when ingested.

The Federal Aviation Administration has required use of firefighting foam that contains these forever chemicals because they are effective in snuffing fuel fires. But Denver International Airport managers and their counterparts nationwide increasingly have faced environmental concerns, and fire chiefs are hearing from firefighters exposed on calls and in training.

Federal legislation in 2018 directed the FAA to stop requiring use of the foam by October 2021. Colorado lawmakers have prohibited the use of firefighting foam containing forever chemicals at airport hangars starting in 2023.

State health officials negotiating with airports and fire departments have emphasized “working to find alternatives,” Putnam said. “Our focus is going to be on finding fluorine-free foams.”

Firefighters and oil and gas industry crews that rely on foam containing forever chemicals to stop fuel fires “can still do it,” he said. “But we’re going to be much more vigilant than in the past: seeing where it is, catching it and cleaning up quickly.”

Sarah Erickson, a research scientist for the Colorado Department of Public Health and Environment, pulls up a northern pike, one of about two dozen fish caught in a net for tissue-testing to measure absorption of “forever chemicals,” at Fountain Creek Regional Park on Wednesday, Sept. 9, 2020.

Lawmakers have ordered more groundwater tests after a lag blamed on insufficient funds. A couple years ago, tests detected forever chemicals at maximum levels nearly 3,000 times higher than the EPA drinking water health advisory level in metro Denver groundwater. Over the past year, testing along Sand Creek found a combined level of PFOA and PFOS at 77 ppt in surface water at the confluence in Commerce City, where the creek flows into the South Platte River.

And investigations into the contamination of South Adams County Water and Sanitation District municipal wells — which were shut down in 2018 — have determined an old Denver firefighter training center may be a source.

State records show that Suncor oil refinery discharges into Sand Creek contained combined levels of PFOA and PFOS as high as 199 ppt in January. State officials said they plan to incorporate limits on forever chemicals into Suncor’s permits next year and require the company to monitor wastewater flows into the creek.

“In the event that firefighting foam containing PFAS chemicals is needed in an actual emergency, Suncor will take all reasonable efforts to keep the material on site through containment or retention to prevent the migration to surface, ground or storm water,” she said.

Blood testing to measure forever chemicals in people south of Colorado Springs in Fountain, Security and Widefield also has been expanded to include 1,000 more adults and 300 children.

“Everyone in the United States has some PFAS exposure,” said John Adgate, project leader for the Colorado School of Public Health. “Minimizing PFAS exposure is prudent advice for everyone.”

Kelsey Barton, a risk assessor at the Colorado Department of Public Health and Environment, lays a fish on a sterile cutting board in a gazebo at Fountain Creek Regional Park while collecting tissue samples Wednesday, Sept. 9, 2020.

For fish, state health researchers are teaming with environmental engineers at the Colorado School of Mines.

They’ve set up a lab for analyzing the tissue samples. On a sterilized cutting table by Willow Ponds, Erickson and Barton placed dorsal fillets from each fish in jars and stored them on ice in coolers. They hauled these to the lab for processing. School of Mines technicians planned to use a mass spectrometer to measure several PFAS chemicals.

Fisherman at the ponds said they’d be interested to know the results.

“I prefer to eat wild and native fish because they taste better. You can tell from the color of the meat,” said Jacob Grover, 33, of Colorado Springs, who was practicing with a new fly rod and didn’t plan to eat what he caught — pointing to a fertilizer plant next to the park as a possible source of other toxic pollution.

“I would not want chemicals in my fish at all.”