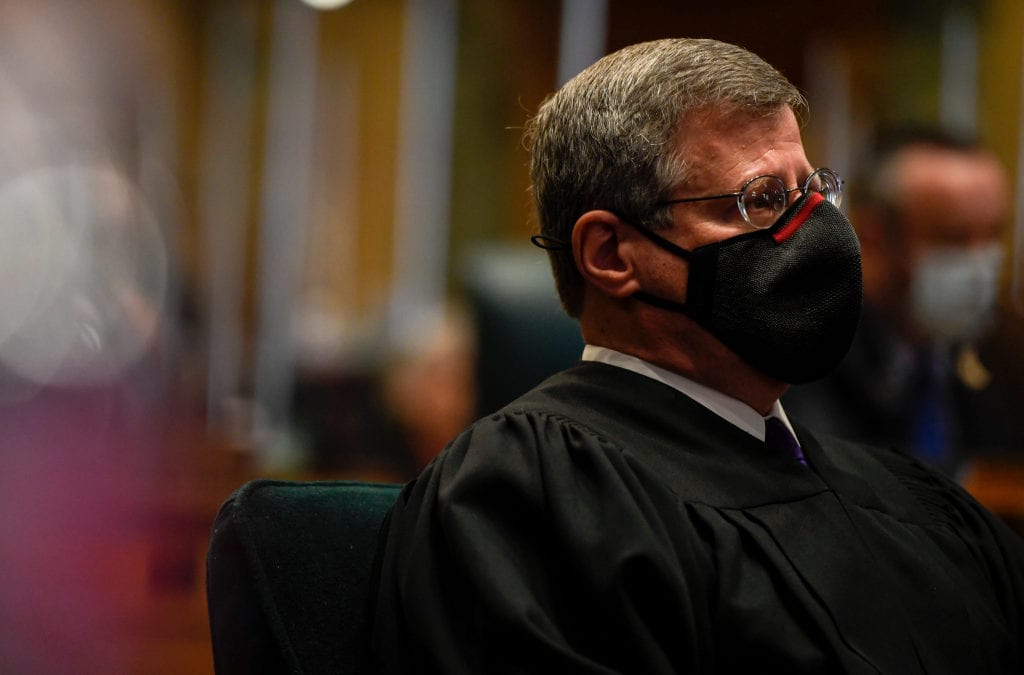 A harassment accusation made nearly eight years ago against Colorado Supreme Court Justice Richard Gabriel, then a judge on the state Court of Appeals, by a newly hired law clerk was settled quickly and quietly, according to two people with knowledge of the agreement, essentially ensuring it would not sully his shot at the high court.

To safeguard that secrecy, the Colorado Judicial Department had the female appellate law clerk who made the accusation in September 2013 – then a 34-year-old who was a year out of an Ivy League law school – sign a non-disclosure agreement that kept her on the payroll for a year in return for her promise not to sue, the sources confirmed for The Denver Post.

The woman claimed the judge and a male law clerk in the court created an uncomfortable work environment for her shortly after her arrival in August 2013, the sources said.

In an email to The Post, Gabriel said that “any suggestion that I engaged in any form of harassment of anyone at any time is false.”

At the time Gabriel hired the woman to work for him as a judicial clerk, he was an applicant for an opening on the state Supreme Court.

An internal department investigation was inconclusive about the woman’s allegations. The release agreement she signed was allegedly approved by a chief justice and kept from reaching the Supreme Court Nominating Commission.

The allegation that the release agreement was crafted to keep Gabriel “safe” during the Supreme Court nomination process is part of a two-page memo at the center of a scandal over a $2.5 million contract awarded to a former department official. That official, Mindy Masias, was prepared to file a tell-all sex discrimination lawsuit if she was fired over financial irregularities.

Who conducted the investigation into the woman’s complaint is unclear. Masias was the department’s director of human resources at the time.

The woman left the department before her one-year contract was completed but continued to be paid for the full term, according to the sources, who refused to be identified because they could be disciplined for discussing the confidential matter publicly. Another female law clerk replaced the woman on Gabriel’s staff in December 2013, she told The Post in an interview and one of the sources confirmed.

The Judicial Department has refused repeated Denver Post requests for a copy of the agreement under the judiciary’s open records rules, saying internal personnel investigations and sexual harassment complaints and investigations are protected from disclosure.

Steven Zansberg, a 1st Amendment attorney for The Post, argued that settlement agreements between former public employees, in all branches of government, and their former government employers are routinely declared to be public records — even in cases where sexual harassment allegations are at issue.

The former clerk was paid about $50,400 in all, payroll records confirm, the standard annual salary for an appellate law clerk at the state’s Court of Appeals.

Details of the conduct that led the woman to complain are unclear, but one of the sources described the alleged harassment as “a 2 on a scale of 1 to 10,” and, at its heart, a misunderstanding over what was said.

The agreement was intended to “not ruin her career, to put this behind her and (allow her) to move on,” the person said, refusing to offer specifics. “Basically it wasn’t what she had signed up for. It wasn’t a good fit. It was a very uncomfortable situation for her.”

The former law clerk, now an attorney specializing in employment law outside of Colorado, did not respond to repeated telephone and email messages from The Post. The newspaper does not name the alleged victims of harassment without their permission, but sources confirmed her identity and judicial department records confirm her employment.

“I was interviewed as part of an internal investigation and during that process I was specifically told by the investigator that no allegations of inappropriate conduct had been made against me,” he told The Post in an email. “I have never been made aware of any allegations of misconduct against me by (the woman) or anyone else during my time at the Judicial Department. I never engaged in any misconduct.”

The memo, authored by then-Human Resources Director Eric Brown, highlighted a number of situations in the department in which alleged gender discrimination and sexually explicit misdeeds by male judges and other high-ranking officials dating back nearly a decade were ignored or covered up to protect them.

Brown was Masias’ deputy when the law clerk’s allegations were investigated.

The decision to negotiate the settlement with the law clerk was “per the chief justice,” the memo said, though it did not name the judge. Chief Justice Michael Bender was retiring at the time and Chief Justice Nancy Rice was to replace him.

“Negotiated a release agreement with a law clerk who accused her COA (Court of Appeals) judge of harassment in order to keep the COA judge ‘safe’ during the … Supreme Court Justice selection process per the chief justice,” the memo says.

At the request of the Supreme Court, a panel of eight people was named last week by Gov. Jared Polis, Attorney General Phil Weiser and the Legislature to hire and monitor an independent investigator to look into the memo’s allegations. Simultaneously, Colorado Auditor Dianne Ray’s office is investigating the assertion that the $2.5 million contract was given to Masias, the department’s former chief of staff, to avoid the tell-all lawsuit.

Responding to an email from The Post seeking comment on the circumstances and details of the negotiated settlement with the former clerk, Gabriel said: “Your recitation of the facts of this matter is incorrect,” but he declined to elaborate.

“I will cooperate fully with the forthcoming independent investigation and will be fully vindicated,” he said in the email. “Pending completion of that investigation, I will have no further comment.”

While Gabriel was not among three Supreme Court finalists named in October 2013 to replace the retiring Bender – Justice William Hood eventually received the appointment – the release agreement ensured Gabriel’s hopes for the state’s highest court would not be marred.

Bender told The Denver Post he was not aware of any harassment complaint against any Court of Appeals judge applicant to the Supreme Court at the time. As an ex-officio chairman of the nominating commission, Bender said he would have been duty-bound to report any such incident to them, no matter how slight.

Then-incoming Chief Justice Rice has told The Post she was aware of the harassment complaint as detailed in the memo, but didn’t say when she knew of it. She said she knew a department investigation had ensued and that there was a resolution.

She would not say whether the complaint was founded or not, or what the resolution was.

The Colorado Commission on Judicial Discipline has said none of the incidents listed in the memo was sent to them despite a department directive that requires the referral of all harassment complaints. The commission must disclose any founded complaint to a judicial nominating commission.

Several members of the 15-person Supreme Court nominating commission from that time have told The Post they recall Gabriel was an applicant for Bender’s slot. They said they do not recall learning of any negative issues regarding anyone who applied for the court’s open seat, and that such information would likely have had a material impact on whether an applicant would get nominated to the governor.

The commission fans out to conduct extensive interviews of the applicants, as well as associates and colleagues, then conducts multiple votes before deciding on three names to be forwarded to the governor.

In a recent public hearing in which the Supreme Court heard comments regarding increased transparency in the attorney discipline process, Gabriel said there should be some limitation on what complaints become public.

“I am concerned with this, unlimited, everything is open to the world (approach) because I fear the damage, reputationally, that it could do to very fine lawyers who did nothing wrong, and clients using it as a weapon against a lawyer,” Gabriel said.

He has also emailed others to say initial Denver Post stories that revealed the existence of the memo, the judicial department’s refusal to release it, and former State Court Administrator Christopher Ryan’s assertions of a quid-pro-quo contract were “simply not true.”

“As in (The Post’s) past articles on the branch, which are uniformly negative, in this one, (The Post) found an unhappy ex-employee and (The Post) ran with the one-sided, sensationalist narrative (The Post) was told,” Gabriel emailed his staff on Feb. 3, the morning The Post’s first story appeared, according to a copy obtained by the newspaper via an open records request.

The court released the memo five days later after the justices said they read it for the first time, and Chief Justice Brian Boatright called for an independent investigation into its contents and the auditor’s inquiry into Ryan’s claims.