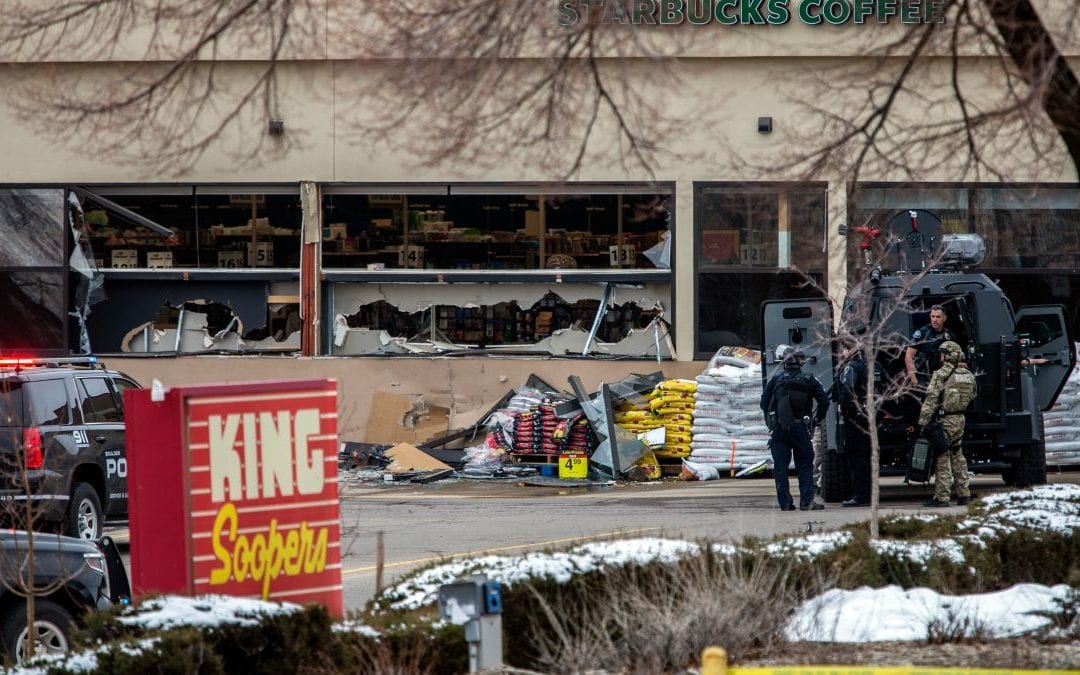 At least six people were killed by a gunman who opened fire at a supermarket in Boulder, Colorado, on Monday afternoon.

According to a local ABC affiliate, the shooting occurred around 2:30 p.m. local time, which is when police arrived at the grocery store, a King Soopers, in response to 911 calls. The suspect then opened fire on authorities, resulting in the death of one Boulder police officer.

The suspect has been taken into custody by police and transported to a local hospital for an injury, authorities say.

Multiple firsthand and eyewitness accounts have begun to piece together how Monday’s events transpired. One young couple who entered the store to buy ingredients for dinner had split up to do the shopping when they heard gunshots and saw customers running through the store.

“It was muffled at first and I thought maybe someone had dropped something, but then it went again, probably about 15 to 20 shots, really fast,” Quinlyn Sloan, 21, told the New York Times. “My husband came up and shoved me out the door, and yelled, ‘Call 911!’ Then he ran back in to make sure a couple of older ladies who were in the aisles got out OK.”

The two managed to sprint across the parking lot and hide behind a building for cover.

The CNN affiliate KCNC spoke to a man whose family was in the supermarket to get vaccinated at the store’s pharmacy when the shooter opened fire.

“I got the call from my daughter and my grandchildren that my son-in-law walked into the pharmacy for him to get a Covid-19 shot and the shooter came in, shot the woman in front of them,” the man told KCNC reporter Conor McCue. “They were texting, hiding in the coat closet. Turned their phone off and were going ‘we’re hiding, we’re okay’ you know, ‘don’t call’ you know the phone would ring and give away their position.”

He said they hid in the coat closet for an hour before being rescued. None of them were harmed.

There may be nothing more American than nearly dying in a mass shooting on the way to getting a vaccine for a deadly virus. Mass shootings reached their lowest point in more than a decade during the pandemic; this developing story is a painful reminder of what it means to “return to normalcy” in the United States.

We will continue to update this story as more information becomes available.