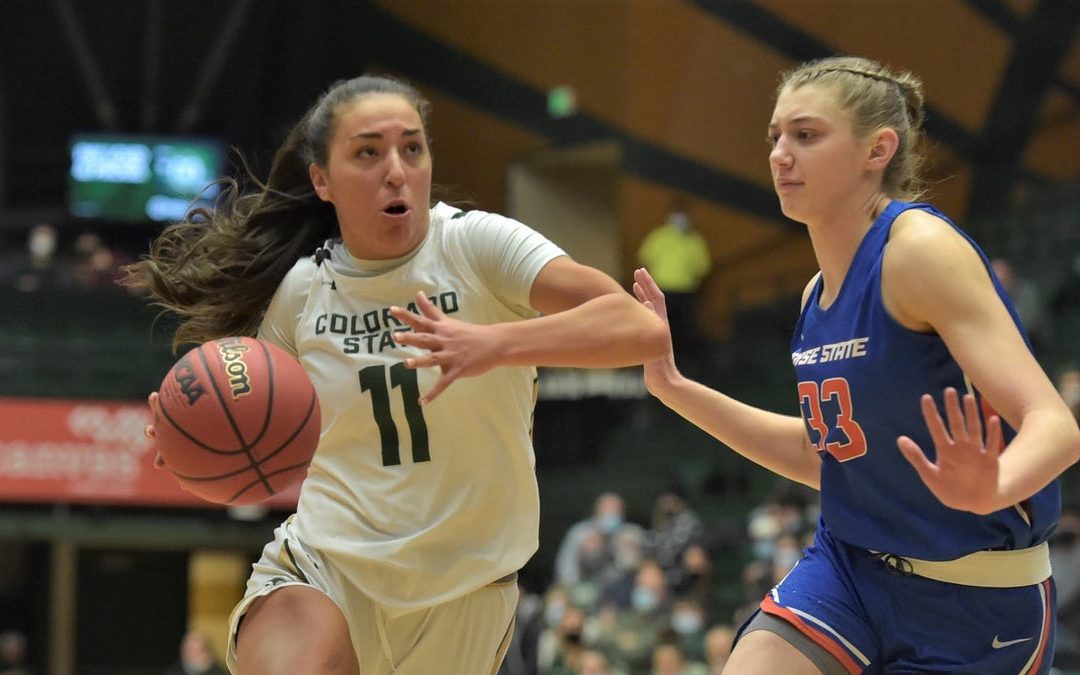 Colorado State’s women’s basketball team came off an extended break Tuesday night and quickly established itself as the team to beat in the Mountain West with an 81-77 win over Boise State in front of 1,209 fans at Moby Arena.

Despite suiting up just eight players and losing one of those to an injury less than five minutes into the game, the Rams (10-1) turned up the heat at both ends of the floor early in the second half to build a 10-point cushion and then held on to win their sixth straight game while playing for the first time in 16 days.

Starting forward Karly Murphy and reserves Anna Prim and Jess Moors were out based on COVID-19 protocols, while Sydney Mech, who blocked eight shots in a single game earlier this season, was in street clothes with a protective boot on her right foot and ankle.

CSU canceled a Dec. 21 game at Northern Illinois because of positive COVID-19 tests in its program and hadn’t played since Dec. 12.

“That’s just a really gutty, tough win by our basketball team,” CSU coach Ryun Williams said. “We’ve had a lot of adversity here the last 15 days, the COVID stuff and not really being able to practice.

“So, to come out and play like we did with just that toughness, I just couldn’t be more proud of our squad.”

The Rams’ already thin roster took another hit when sophomore forward Cali Clark, who took Murphy’s place in the starting lineup, banged her head hard on the floor while fighting for a rebound just 4:14 into the game and did not return.

Still, the Rams found a way to beat a Boise State team that ended their season a year ago with an upset win over No. 3 seed CSU in the quarterfinals of the MW Tournament in Las Vegas.

“We wanted this,” Hofschild said. “We wanted to prove to everyone it doesn’t really matter what our circumstances are, we can win. &mldr; I think every one of us knew there was a little bit more to do tonight, and they did it perfectly, so it was a great game.”

Although it’s just the first of a scheduled 18 games in conference play, it’s a win that the rest of the MW can’t ignore.

CSU was picked to finish fourth in the 11-team conference in a preseason media poll but had the best record in the MW heading into league play and got a nice boost of confidence with the shorthanded win Tuesday.

They played with a lot of energy and emotion and made the plays they needed to make to get the victory, their 10th in 11 games this season. The Rams’ only blemish was a Nov. 28 loss to Louisville, now 10-1 and ranked No. 2 in the Coaches’ poll and No. 2 in the Associated Press Top 25.

“I think we feel really good,” Farkas said. “This just gave us the boost that we actually needed.”

Preseason favorite and defending MW champion Fresno State was just 4-7 in nonconference play, with only one victory over an NCAA Division I opponent. The Bulldogs dropped their conference opener Tuesday night at UNLV, 73-63. It was their seventh loss in the past nine games.

UNLV (9-3) has won six of its past seven games after a shaky start that included losses to Northern Arizona and Texas-Arlington.

Nevada (9-4) has won eight of its past nine games, including its conference opener Tuesday over Air Force, following a 1-3 start to the season.

And New Mexico (9-4), which had its conference opener against San Jose State postponed because of COVID-19 issues with the Spartans, has won five of its past seven, with the lone losses in that stretch coming on a neutral court to Texas Tech and at Arizona.

So, the Rams aren’t the only team in the MW off to a strong start.

But CSU certainly looks like a legitimate contender again to win a conference it dominated while winning four straight regular-season titles from 2013-14 through 2016-17 before sinking to the bottom just two years later while going 2-16 in league play during an 8-22 season.

The Rams were leading the nation in fewest turnovers (10.0 per game) and free-throw shooting (81.9 percent) coming into Tuesday night’s game. They also led the MW and ranked among the top 20 teams in the nation in scoring defense, limiting opponents to an average of 52.2 points a game.

Boise State put up a lot more than that Tuesday against the shorthanded Rams.

But like the depth it hadn’t had to show off before, the defense was there when CSU needed it most.

CSU forced Boise State to commit four turnovers in the final two minutes after the Broncos had closed within six points.

And the Rams hit just enough free throws — 16 of 22 down the stretch — to get the win despite going without a field goal for the final 6 ½ minutes.

Mech could be out for quite some time, Williams said.

But he hopes to have Clark and the three quarantined players back when the Rams travel to California for their next two games — Jan. 3 at San Diego State and Jan. 6 at Fresno State.

“I like where we’re at,” Williams said. “We still have a lot of areas that we have to get better in. But each night poses such a different challenge, and I thought our kids handled tonight’s challenge really well.

One game that showed why the Rams will be a team to be reckoned with this season.