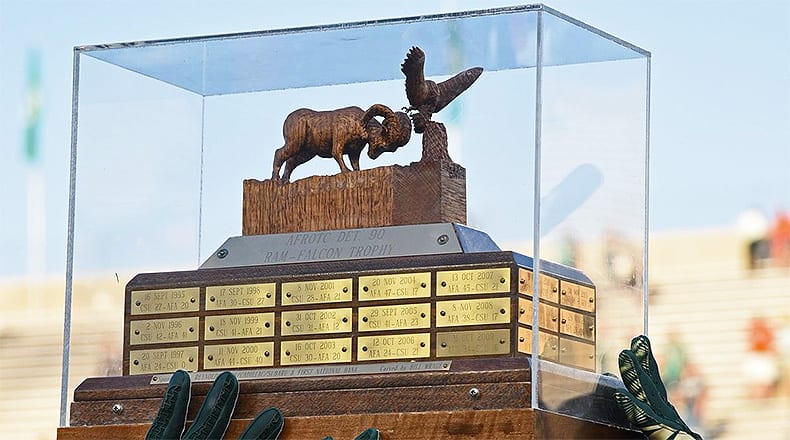 Editor’s note: On Wednesday afternoon, the Mountain West announced that Thursday’s scheduled game between Colorado State and Air Force has been canceled due to COVID-19 issues within the Rams’ program.

Due to an upward trend of COVID-19 cases within the CSU football program, the Rams are unable to play on Nov. 26. The MW is canceling the game and declaring it a no contest. There is no plan to reschedule.

The MW is working with AF on alternative game options for this weekend. pic.twitter.com/Ik9ybnjORV

The and Air Force Falcons are set to renew their in-state rivalry in Colorado Springs on Thanksgiving Day. Colorado State enters with a 1-2 record, highlighted by a 34-24 victory over Wyoming on Nov. 5. Though both on-field losses were big (including a 52-21 loss at Boise State in its last contest), the cancellations of two others — including last week’s date with UNLV — were perhaps more frustrating for first-year head coach Steve Addazio’s squad. Air Force also has lost two games on the field and two off it. The Falcons enter at 2-2 overall and 1-2 in Mountain West play following last week’s 28-0 shutout victory over New Mexico.

The winner of this game also claims the Ram-Falcon Trophy, which has been awarded since 1980. Air Force leads the trophy series 25-15 (and 36-21-1 overall) and has won the past four meetings with Colorado State.

When Colorado State Has the Ball

Temple transfer quarterback Todd Centeio started in the Rams’ first game against Fresno State and posted 141 passing yards and 80 rushing yards, but he relinquished the starting role to incumbent starter Patrick O’Brien (who began his collegiate career with Nebraska) ahead of the Wyoming clash. O’Brien is a more productive passer, having completed 60.7 percent of his passes this season for 477 yards and three touchdowns with one interception and posting 8.5 yards per attempt, which ranks third in the Mountain West. O’Brien has scored twice on the ground as well, though he’s not nearly as mobile as Centeio. Both could play this week, but O’Brien will likely start behind an offensive line that includes three transfers who followed head coach Steve Addazio from Boston College.

The Rams have one of the most talented groups of skill position players in the conference, including running back Marcus McElroy Jr., wide receivers Dante Wright and Nate Craig-Myers, and tight end Trey McBride. A bruising runner listed at 235 pounds, McElroy has been slowed by injury this year and has been limited to 60 rushing yards and one touchdown on 31 carries — just 1.94 yards per attempt. Converted receiver A’Jon Vivens leads the squad with 164 rushing yards and 34 carries and has scored once as well.

McBride leads the Rams with 17 receptions for 268 yards and has been on the receiving end of all four of O’Brien’s touchdown passes, which also makes him the highest-scoring tight end in the conference. Wright missed the opener, but he has caught 15 passes for 255 yards in the two games since; both numbers rank among the top 20 in the league. Craig-Myers, a former Auburn signee and one-time five-star recruit, has yet to reach his massive potential, having caught six passes for 68 yards as a senior, but he could break out at any time.

When Air Force Has the Ball

Despite constant injury issues and a few COVID-related disruptions, Air Force leads the nation in rushing offense. Thanks in large part to a veteran offensive line led by All-America candidate Nolan Laufenberg at guard, the Falcons have averaged 336.5 yards per game on the ground. No other FBS team is averaging more than 300 rushing yards per contest.

Leading rusher Brad Roberts wasn’t even listed on the team’s official online roster ahead of the season opener against Navy, yet he ran for 103 yards and a touchdown against the Midshipmen. Roberts didn’t appear in losses to San Jose State or Boise State, but the sophomore reemerged last week with a breakout performance against New Mexico, gaining 177 yards and scoring three times on 28 carries.

Kadin Remsberg and Timothy Jackson combined for 1,795 rushing yards and 14 touchdowns on more than 300 total carries in 2019, but neither has played since Oct. 24. Jackson ran for 118 yards against Navy and followed up with 60 yards on 15 carries against San Jose State. Remsberg has been limited to 30 rushing yards on 10 carries. It’s unclear whether either will return this week. Nevertheless, in addition to Roberts, receiver Brandon Lewis has helped replace Remsberg’s production, having gained 180 rushing yards and one touchdown on 20 attempts, as well as 68 receiving yards on eight catches. Matthew Murla has helped fill in for Jackson, gaining 108 yards (including 64 last week) and three touchdowns this season.

Quarterback Haaziq Daniels has played in every game but has been banged up at times. Daniels has completed 17 of 31 pass attempts (54.8 percent) for 199 yards and one touchdown (to tight end Kyle Patterson, who has 140 yards on nine catches) and has run for 189 yards and two touchdowns on 38 carries (4.97 yards per attempt). Backup Warren Bryan is 3-for-6 for 38 yards as a passer and has gained 116 yards with one touchdown on the ground.

Air Force ranks third in the Mountain West and 19th nationally in total defense (324.5 ypg), but the Falcons have allowed more yards per play (5.67) than the Rams (5.26), which rank seventh in the conference and 57th overall with an average of 396.0 total yards allowed per contest. Colorado State is particularly stingy against the run, having allowed just 2.48 yards per carry — fourth in the country behind Marshall, Pitt, and Georgia.

But the triple option is a different animal, and Air Force has the nation’s best rushing attack despite a revolving door of playmakers. Should Timothy Jackson or Kadin Remsberg return, the unit could be even better. And with the Falcons able to dictate the flow of the game and limit possessions for the talented Colorado State offense, the margin of error for the Rams is small.

— Written by Nicholas Ian Allen, who is part of the Athlon Contributor Network and managing editor of . Follow him on Twitter .