Colorado State volleyball falls to No. 25 Colorado in growing and heated in-state rivalry 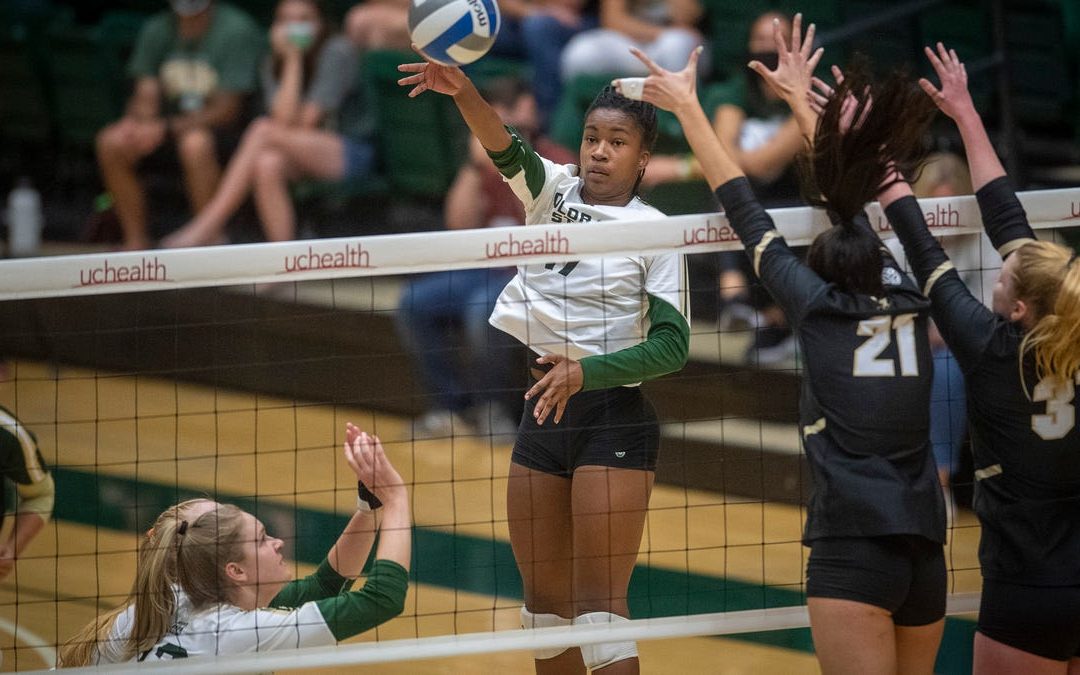 Colorado State volleyball falls to No. 25 Colorado in growing and heated in-state rivalry

The Colorado State football team won’t play another Rocky Mountain Showdown game against Colorado until 2023. And unless they meet in a November men’s tournament in the Virgin Islands, the Rams and Buffs might not meet again for several years in men’s basketball.

In volleyball, though, the CU-CSU rivalry is thriving.

Saturday, in their second meeting in three days, 3,711 fans were on hand at Moby Arena to cheer on the Rams in their match against No. 25 CU.

Although CU won in a three-set sweep (25-23, 27-25, 25-22), the intensity of a heated rivalry was evident on every point. Players scrambled to the scorers’ table, team benches and even the bleachers filled with CSU students to keep balls alive.

“CU’s a good team, and it’s good for us to play teams that are of this caliber, because we’ve got a few like this in the Mountain West,” CSU coach Tom Hilbert said afterward.

CU (9-0) overcame an early 7-1 deficit to tie the first set 18-18 before making just enough plays at the end to pull away. The second set was even tighter, with CSU (4-5) twice serving for set point before losing after allowing back-to-back kills. CU held a slight lead for most of the third set but wasn’t able to ever pull away.

Leah Clayton had 11 kills and was in on five blocks for CU, while Annie Sullivan had 16 kills and Jacqi Van Liefde 11 for CSU.

“I think it’s super important to play a team of that caliber, because they’re really good, and I think even just playing them we got better,” Sullivan said. “… I think we’re learning a lot about ourselves playing teams like that.”

That’s why Hilbert and CU coach Jesse Mahoney, a former CSU assistant under Hilbert, have started playing each other twice a year in nonconference play – once at CU’s Student Events Center and once at Moby Arena.

CSU swept the two matches in 2019, the first played for a new Golden Spike traveling trophy, and CU swept this year, winning in four sets Thursday night in Boulder and in a sweep Saturday in Fort Collins.

COVID-19 modifications put in place by their respective conferences prevented either school from playing nonconference matches in 2020.

The Golden Spike – a painted railroad spike from the Comanche Crossing Museum in Strasburg, where the Kansas Pacific Railroad laid its final tracks more than 150 years ago to form the first continuous chain of rails from the Atlantic to Pacific coast – was established by CU at Mahoney’s urging prior to the 2019 matches.

While CU holds substantial leads in its all-time series with CSU in football (67-22-2), men’s basketball (54-14) and women’s basketball (39-12), the Rams have been the dominant team in the in-state volleyball rivalry. Even after the two losses in three days, the Rams hold a 23-15 lead in the series, including two of the most-thrilling matches in CSU history – five-set wins over the Buffs in NCAA Tournament matches in 2001 and 2014 at Moby Arena.

There’s “an extra layer of pressure or that extra competition” every time the Rams and Buffs meet in volleyball, CSU libero Alexa Roumeliotis said Friday.

The volleyball ties between these two programs run deep, with Hilbert once having two CU graduates, including Mahoney, as his assistant coaches and Mahoney now having two former CSU players on his staff.

Mahoney, who is in his sixth season as CU’s coach, was a CSU assistant under Hilbert from 2005-2011. CU ssistant coach Evan (Sanders) Lobato was CSU’s setter from 2008-10, earning All-Mountain West honors in 2009-10 before transferring to Washington for her senior season. Samantha Peters, who is in her second season as CU’s director of volleyball operations, was a middle blocker for the Rams from 2011-13 and the MW Player of the Year as a senior in 2013.

“And there are a lot of players on that team we recruited,” Hilbert said. “There’s a lot going on when it comes to this rivalry and volleyball.”

An in-state rivalry between two schools separated by just 45 miles that is rapidly fading away in most sports. CSU and CU aren’t scheduled to meet again in football until 2023, and they’re not scheduled to play each other in the future in men’s or women’s basketball.

They’ll keep playing in volleyball, though.

The matches are too competitive not to keep the series. CU needs good competition to get ready for its grueling Pac-12 Conference schedule, and CSU needs the best nonconference matches it can get while playing in the Mountain West, which rarely gets at-large bids to the NCAA Tournament.

“We both believe it’s important for our respective programs,” Hilbert said. “I think sometimes you hear people in the bigger conferences going, ‘Well, it’s not a rivalry for us, we have everything to lose and nothing to win.’

“That’s not true. Jesse knows it, and he wants to play the matches, and so do I. It’s good for us.”