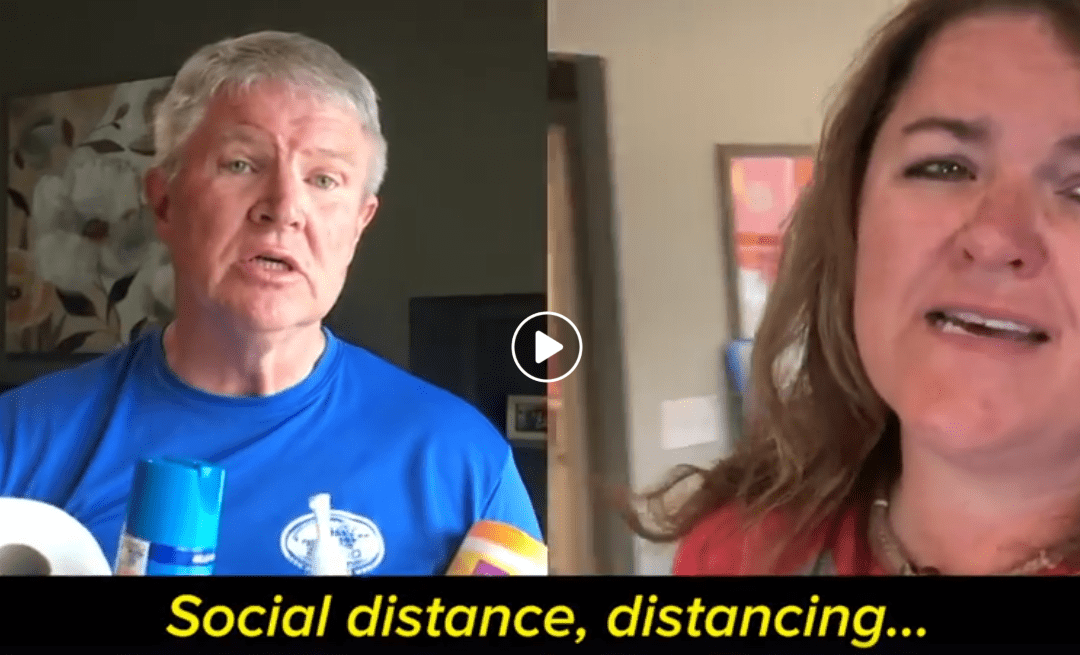 While we all stay isolated away from friends and family, two Colorado State University colleagues managed to stay connected and bring some joy to others by creating a coronavirus-themed music video.

Over the weekend, CSU colleagues Jen Smith and Tony Phifer made a coronavirus-themed music video to the tune of “Shallow” by Lady Gaga and Bradley Cooper called “Social Distancing the duet.”

In the parodied lyrics, the two sing about many things we’ve all become overly familiar with now: Staying indoors, continuously cleaning, missing friends and family, and a lack of toilet paper at the store.

They also sing about what social distancing is like, even using some tips from state health officials as lyrics: “Why’s it so hard to see you need to stand six feet away from me.”

“It was really kind of an antidote for the blues people have right now,” Phifer said. “If it gives people three minutes of smiles, our mission was accomplished.”

The video was filmed about 65 miles apart, Phifer said, with Smith at home in Denver and Phifer at his house in Fort Collins.

“It was a fun thing for two people stuck in their houses,” Phifer said. “… People could just use something to smile about for a few minutes.”

Phifer, Smith and another CSU colleague, Ashley Manweiler, wrote the lyrics, and Smith credits her favorite lyric to Manweiler: “Don’t touch that surface, those germs can hurt us.”

Smith said once the lyrics were written, it was easy. She sent Phifer some tips on taking video and asked for him to send clips of him being bored — what she got back was hilarious, she said.

“It made this video so funny,” she said.

Phifer’s clips in the video show him sadly playing fetch with his dog, singing while holding cleaning supplies, and — Smith’s favorite — him using a measuring tape to check how far away six feet was from himself.

Smith spent Sunday afternoon editing the clips together. After posting on her Facebook page, she said she was overwhelmed by the support and engagement the video got.

“I just really wanted to bring a little levity to people,” Smith said.

Smith included a line about wishing she could hug her grandpa, with hopes that resonates with younger people who may not understand how they could impact more vulnerable people during this pandemic.

“I’m not sure young people are taking this as seriously,” Smith said.

Phifer and Smith filmed their singing together once before, in a “Carpool Karaoke”-style video while they were driving in West Virginia last May to meet CSU President Joyce McConnell for the first time. Phifer said they were told it was tradition to sing “Take Me Home, Country Roads” by John Denver while driving into the state — so they sang it and recorded it.

“Our career has been dormant since last May until this came,” Phifer said.

Much of their newest video was filmed selfie-style, with Phifer’s wife helping him with some shots. When she wasn’t helping him, he said his wife was usually texting Smith making fun of him messing up lyrics.

“There’s at least a 20-year age difference between us, but we’re almost like brother and sister,” Phifer said.

Phifer’s singing career extends beyond his videos with Smith. He said he’s sung at more than 300 weddings and 400 funerals, and he’s a member of the Larimer Chorale.

Phifer said Smith’s video, design and social experience combined with her singing skills is what made this video happen.

“She is maybe the single most talented person I know,” Phifer said.

Editor’s note: We are committed to bringing you accurate, up-to-date information on coronavirus in Colorado. But we also want to share the good things happening in our community during this trying time. As such, this story, and many others, are being provided free for all to read. Help us continue this important work by subscribing to the Coloradoan.