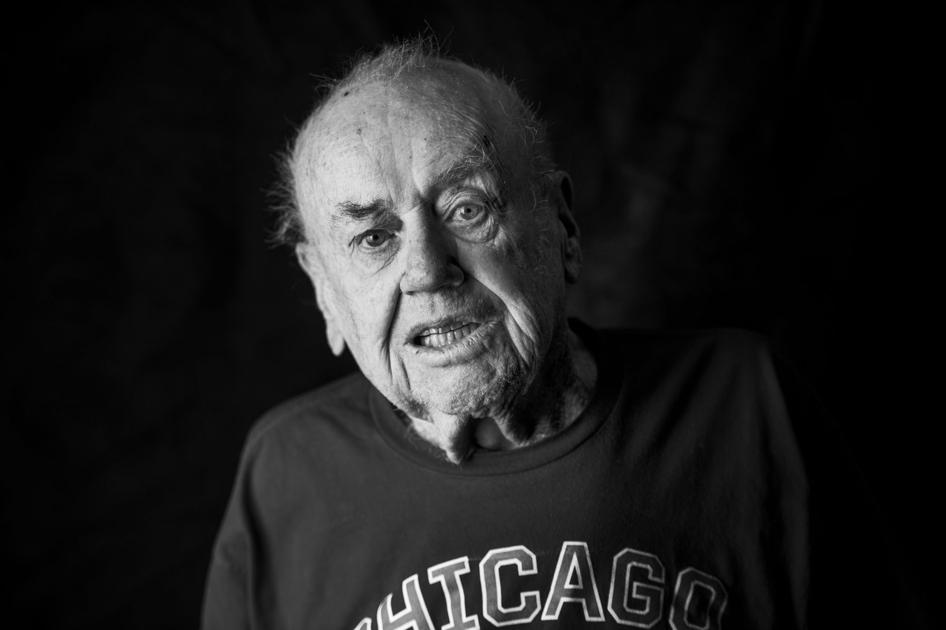 While attending radio operator school in Sioux Falls, S.D., in 1944, before shipping out to the European sector, the Chicago Heights teen watched two military planes collide midair. The horrific crash happened directly over the heads of the young Army Air Forces soldiers in training.

“We were in the final week of school, and in the last week, you flew,” Schmitt recalls.

The planes weren’t the B-17 bombers used in combat, but training aircraft.

“We were out there doing calisthenics, and two planes were coming in and this kid said, ‘They look close together.’

“One came down and topped the other right over the barracks. It ate the tail off that one plane.”

Schmitt and others at the military camp started running as fast as they could, past the gate. Schmitt said he wanted to keep running and not go back.

“The one plane killed several in the barracks, and the other landed in a field. Close to 28 people were killed. That’s horrible to see, especially when you want to fly.”

But Schmitt pulled up his bootstraps, became a sergeant with the 423rd Bomb Squadron and spent his wartime service and the remainder of his four-year hitch in France, Germany, England, Gibraltar, Spain and Africa.

At 94, he rarely reminisces, but the stories are as sharp in his mind as if the events unfolded yesterday.

Just one week after the plane accident, the new recruits took several long train rides before departing on a boat from a New York port for a sardine-packed journey to battle-engulfed French shores.

“Damn right we were scared.”

The worst part, Schmitt said, was not knowing where they were going, what they would encounter and whether they would return .

“Over and over, it was, ‘You’ll find out when you’re supposed to know.’”

As it were, the GIs docked at Le Havre, in the Normandy region. Western Allies bombed the area repeatedly in liberating the city, on D-Day, the largest seaborne invasion in history on June 6, 1944, and for months afterward.

“The worst fear I had the whole time was landing where the invasion was,” he said.

The aftermath of the battle became another unforgettable image, he said, and contributed to the soldiers’ angst .

“We didn’t know what we were going to do, but we knew what we had to do.”

Schmitt’s experiences led him to encounter the dark side of warfare, including looting and a flourishing black market, and prostitutes at every turn. There was gambling on ships.

“I never touched anything like that,” he said of the rampant vices.

Cigarettes were a prime commodity on the black market, and money was funny: “You’d get paid and the old money was no good, you had to use the new money,” he said. Schmitt earned $32 a month.

The food also left a bad taste for Schmitt.

“You’d stand there with your mess kit, go through a line, stand and eat, and somebody’d say, ‘What the hell are we eating?’ It’d be beef tongue. That’s how the joys of war were.”

Schmitt registered for military duty at age 17, an expectation of his family.

Drafted when he turned 18 in January 1944, Schmitt didn’t get to finish high school and never received a diploma.

“I always knew how to turn a radio on, but I didn’t know how it worked,” he said. “Something I’d never seen before in my life was the inside of a radio.”

Training was complex and tough, but Schmitt became proficient at his job of radio operator, climbing over the bomb bays in planes to his solitary perch in the rear, where he would act as a scout and communicator. Because of his aptitude, Schmitt said the squadron commander often requested him for missions.

Like a cat, he used up several of his nine lives, sometimes just “being stupid,” and other times when the conditions of war played out.

There was the time his plane almost ran out of runway at Gibraltar, where the next thing is water.

He also remembers hitchhiking to another town one night in Germany with a buddy and accidentally wandering into a beer hall filled with German militiamen.

“That could have been the end for us,” Schmitt said.

Instead, he and his friend hightailed it out of there and were able to hitch a ride back to camp.

Schmitt saw and experienced things that would disturb and haunt him to this day.

“A lot of people died; I felt I was spared.”

After a grueling, bitter cold return trip on the Atlantic Ocean, Schmitt got a job stateside setting up telephone lines and communication for Northwestern Bell customers, then Mountain Bell in Colorado, a career he had for 38 years.

He married a sweetheart he knew before he left, the couple adopted two children and relocated to Colorado Springs when the phone company transferred Schmitt here.

His service to the military continued in his civilian work, as he installed telephone communications at Peterson Air Force Base and Fort Carson.

His wife, Ardis Schmitt, was elected El Paso County Clerk and Recorder in 1979 and held the position until retiring in 1997.

Schmitt has kept meticulous scrapbooks, including photos and memorabilia such as money and train tickets.

One of his favorite post-military stories was the time he and Ardis came home and found football quarterback Fran Tarkenton sitting in the living room of their Minneapolis home that they put up for sale.

The Minnesota Vikings franchise was new to the city, and Tarkenton and his wife were looking for a place to live.

“He wanted to buy my house,” Schmitt said.

But the real estate agent told the Schmitts that he didn’t know if Tarkenton had enough money to buy it.

“They didn’t make what they do now,” Schmitt said.

Schmitt did spend plenty of time on the Vikings’ football field, making sure the wired communication network for the coaches and other employees was set up and working properly.

“I had to take care of getting in all their communications,” Schmitt said. “It was my job to get it done.”