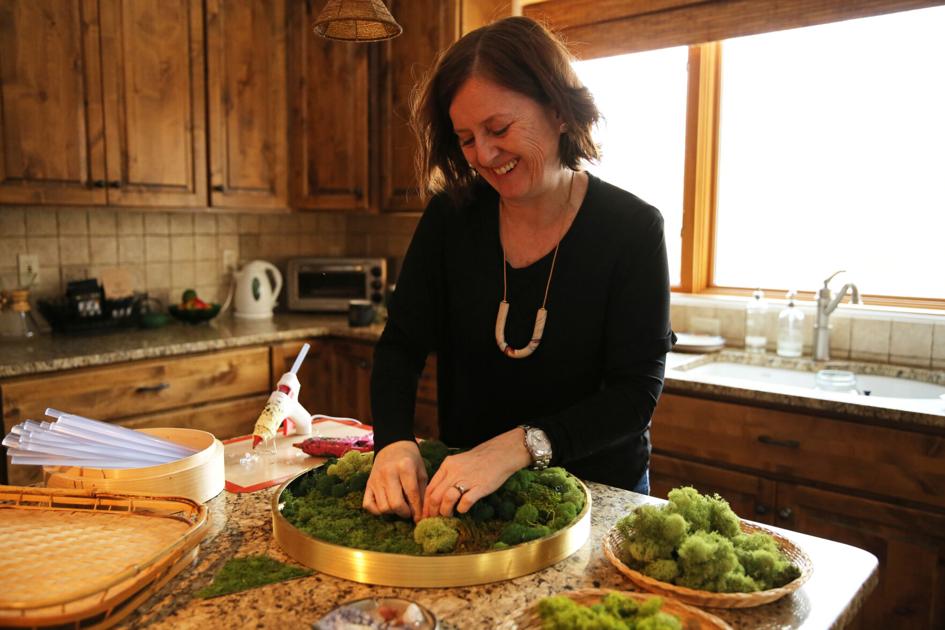 Something good came out of all those Zoom calls for Courtney Arnstein: She started to get a lot of compliments on that thing behind her.

Arnstein’s backdrop showed something far cooler than bookshelves or a blank wall. And people on the other side of the screen couldn’t help but ask, “What is that?”

It was a large piece of artwork made of moss and sticks, forming a beautiful and bright green masterpiece. Arnstein made it herself.

The plant lover was looking for more ways to bring nature into her home.

“When COVID started, I couldn’t go buy plants,” she said. “That’s what gets me through the winter blues … having plants in the house.”

After showing off the moss art on Zoom calls, interest in her creations started to grow.

“I think people are really focusing on their homes right now,” she said. “They’re wanting their homes to be beautiful and full of nature.”

Moss art is a low-maintenance way to do just that, she said.

Arnstein, 52, had just recently taught herself how to turn preserved moss into an appealing wall piece.

Handmade moss art is now a big part of her vintage furniture and home decor business, called Modern Magpie, which she started in 2016. She sells her work at Eclectic Co.’s two shops in Colorado Springs.

Business spiked ahead of Christmas, she said. The pieces were so popular, she couldn’t keep any for herself. She even sold the piece that hung in the background of her virtual meetings.

Arnstein got the idea for creating the natural art after seeing a piece in a friend’s living room.

“I thought it was the coolest thing I’ve ever seen,” she said. “And I wanted one in my house.”

She set out to make her own. She starts by thrifting a frame, out of an old window or mirror or drawer. She then chooses from a stock of preserved moss, which she gets from a wholesaler, to make an abstract image inspired by mountains, the skyline and movement in nature. She uses hot glue to keep the moss in place. “It’s kind of like a puzzle to get the look I want,” Arnstein said. “And I’m envisioning, ‘How would nature do this, if this is what nature was doing?’”

Arnstein said she has always been into thrifting and repurposing, but this was her first time selling her own art.

Running her own business is new, too. Arnstein spent most of her career in the nonprofit sector and as an event planner. When her father got sick several years ago, Arnstein quit her job to go take care of him in Iowa. When she got back to Colorado Springs, she decided to follow her dream.

From the beginning, plants were part of her aesthetic. And part of how she copes during the winter.

“Having plants gives me that sense of happiness and hope,” Arnstein said. “It just fills me with joy.”

In her section at Eclectic Co., it’s common to see a sign that says, “Plants make everything better.”

“Basically don’t touch it or put it in sunlight,” she advises.

Arnstein estimates her pieces could last 15 or 20 years.

“It’s a really great way to bring nature into your home,” she said. “And I think people are really searching for that.”