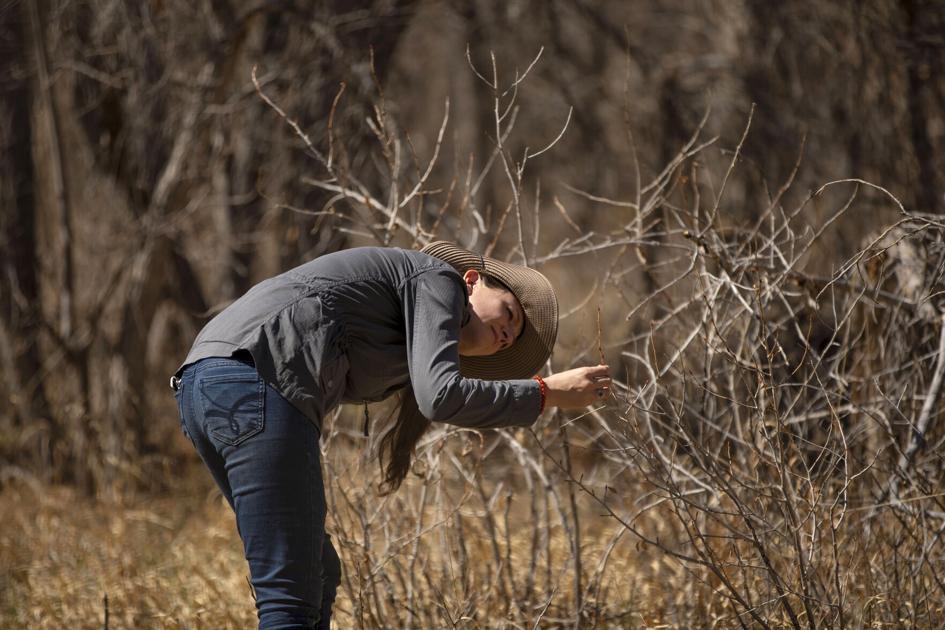 Scroll all the way back, Summer Lajoie says.

Back to when she was returning to nature. She’d post about how pretty flowers look in front of mountains far in the distance. She wondered how long birds would nest on a dying pine tree. Other times, she’d form a bundle of leaves into a circle or spiral or flower. She openly shared her simple love for nature’s simple creations. But not many knew what was happening behind the screen.

A glimpse of the darkness comes from a post about a flower trying to bloom in winter. “All life struggles to survive,” Lajoie wrote.

Her caption continued: “Looking to nature to remind me that my hard work will pay off and I will weather the cold nights and scorching days. I will survive the droughts and devastating floods. I will live through the hard times and I will bloom again.”

At the time, Lajoie was going through hard times. After giving birth to her second son, she started having panic attacks. She didn’t feel motivated to wake up or get dressed or brush her hair. She soon realized she was suffering from postpartum depression and anxiety.

She started seeing a counselor, who suggested she spend time in nature. So that’s why Lajoie did.

Even if it was just five minutes, she found time every day to be outside or around nature. Sometimes she’d go on long mindfulness walks. Sometimes she’d step outside and try to feel the air moving around her. Sometimes she’d lay down on the ground and gaze up at whatever was above, clouds or the blue sky or a tall tree. She’d sit and look at a plant for a few minutes.

“It was this awakening to a simple practice of just observing nature,” she says. “Whatever it is that’s happening, just taking a moment to observe it and what my emotions are in that moment.”

Like when she’d get caught in the rain. She’d try to not be bothered by it.

“Instead of dwelling on the fact that you’re wet and shivering,” she said, “you try to think, ‘How often do you get the opportunity to feel the rain on your face?’”

As she connected with nature, she tried to quiet her worried thoughts.

“When your mind does start to go, you let that thought pass by like a cloud in the sky,” she said. “You see it and recognize it. And you let it pass.’

For six months, she did something this every day and posted about it on Instagram.

Along the way, Lajoie says she started to heal. Both her mind and her body.

On some level, Lajoie had always known nature’s healing powers. From the time she was born to the age of 5, she lived in a small cabin her parents built in the woods of Pagosa Springs. They moved to the city when her sibling was born.

“I feel like I brought the forest back with me,” she said. “There was always this calling to nature.”

She went on to pursue a career in photography, which she often puts to use on her hikes and observations of nature. After having her two sons, though, she took time off from work.

After that stretch of six months, Lajoie wanted to keep going down the road she’d started. She asked herself, “How can I bring more of this into my life?”

She also felt like she was ready to go back to work, which led Lajoie to getting certified as a Tinkergarten leader teaching outdoor play-based classes to kids.

After one class, a parent had a question for Lajoie: “Do you teach this for adults? I want one for me.”

Well, no. But Lajoie knew of something similar. And, in the back of her mind, she’d been wanting to try it: forest bathing, or forest therapy walks. She signed up for training with the Association of Nature and Forest Therapy.

As she describes it on her website, forest therapy is “much more than a gentle stroll through the woods.” And it often requires a guide like her.

“The guide gently invites participants to slow down, bring awareness to the body’s senses, and practice mindfulness by closely observing nature and sharing what they are noticing,” she writes online.

Oh, and the health benefits? They range from reducing depression and stress and insomnia to increasing overall wellness.

With all of those positives, Lajoie has been on a mission within the past year to lead forest therapy walks in Colorado Springs.

She’s doing so twice per month at Bear Creek Nature Center. During the walks, Lajoie goes through a series of exercises.

“For the most part, the prompt is always the same,” she says. “What are you noticing?”

People can talk or just listen. They can just walk or venture to the side to notice an interesting tree or flower. Lajoie says the openness of the concept draws people in.

“It’s an opportunity to be heard,” she said. “It’s that chance to connect with people that way. And how often do we get that? How often do you get to describe the feeling of air on your skin?”

For her, that sort of thing turned her life around. Now, when she’s having a bad day, like when her kids are crying and she’s late cooking dinner, her mind can go back to nature.

“It allow me to take a breath and slow down,” she said. “It allows me to think that this is a hard moment but it’ll pass.”