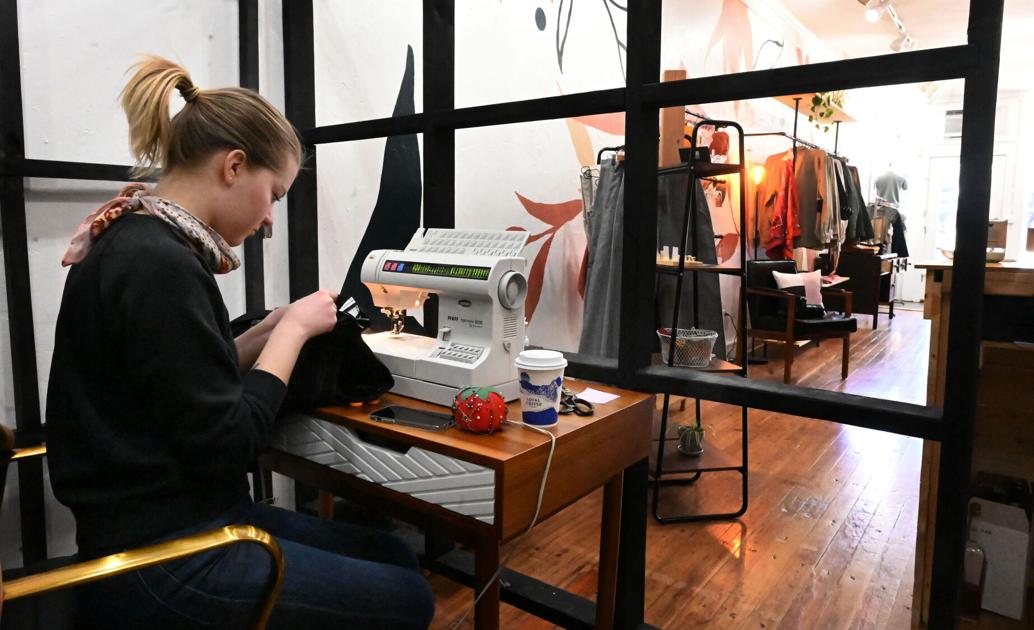 Rebecca Moon has had a flair for fashion for as long as she can remember.

“As a kid, I was always crafting,” she says. “I would knit or do needlepoint stuff. Then I learned to sew and kind of realized I had a knack for it.”

Her entrepreneurial roots are just as deep. As a young girl, she would set up a store or a little movie theater at home. “I’m sure my parents loved having to pay me to watch a movie in our own house,” she says.

With that background, perhaps it’s no surprise that she combined both passions and opened her own clothing store, Moonbeam Clothiers, last year in downtown Colorado Springs.

The surprising part was that she opened in the early stages of a pandemic — something definitely not in the business plan.

Gov. Jared Polis’ order shutting down Colorado bars and restaurants came just days before the planned opening of Moonbeam Clothiers last March. Moon and her boyfriend, now husband, were constructing shelves for the shop when word came down. Figuring retail would be next, Moon put the opening on hold; the grand opening didn’t come until late May. On the plus side, she says, the delay gave her more time to plan out the business — “and make a whole bunch of masks.”

Moon, 27, a Springs native, grew up near downtown. She earned a bachelor’s degree in business administration and international business from the University of Denver. After that, she applied to graduate school to study design. When she didn’t get into the school she wanted, she decided to take a year and develop her portfolio.

“During that time,” she says, “I started experimenting with my designs and making things, and that’s when I started developing my own business.”

She decided not to go back to school; she also had no interest “in moving somewhere super urban and working for a big design house.” Her own business remained the dream; in the meantime, she paid the bills working in the hospitality industry — restaurants, cafes and bars. She continued doing so even when she opened the store, figuring she would need a secondary income — though shutdowns during the year made that source of revenue uncertain. These days she bartends at CO.A.T.I when she’s not at the shop.

“That was always the plan,” Moon says of the limited hours. If business picks up to where she can quit her secondary job and hire an employee, she says, she’ll increase those hours.

Moonbeam, as described on the shop’s Facebook page, offers “a curated selection of sustainable and ethical menswear, womenswear, and home goods, along with a maker space for custom clothing and alterations.” Moon says she selects “things that are kind of trendy but not too trendy where you’re going to throw it away next season. I want it be stuff that’s going to last you a very long time and serve you well.”

Some of Moon’s designs are also on display. She describes her style as “pretty minimalist, very classically inspired. … I get a lot of inspiration from architecture.” Unless it’s custom work, she adds, “I like to design stuff that isn’t super form-fitting, so it looks really good on different body types.”

Eve Carlson, owner of Eve’s Revolution in Old Colorado City, is a fan of Moon’s work; she has featured Moon as a local designer in her shop.

“She’s a special gal,” Carlson says. “I really love what she does.”

Moon considers Carlson a mentor. When the two met for coffee a couple of years ago, Moon outlined her vision for her business.

“She’s such a hard worker and super passionate,” Carlson says. “She sat down and told me exactly what she was thinking, and she made it happen.”

Eve’s Revolution celebrated its 20th anniversary in September. Last year, Carlson says, was challenging — even “a little terrifying for a while.” But changes to the business, such as offering private shopping experiences, and having a loyal customer base have kept her going. For someone who just started a business, she says, “I can’t even imagine.”

Moon acknowledges it hasn’t been easy. “My whole concept is based around the experience of being in the shop and talking about the clothes and touching the clothes and seeing them. So yeah, that’s been tough to make that work.”

The pandemic, of course, has been a challenge for others as well. Of her fellow downtown retailers, she says, “I think everyone’s trying to be optimistic, but it sounds like everybody’s struggling.”

The holiday season, she says, “was good comparatively, but still not what any of us would really expect for retail downtown. And selling online, there’s just so much competition, it’s really difficult to make that worth anything.”

But there’s good news, too. “I’ve noticed  the alteration side of my business is growing a lot,” Moon says. “I think others have retired, so perhaps there’s a void there.” So her focus may shift a bit less on retail and “more of a maker presence.” But as far as the future of Moonbeam Clothiers, she sums it up in one word: “Uncertain.”

At least she has plenty of people in her corner, including Carlson.

“I’m just so proud of her that she made it all come to fruition,” Carlson says of Moon. “She’s an amazing young woman.”