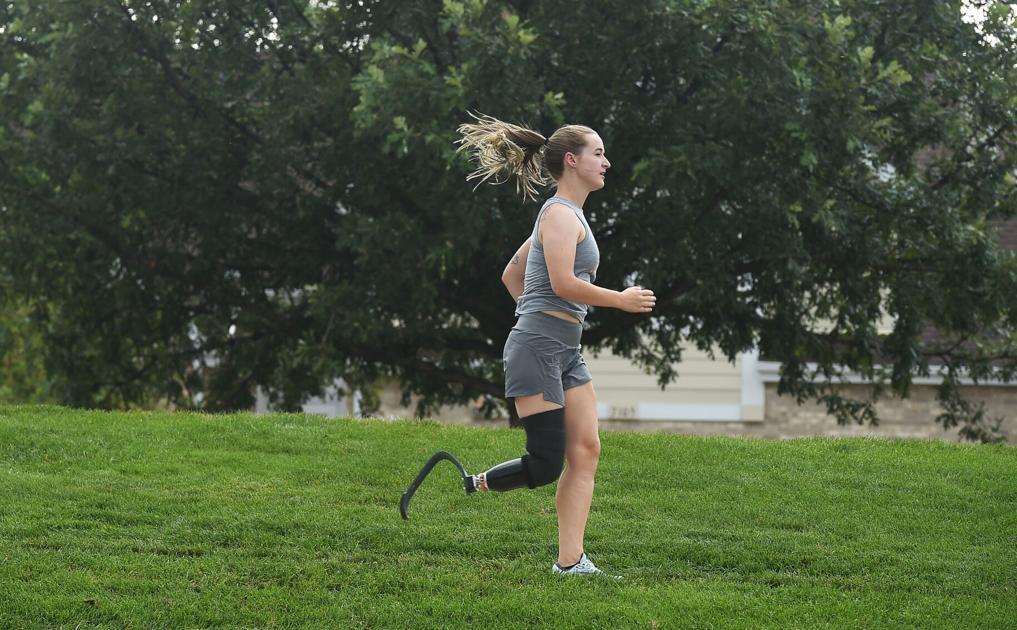 On the drive into her new city, Jo Beckwith remembers seeing the field out of the car window. Big and open and green. A dreamy place for an adventurous 10-year-old girl with a dream of riding a horse freely for miles while her hair blew in the wind.

Until it turned into the day that changed her life forever.

Beckwith went on a horse ride with some friends in the open field. She was on a former racehorse that “liked to go fast,” she recalls. She remembers the horse’s name, Georgia. She remembers her friends having more experience riding than her. A few miles from the barn, she remembers Georgia stumbling and falling off the horse. She doesn’t remember much else.

When she came to, she thought she felt fine. Until she tried to stand.

Hours later at the emergency room, Beckwith had her first of many conversations with doctors about her right ankle, which had been uniquely shattered. The end of her ankle had broken off and shoved an inch of her ankle bone up into her leg.

“It was a cool day for doctors, because they’d never seen a break like that,” Beckwith says now. “That’s something you never want to hear.”

That day in the field was 17 years ago. Beckwith has since heard lots of things you don’t want to hear from doctors. No more running. No more soccer. No idea why she’s not healing the way she should.

As she summarizes those years, a series of things went wrong for her ankle to never be quite right again. And worse than just not right.

From age 13 to 27, Beckwith was in constant pain. Surgery after surgery failed to offer relief.

“I was going to keep trying to live my life,” she said. “I didn’t want that hold me back, as much I could help it.”

That meant trying things like boxing, wrestling and MMA fighting. She met her future husband while practicing jiu jitsu.

Soon, though, she says “everything became too painful.”

She got to a point where she could barely take her dog on a walk. So, at 27, she asked herself a big question: Is it time to amputate?

In the summer of 2018, she asked the same question to her doctors, who had previously brought up amputating her ankle later in her life, like in her 60s. She told them, “I can’t continue like this.”

“It’s a bizarre thing when losing part of your body starts sounding like a good idea,” Beckwith said. “When it was restricting life and so negatively affecting every aspect of my life, I had to make the decision that this is the way it’s going to get better.”

She made up her mind. Her parents, brother and husband, who had seen her years of anguish stemmed from that ankle, understood. Others in her life weren’t so sure.

“There were some weird conversations to be had,” she said. “A lot of people think, ‘Why would you not do everything in your power to keep your limb?’”

Beckwith had 14 years of reasons.

“Everyone had their opinion,” she says, “I’m the only one who was living in that body.”

Before the amputation surgery, she tried to prepare mentally. She wanted to give her right foot a proper goodbye.

“I’ve never been a sentimental person, but this was such a monumental thing,” she said. “I felt dirt and walked in the snow, all the sensations I wasn’t going to feel anymore in that foot.”

And she wrote a breakup note in Sharpie directly on her ankle.

Part of her note read, “Dear ankle, it’s not me, it’s you. We’ve had some good times together, but it is time for us to part ways. I wish you all the best! — Your Blood Supplier.”

Some friends and family members added their own notes, saying things like, “Have a nice trip” and “I won’t miss you. You brought my Jo pain.” All of the farewell notes were written underneath a dotted line that Beckwith drew around her leg along with a pair of scissors.

A few months after the surgery, Beckwith made a video called “How I Said Goodbye to My Ankle.” She uploaded it to her YouTube channel, where she had previously been posting updates and videos about mental health.

That video went viral, gaining 8 million views and attention from media outlets such as People magazine and The New York Post.

Once again, Beckwith’s life changed. The moment of internet fame came with good and bad.

She just wants to be known for her full story.

“I want people to know that we are all capable of persevering through way more than we think we can,” she said. “It’s OK to be human.”

Beckwith has turned those hard-fought lessons into her life’s work. She describes herself as an advocate, writer and public speaker “who passionately believes in the incredibly perseverant capacity of the human soul.”

Beckwith’s social media paints a picture of a full-of-life 30-year-old with long blond hair, a shiny smile and clever sense of humor. She posts funny-faced selfies and photos of her cuddly cats and dogs.

She documents coffee spills and surprise flowers from her husband and morning walks and that time she wore a shirt that says, “Puppies make me happy.”

That’s been a journey on its own, as Beckwith had to learn how to stand, walk and, well, how to do everything with her prosthetic.

She gets serious, too, like when she writes about the exhaustion of living with chronic pain and illness as well as depression.

“When I have bad health days, like today, I feel incapable and incapacitated and like I’m excluded from being able to pursue life,” she wrote in one caption. “Like my body will always stop me and there’s nothing I can do.”

“I want to bring light to things I face and people with disabilities face,” Beckwith said. “Knowing you’re not alone is really important to me.”

Since the surgery, she says her life has changed for the better. She’s tried new sports and returned to old ones. For the first time since she was 13, with help from a blade for her prosthetic leg, she went running. She even got to run with her dad again at Garden of the Gods, something she’s missed doing

“The freedom to be able to move like this isn’t something I take for granted,” she wrote after a recent run. “It feels amazing.”

A few months ago, Beckwith went back to the field where her ankle broke — but without her ankle. Her hair blew in the wind while she looked around and retold the story that she’s told so many times. A film crew made a minidocumentary about it.

“It’s a peaceful field, isn’t it?” she told them. “It’s not a bad place to have your life changed forever, if it’s gotta be somewhere.”