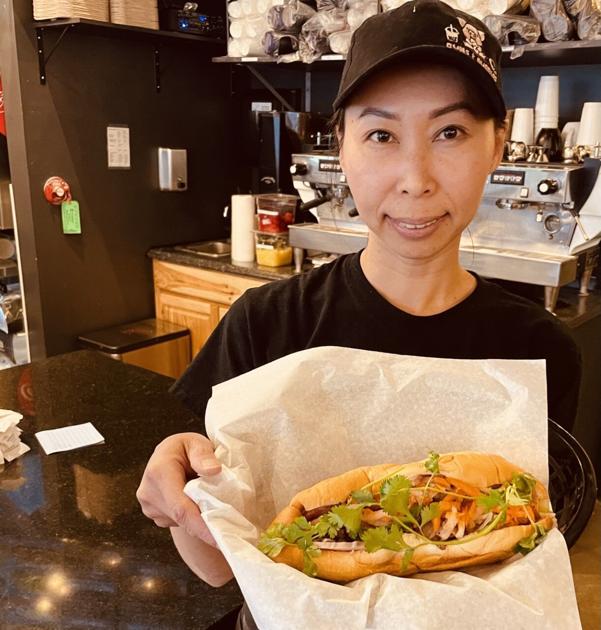 The cafe is owned by Halina and Bao Le. Recipes are courtesy of Halina’s mom and grandmother. Her mom comes to the cafe to prepare many of the dishes several days a week. Halina bakes bread daily for the bánh mì, the star of the menu, with 13 combinations from which to choose.

There’s the classic Vietnamese-style combination bánh mì ($6.50), which has Vietnamese-style ham, sausage and barbecue pork topped with fresh and pickled veggies. There are several nonclassic offerings like a cheese steak bánh mì ($8.50) with lean beef tenderloin, grilled onion and bell peppers, topped with provolone cheese. We could not get enough of the house special, Bánh Mì Pho Dip ($8.30), which is a spin on a French dip.

“We got the idea for this bánh mì on a trip to Hawaii,” Halina said. “We had it and decided it would have to be on our menu too since my mom makes delicious pho (beef bone broth).”

“My mom cooks the brisket for four hours to get it very tender,” Halina said. “I have a Korean friend who makes the best bulgogi. So I got her recipe and my mom makes it too for our bulgogi bánh mì.”

Vegan on the road

The Green Machine Grill, a food truck selling plant-based barbecue dishes, hit the road this month with an event at Burrowing Owl. Stacey and Steve Gunter with their five children operate the business.

“We use everything 100% vegan,” said Stacey. “We use Impossible Meat burger patties, ‘chicken’ sandwiches and Qbobs, (kabobs) made with marinated vegan ‘steak’ (sietan), grilled onions, mushrooms and bell peppers on a bamboo skewer.”

The Colorado Liquid Arts Passport is available at taste.coliquidarts.org. Passport holders can choose from five- or 90-day passes from four scenic regions: Denver & Cities of the Rockies, Mountains and Mesas, Pikes Peak Wonders and Rockies Playground. With discounts valued up to $300. Visits include wineries, breweries, cideries and distilleries.

The second Colorado Springs Cheba Hut “Toasted” Subs, a marijuana- inspired sandwich chain, has opened at 5697 Barnes Road. Great bread is a hallmark for the sub chain, touted as the place to find a cure for the munchies.

Each Cheba Hut has a unique personality expressed in huge, colorful wall murals. For the first Colorado Springs location, 3171 N. Chestnut St., the artist went with 12 mythological gods since the eatery was near Garden of the Gods. The mural in the new place is a tribute to famous people from Colorado Springs history including Gen. William Palmer, Lon Chaney, Elvira and Nicola Tesla.