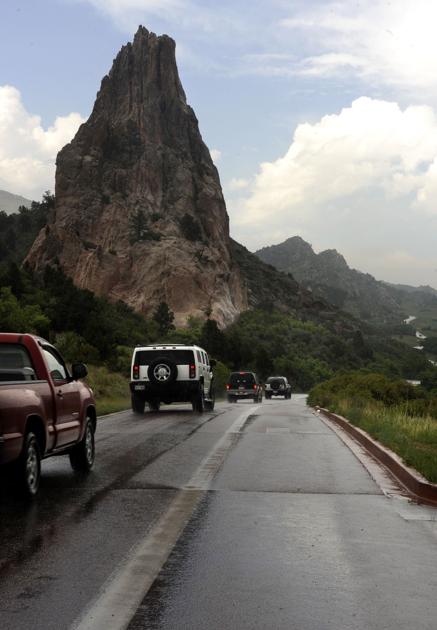 High chances of rain and cool temperatures are in store for the holiday weekend in Colorado Springs, the National Weather Service in Pueblo said.

Storms are expected to start Saturday afternoon and continue through the night, the agency said.

Saturday is forecast as the warmest day over the weekend with a high of 75 degrees, the weather service said.

“Plan on mainly dry mornings, with showers and thunderstorms developing in the early afternoon,” Gazette news partner KKTV reported. “With any storm that forms Saturday, the main threats include large hail, damaging wind and heavy rain that could lead to flash flooding.”

Sunday high chances of showers are expected throughout the day at a 90% chance with no signs of precipitation letting up overnight, the weather service said.

Memorial Day brings more of the same with a 80% chance of showers to start the day and thunderstorms likely in the afternoon, the agency said.

Sunday and Memorial Day are expected to be in the low 50s and 60s, the weather service said.

Friday starts off sunny but showers and thunderstorms are likely after 2 p.m. at a 20% chance, the agency said.

Temperatures are likely to reach 77 degrees Friday with winds between 5 to 10 mph, the weather service said.

Overnight, skies are expected to be partly cloudy with a low of 51 degrees and winds between 5 and 10 mph, the agency said.

Intermittent storms continue throughout next weekend, the weather service said.

Here’s the rest of this week’s forecast from the National Weather Service:

Saturday: Increasing clouds, with a high near 75 degrees and winds between 5 to 10 mph. Showers likely and possibly a thunderstorm between noon and 3 p.m., then a chance of showers and thunderstorms after 3 p.m. Chance of precipitation is 60%. New rainfall amounts between a tenth and quarter of an inch, except higher amounts possible in thunderstorms.

Sunday: High near 64 degrees and winds between 5 to 10 mph. Showers and possibly a thunderstorm. Chance of precipitation is 90%. New rainfall amounts between a quarter and half of an inch possible.

Memorial Day: High near 59 degrees and winds between 5 to 10 mph. Showers likely, then showers and possibly a thunderstorm after noon. Chance of precipitation is 80%.

Tuesday: Mostly sunny, with a high near 72 degrees and winds between 5 to 10 mph. A 20% chance of showers and thunderstorms after noon.