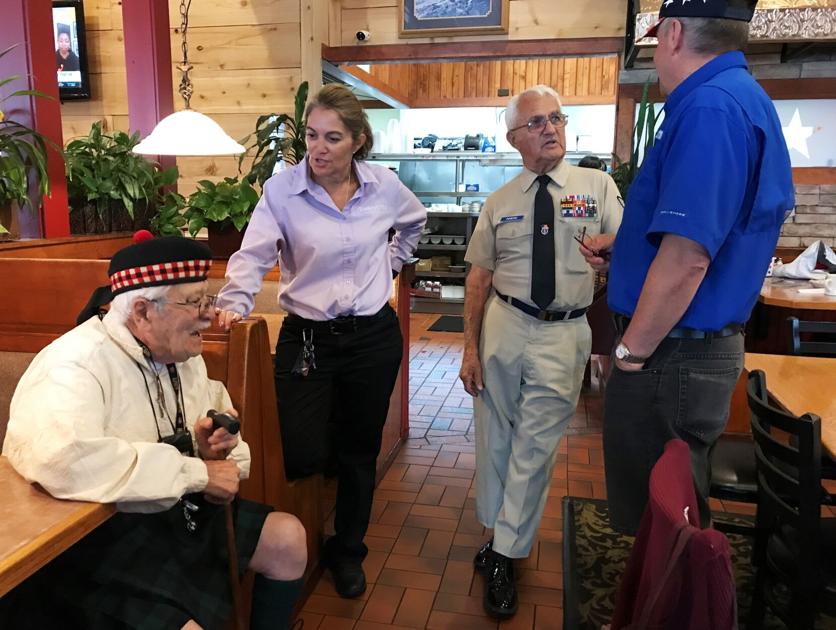 Roger Fortin is quite the social butterfly. The 78-year-old retired airman fluttered from one group of veterans to the next Wednesday during a weekly gathering at a Colorado Springs restaurant.

For the past 13 years, Fortin — who served six years in the Navy and another 17 in the Air Force — has been organizing social gatherings and lunches for military veterans and their spouses.

It is something he originally started in the 1970s when he was stationed at NORAD in Cheyenne Mountain. Fortin organized monthly dinners at the former Candlelight Inn on North Nevada Avenue where he said more than 100 people would show up to watch and laugh as an unknown guest would get roasted with friendly jokes.

While friendly teasing isn’t directed at any specific person now, there is plenty of laughter and joking amongst veterans each Wednesday at Black-eyed Pea in the Citadel Crossing Shopping Center.

“The staff goes out of their way and really treats us great,” Fortin said.

Gloria Varner, general manager of Black-eyed Pea who had a brother serve 23 years in the Marines and a son serve five years in the Navy, loves having them.

“It is an honor and I feel blessed to have them all here every week,” Varner said. “It is wonderful getting to know their stories.”

“I tell everybody I do it for selfish reasons because I enjoy it more than they do.

“They all have a common core of experiences,” Fortin said. “A lot of these guys have no family here in Colorado Springs. They retired here or they retired and moved back and now their spouses are gone. My primary concern is making sure everyone feels welcome.”

Bonifacio Duran, 90, who served in the Navy from 1949 to 1953 during the Korean War, sported a kilt during lunch that he wore for many years as part of the Pikes Peak Highlanders. He attended the gathering with his son and said he enjoys meeting new people.

Blake Lindner, 65, a 1978 graduate of the Air Force Academy and retired colonel, loves attending the luncheons with his 95-year-old father-in-law who was drafted into the Army in 1944 and fought in the Battle of Okinawa.

“I look forward to this every week,” Lindner said. “This recharges my batteries. These are my kind of people. The life experiences these people have … being stationed in Europe and Asia, it waters your eyes. They made history happen.”

Bill Roche, 96, a B-17 waist gunner was shot down twice during World War II. He joined the Air Force in 1949 and served as a Russian linguist for 30 years.

“We talk everything from military to baseball and politics,” Lindner said. “You can look at the smiles on the people’s faces and you know there is no other place they’d rather be.”