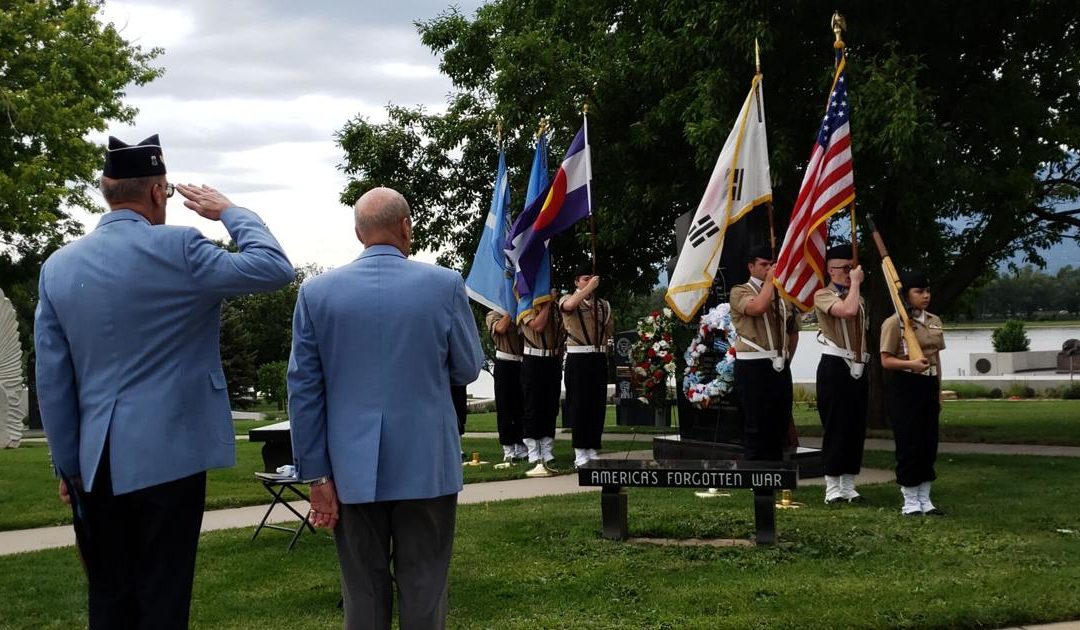 The Korean War was brought to a truce on July 27, 1953, with the signing of an armistice agreement between the United States, the People’s Republic of China, North Korea, and South Korea.

For many, that was the start of the conflict fading into being known as America’s “Forgotten War.”

But the ones who were there never forgot.

Veterans and their families gathered Saturday morning at the Korean War Monument in Memorial Park to commemorate the signing of the armistice, and the end of the Korean War. The day the war ended is commemorated every year by the Dutch Nelsen Chapter of the Korean War Veterans Association, to honor all who fought in the three-year conflict that killed over five million.

For veteran Scott Defebaugh, 98, commemorating the sacrifices his fellow soldiers made is part of why he gets up in the morning.

“We don’t forget,” he said. “One of the reasons I’m still active is so we won’t forget those we left behind as much as those we lost, and all the damage that was done.”

The Korean War began June 25, 1950, after a force of over 75,000 communist North Korean soldiers marched into South Korea, which was then the Republic of Korea. American troops were deployed to stop the invasion soon after.

Since the war ended in 1953, the U.S. Department of Defense estimates nearly 7,500 Americans are still missing in action. On Saturday, decadent wreaths were presented in front of the Korean War Monument as a tribute to them.

For many, the war, its end, and everything that came after also symbolizes a union between two communities.

The son of a man who fled Korea at the start of the war, Honorary Consulate of the Republic of Korea Michael Song said he can’t help but become emotional when thinking of the sacrifices veterans, as well as people like his father, made as a result of the war.

“I wouldn’t be here without these guys,” Song said, gesturing at Defebaugh and other veterans next to him. “These things are very emotional to me just because this kind of encompasses who I am and why I’m here.”

In recognition of the war, and the 68th anniversary of its end, El Paso County Commissioner Longinos Gonzalez, Jr. read a proclamation from the county board. Thomason read a proclamation on behalf of the Colorado Springs City Council President Tom Strand, who urged citizens to seek out veterans from the war and thank them for their service.

Triumphant music, played by a band with the Oklahoma National Guard, also presided over the event, while colors were presented by Widefield High School’s Junior Reserve Officers’ Training Corps.

The Colorado Springs-based Dutch Nelson Chapter, started in 1988, was one of the first organizations in the state to host a reunion for Korean War veterans, and was responsible for the 1996 conscription of the monument that hosted Saturday’s commemoration.

The chapter’s president, Jim McGibney, said on Saturday that those who served in the war accomplished something he couldn’t fully thank them for.

“It’s easy for me to say ‘thank you for your service,’” McGibney said. “But what you accomplished was the same thing all the troops did. You gave hope to a nation that really had no reason to hope.”