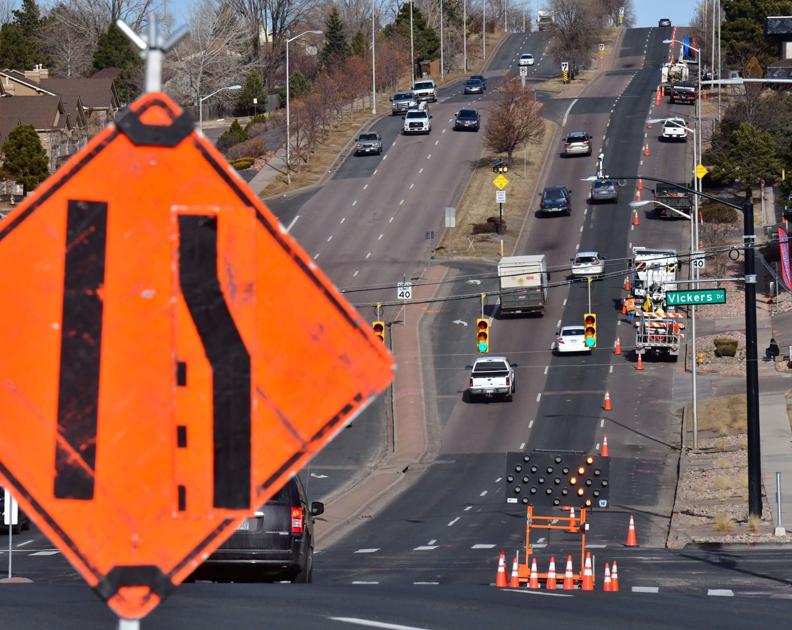 But it’s a problem that cannot be solved by simply building wider roads, in part because that’s not a feasible option in most of the city, said Tim Roberts, principal transportation planner for the city.

For Councilwoman Jill Gaebler, part of the answer lies in the city’s recently approved comprehensive plan that encourages bringing more affordable housing into the core of the Colorado Springs, which she said would help eliminate long commutes. Currently, many of the new apartment complexes are going up on the urban edges where developers don’t need to fight existing neighborhoods or redevelop infrastructure, she said.

“We have to build more multifamily housing and lower-cost housing in our city everywhere,” Gaebler said.

More traditional neighborhoods built on grid patterns within walking distance of shops and schools would also naturally help cut down on congestion by providing more routes in and out of neighborhoods and allow residents to safely walk or cycle to destinations, she said.

The survey that identified congestion as the number one problem in residents’ minds was completed for the city’s new transportation plan, ConnectCOS, a document intended to build on the recently finished comprehensive plan and promote safety for drivers, pedestrians, cyclists and all other modes of transportation, Roberts said.

The updated transportation plan is coming together at a time when travel is getting more deadly in the Colorado Springs. During 2020, 50 people died in traffic crashes. Of those, 15 involved motorcycles, 12 were pedestrian fatalities, and three crashes involved bicycles, according to Colorado Springs police. The previous record was 48 traffic deaths in 2018, the Gazette previously reported.

City officials could not explain why 2020 was more deadly, said Todd Frisbie, engineering manager for traffic operations. But the city staff is breaking down safety and traffic crashes by region and plans to present those trends at an upcoming meeting, he said.

Transportation needs are growing and changing in Colorado Springs, and many factors play into why traffic deaths are increasing, city spokeswoman Kim Melchor said.

“We are trying to work to create safer travel, more efficient travel,” she said.

Ultimately the plan will identify specific projects to improve the transportation system, Roberts said. It is expected to be finalized early in 2022.

The new survey did not identify the public’s second top frustration but instead broke down problems by city sector.

Residents identified the lack of infrastructure to serve cyclists and pedestrians as a key problem in six of the 12 sectors studied. Road maintenance and better east-west connections were also cited as priority improvement areas in multiple sectors, the survey found.

“We have the ability to provide transportation options for people who don’t want to be part of the congestion. … There is just a fair amount of reluctance to make that happen,” he said.

City plans in general support bicycling and walkability at a high level, but problems have arisen with implementation, White said. For example, he cited the city’s support for a corridor approach to bicycling infrastructure rather than a connected network that helps residents get to destinations.

“That’s a fundamental failing of the city planning process,”  he said.

City officials responded to his critique by saying, priority bike corridors identified in the 2018 Bike Master Plan will be incorporated into the new transportation plan.

“This not only builds upon the priority bike corridors, but will interconnect them with several transportation corridors,” Roberts said.

City officials expect to share an evaluation of the transportation system and full results of the survey from 5:30 p.m. to 7 p.m. Thursday during a virtual meeting. Pre-register at bit.ly/ConnectCOSRegistration