Colorado Springs Shooting Is Really an Act of Domestic Violence 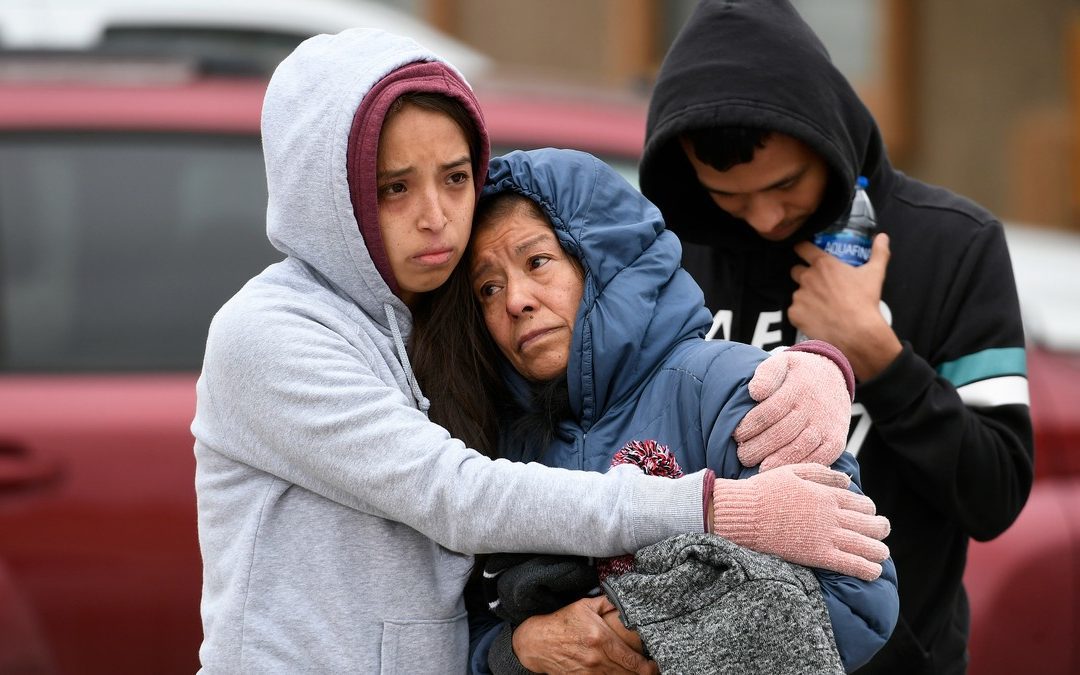 Want the best of VICE News straight to your inbox? Sign up here.

When a man walked into a birthday party full of family and friends in Colorado Springs, Colorado, this weekend and opened fire, he killed seven people, including himself and his girlfriend, according to police.

While the , the shooting so far appears to be one more link in the chain between domestic violence and mass shootings.

Mass shootings are often portrayed as acts of random violence, where a man—it’s usually a man—opens fire in a public space and kills several strangers. But study after study has uncovered a common thread between mass shootings: The men who commit them often have a history of domestic violence and tend to target a partner or family member.

None of the children at the party, which took place at a mobile home park, were hurt. All of the victims were members of the same extended family, . They’d spent the party watching a boxing match and eating cakes shaped like piñatas. The 911 call didn’t come until after midnight. The gunman’s name still hasn’t been released.

“It’s just crazy, it’s not what we expected on Mother’s Day,” the partygoer, Freddy Marquez, said. “I’m at a loss for words.”

In at least 54 percent of all mass shootings between 2008 and 2019, the gunman shot a current or former partner or family member, . (Everytown defines mass shootings as incidents where four or more people are shot and killed, excluding the perpetrator, as does the Gun Violence Archive.) The gunman had a known history of domestic abuse in at least 61 mass shootings.

Although no children were killed in the Colorado Springs shooting, they’re particularly at-risk in domestic violence-linked mass shootings. Seventy-two percent of the 309 children killed in mass shootings over the last decade died in such a shooting, Everytown found.

“This happens, and it happens with alarming regularity. We often don’t even hear about it because in this country now it’s so common,” said Liza Gold, president of American Academy of Psychiatry and the Law, who has written about the link between guns, domestic violence, and mass shootings. “It’s only the most sensational ones that we hear about. There’s nothing very sensational about a guy who kills his wife or maims his wife. It’s very distressing.”

Like mass shootings, domestic abuse in general is deeply gendered: Nearly half of all women murdered in the U.S. are killed by their intimate partners, (which was, for almost a quarter-century, banned from researching gun violence).

Beyond the threat of violence they already faced, the coronavirus pandemic has engendered a potentially lethal combo for American women. Over the last year, as people huddled indoors to wait out COVID, . At the same time, staying indoors is. By April 2020, calls to the National Domestic Violence Hotline had increased by 15 percent.

“This happens, and it happens with alarming regularity. We often don’t even hear about it because in this country now it’s so common.”

The presence of guns alone can make domestic violence more deadly. Firearms are already used in more than half of all domestic violence homicides, according to a 2020 study published in the Journal of Academy of Psychiatry and the Law. That same study found that, in domestic violence situations, guns were associated with a 70 percent increase in the chance that there would be more than one victim.

who work with survivors of gender-based violence, such as shelter employees, about half said that “abusers threatening to shoot survivors has become a bigger problem since the start of the pandemic.”

“I am very concerned that we’re just beginning to see the tip of the iceberg about the fallout—fallout in terms of violence of all kinds—related to the pandemic,” Gold said. “People have lost their jobs. They’re unemployed. There are more guns around even now than there were a year ago. People have been under much, much more stress. And there are a lot of very angry people.”

Federal law does block anyone with a final domestic violence restraining order from having firearms. (A final restraining order arises at the end of a domestic violence case, meaning that there could be a wide swath of time where a suspected abuser can still get guns—and women who have recently left their partners .) As of January 2021, 19 states and Washington, D.C. have enacted laws that let people file petitions to get guns out of the hands of people who may be a serious risk to themselves or others.

But without solid enforcement, domestic abusers can slip through the cracks. After a gunman shot and killed 26 people in a church in Sutherland Springs, Texas in 2017——it emerged that the Air Force had failed to report the man’s conviction for assaulting his previous wife and stepson, . That failure led him to be able to purchase the guns that he used to commit the massacre.

“The connection between domestic violence and gun violence is undeniable and made all the more deadly because of this country’s extraordinarily lax gun laws,” Shannon Watts, founder of Moms Demand Action, told VICE News in an email. “From closing the dating partner and background check loopholes to enacting red flag laws, we need federal action to protect women and end this gun violence epidemic that kills 100 people every day and wounds hundreds more.”

There’s been nearly 200 mass shootings so far in 2021, . There was one , another . Colorado has already seen a mass shooting this year; just left 10 people dead.