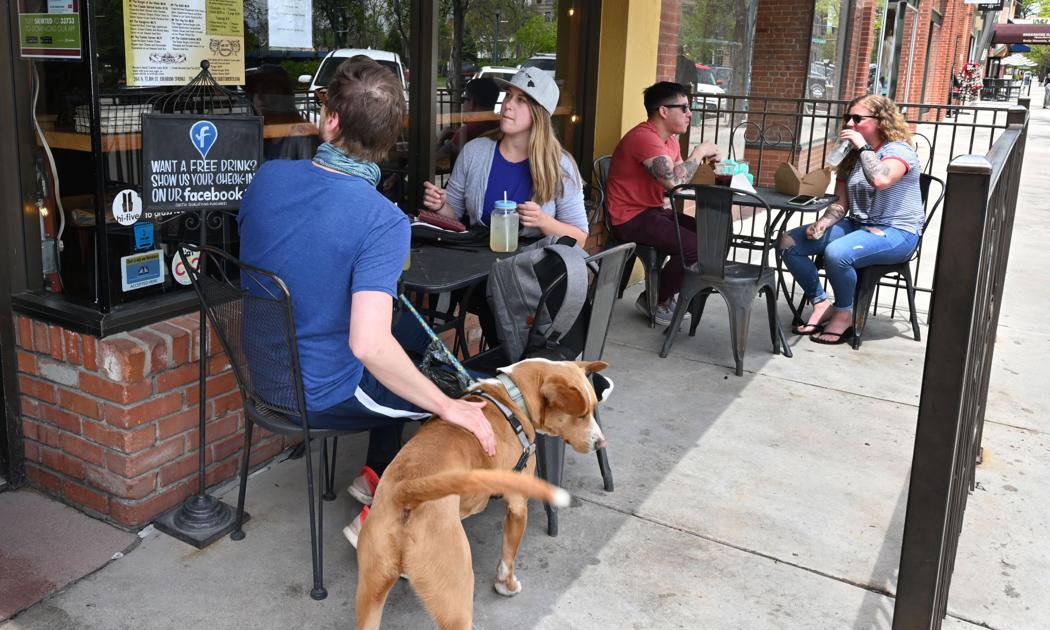 With a generous burrito on his plate, Duffy Parker settled in for a treat Sunday — the chance to share a meal with friends at a favorite downtown Colorado Springs coffee shop.

“The social aspect is a void, and this fills it,” Parker said at The Perk Downtown, 14 S. Tejon St., which reopened Sunday to socially distanced diners seeking a taste of normalcy. “I’m a little sick and tired of mac and cheese day after day.”

Restaurants across the city wasted no time reopening their dining rooms on Sunday, the morning after El Paso County announced it had been granted a waiver, or variance, from a statewide prohibition on in-person dining. The prohibition went into effect March 16, as part of wide-ranging measures ordered by Gov. Jared Polis to control the spread of the novel coronavirus.

Douglas, Teller and Fremont counties were cleared to reopen in-person dining in recent days, provided they follow the same restrictions that apply in El Paso County, including limiting dining rooms to 50% of their normal capacities.

Tables are limited to 10 diners — all from the same household or “consistent social group” — and restaurants are encouraged to collect phone numbers from at least one adult per table and keep them for at least 21 days.

Employees who work within 6 feet of each other or come into contact with customers must wear masks. The variance does not require patrons to wear face coverings.

The relaxed rules revived Tejon Street downtown, where an up-and-coming dining corridor had gone all but dark over recent weeks, while retail stores were temporarily closed and restaurants and cafes limited to takeout only.

“It’s been great,” said Cady Blaine of Denver from a table outside the Skirted Heifer, 204 N. Tejon St., which had tables set up along the sidewalk and a small crowd inside waiting to place their orders. “I’ve definitely been going a little stir crazy.”

The state informed the county of the waiver “late Saturday night,” and the county made its announcement after 10 p.m., leaving some restaurants unable to prepare.

“We’re waiting until we can do it right,“ said Crystal Kendall, the event coordinator at Phantom Canyon Brewing Co., 2 E. Pikes Peak Ave., which will continue to offer takeout. “We just want to make sure we have the proper guidelines and precautions in place.”

At East Coast Restaurant and Deli, 24 S. Tejon St., takeout only will still the rule of the day. Patrons have been clamoring to return for weeks, said owner Laura Schaller, but she’s reluctant until they have a necessary precaution: sneeze guards.

Her husband has been searching the city for plastic barriers to install at the front counter, with no luck. “Everybody’s sold out,” Schaller said.

Paper menus are also on order, and the restaurant is looking for new help after learning that at least three employees have declined to return.

“We’re hoping for later this week,” Schaller said. “We want to make sure we’re compliant.”

The relaxed restrictions for restaurants in El Paso County come roughly a month after Colorado lifted a statewide stay-at-home order and entered a new phase called “safer at home.” Retail stores were permitted to resume in-store shopping days later, in early May.

Whether restaurants get enough traffic to make up for lost time and money remains to be seen.

In the more than two months since restaurants were cut off from allowing in-person dining, some eateries in Colorado Springs were forced to close their doors permanently, including Western Omelette on the city’s near west side, which shuttered in late March after 28 years.

Others said the future would depend on whether diners return to old habits once restrictions were eased.

“Our Facebook just blew up this morning, with calls for reservations, and checking to see exactly what we were doing,” said Cooper Davidson, the bar manager.

After the March closure order, the popular downtown pub pared its staff down to managers only, then brought back 28 employees about three weeks ago. All employees will be wearing face masks, enhanced cleaning measures are in effect, and toilets will be sanitized hourly.

After two months of reduced operations, they didn’t want to leave anything to chance, Davidson said.

“We’re pretty prepared,” Davidson said. “We were thinking it was going to be Tuesday or Wednesday, but when Teller County got the call, we basically got everything ready.”