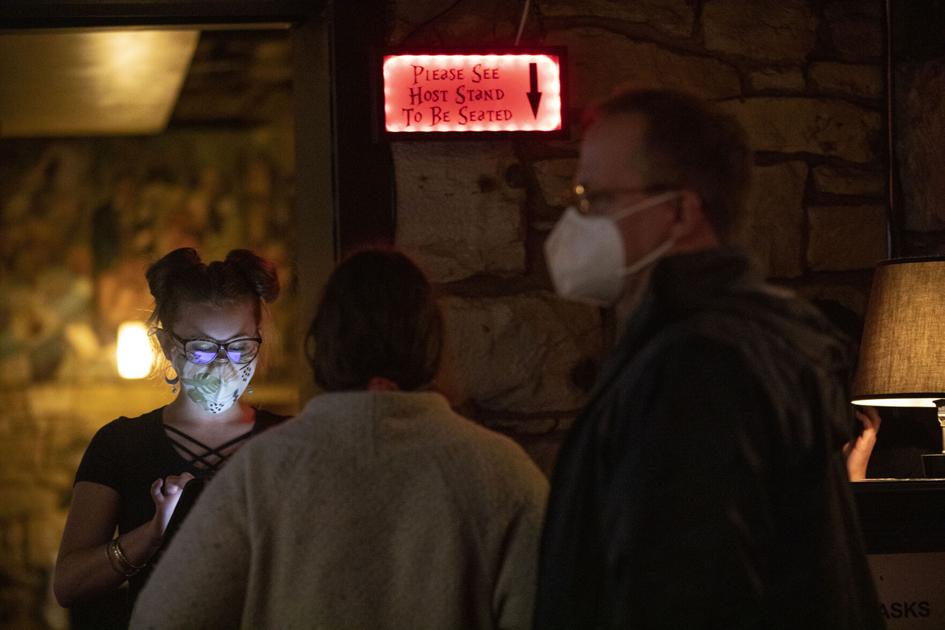 But conditions got even tougher Friday as new restrictions designed to slow the spread of the coronavirus took effect in El Paso County.

Restaurants’ already reduced indoor seating capacities now have been cut in half, from 50% to 25%. Some restaurants say the tighter measures aren’t sustainable and will force them to switch to takeout and delivery, instead of sit-down dining. Others are counting on continuing to make do with outdoor seating, with some restaurants trying to innovate to make wintertime outdoor dining palatable .

Data from the Downtown Partnership advocacy group show gross sales for downtown bars and restaurants plunged 80% in April when the state was under a stay-at-home order compared with the same month last year. When the order was lifted. but a limit placed on indoor capacities, those numbers steadily improved through August, when year-over-year sales were down only 17%.

But stricter restrictions on seating limits mean restaurants could see another big drop in sales.

“It’s been really hard, honestly, especially at half capacity — half the business is there,” said Joseph Campana, who owns nine eateries downtown including Bonny & Read, The Rabbit Hole and SuperNova.

“I think the problem that we’re having is that people aren’t listening to the rules,” Campana said.

El Paso County’s rate of positive COVID-19 cases among those tested was 13% when the restrictions kicked in Friday — weeks after the county passed the 5% threshold recommended by the World Health Organization for reopening.

But now that restrictions are tighter, Campana plans to temporarily close all but one of his locations as of Monday.

Campana said he planned to stay open through the weekend because many customers made reservations and a bulk of the food he ordered needed to be sold.

“For me, it’s hard when I order $10,000 worth of food on Wednesday, and they’re basically dropping me on Friday,” he said.

A temporary shutdown doesn’t eliminate all of Campana’s costs, however. He still has to pay $80,000 in rent each month for his restaurants, he said.

Campana also has his employees to worry about. He said he would have to put them on unemployment for what he expects to be at least a monthlong closure until he can return to 50% seating capacity .

“It seems pointless to open up in the middle of the pandemic and in the wintertime,” Campana said.

Some restaurants are turning to takeout and delivery to try and offset the seating restrictions, but Campana says that model doesn’t suit his businesses. His gourmet Bonny & Read seafood restaurant, for example, is a traditional sit-down experience.

But for other, more casual restaurants, takeout is the answer.

“We held on pretty good during the total shutdown, and through all of this, because people know that they can come in, grab it and take it home,” said Suzette Megyeri. She and her husband, Kevin, co-own Bambino’s Urban Pizzeria and the Skirted Heifer hamburger restaurant in downtown.

While Megyeri is hopeful about weathering the winter months by relying on takeout, she’s still worried about how long the pandemic’s uncertainties will last.

“I’m so nervous,” Megyeri said. “My husband and I are preparing for retirement. And this might give us a little bit of a delay in that plan.”

Megyeri is optimistic about making it into next year, though sales haven’t fully rebounded.

“We’ve definitely expected a sharp sales decrease with … the infectious rate increasing so dramatically,” Travins said. “And then, of course, the temperature dropping dramatically.”

“The direction we’ve gone is to buy as many patio heaters as we can source from Home Depot, Lowe’s, Ace Hardware,” Travins said. “I think we’ve exhausted all the local supplies.”

But heaters aren’t cheap. Travins says their online cost tripled during the pandemic. That’s why he applied to the Downtown Partnership’s grant program to help offset the cost.

Travins considered applying, but wasn’t sure what the upcoming months would look like.

“It’s difficult for me to sit here and say, ‘We’re going to have this plan,’” Travins said.

“It may take a week, a couple of weeks or a month for us to decide if we want to build any structures because, inevitably, those are going to be expensive,” he said.

The Downtown Partnership also is trying to work with businesses such as Travins’ to provide fleece blankets to restaurants offering outdoor dining.

“What we’re trying to do now, and I think really the focus of our restaurants and bars downtown, is on creating as welcoming and as comfortable and positive experience for outdoor dining as we can through the winter months,” said Alex Armani-Munn, the Downtown Partnership’s economic development specialist .

While restaurants have some avenues for help with winter-related grants, Armani-Munn said the next few months are going to be tough.

“I sort of equate this to a natural disaster for our small businesses,” Armani-Munn said. “Just something that could be potentially catastrophic. I’m not saying that it necessarily will be. But depending on how long these restrictions go on, it could be severe.”