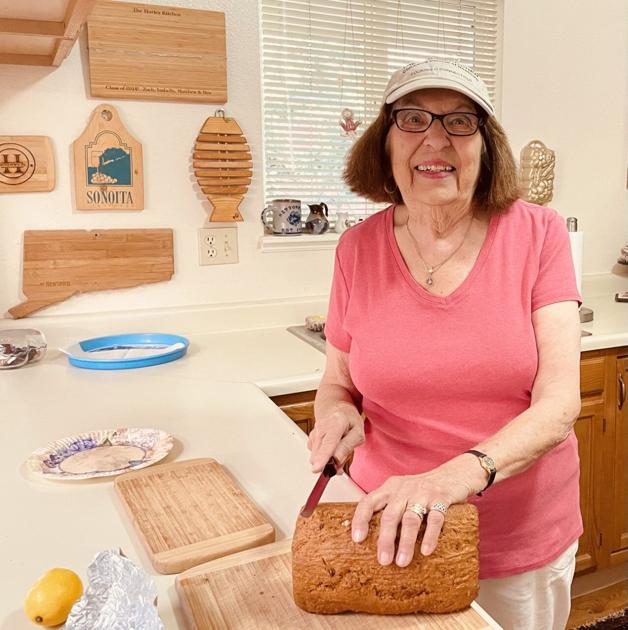 Now, many years later, Hurley is a Colorado Springs resident, with her own cookbook published and upcoming cooking classes on her teaching roster.

Hurley moved here in 2016, settling at the Village at Skyline assisted living, where she has a one-bedroom home with a full kitchen.

“I have three grown daughters, and one lives here with her husband and family,” she said. “When my husband passed away in 2015, the three girls had a meeting about ‘what to do with mom.’ Since Mike (her husband) and I visited Colorado Springs often and loved it here, I decided this was the place for me.”

Hurley also had a friend who for years had been nudging her to write a cookbook. But she never had the time — until stay-at-home orders started in Colorado in March 2020. Her friend reminded her, “Now is the time to write your cookbook.”

Hurley took her advice during the period of isolation and did more cooking than ever.

“I couldn’t go anywhere, couldn’t see anybody,” she said. “I began going through the boxes of my cooking school materials and realized, I can do this. It became my pandemic project.”

“The Hurley Kitchen Cookbook: Food for All Seasons” was published in November.

“You have no idea how happy I was when the first books arrived,” she said. “My three daughters were excited for it too.”

In addition to her own recipes curated from years of teaching cooking classes, Hurleyo included recipes from extended family, friends and even some former students, all of whom had been invited to contribute.

“Everyone I asked sent recipes,” she said.

The book has more than 200 recipes, many of them bearing someone’s first name. All have been tested for high altitude. Of course, most of the recipes are by Hurley, including her famous banana nut bread.

“I make it to this day every time I get a new neighbor here,” she said. “Everyone knows me here for that. I bake it and welcome them to the community.”

At the Village, she contributes recipes on a closed-circuit television station during a segment called “Recipe of the Week.”

“They are all simple recipes that can be prepared without an oven,” she said. “Not all the residents have a range in their apartments. They are retired and many don’t want to cook anymore. But every so often they are interested in making something for the holidays or special occasion that’s easy.”

She’ll also be offering cooking demonstrations for Village residents called “Lunch and Learn,” in the dining room at the Village at Skyline. The first, on soup and bread, is scheduled for Sept. 29.

To purchase a copy of “The Hurley Kitchen Cookbook: Food for All Seasons,” email Hurley at hurleykitchen@gmail.com. The price is $15 plus $3.16 for postage.