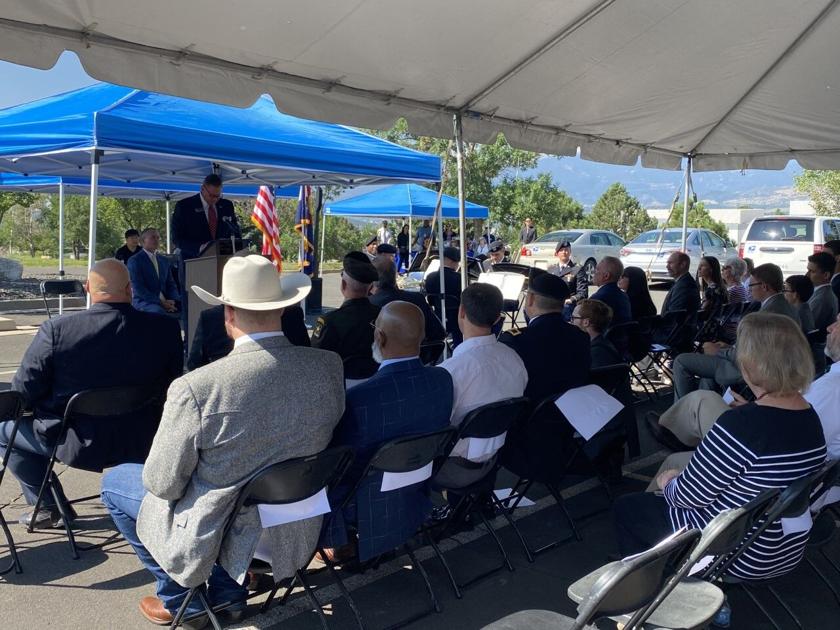 Colleagues, family and friends of fallen Fort Carson Capt. Dale Goetz, an Army chaplain, gathered for a dedication ceremony Friday to honor him as the U.S. Post Office branch in Briargate was renamed in his memory.

A brass band played and an American flag fluttered in the wind as speakers took to the podium to commemorate Goetz’s life and service.

“Dale was doing on that very fateful day what he was called to do, what we would expect any chaplain to do — to be there with his soldiers,” Maj. Gen. Thomas Solhjem, Army chief of chaplains, said during the ceremony.

Goetz, chaplain with Fort Carson’s 1st Brigade Combat Team, died on Aug. 30, 2010. He was the first chaplain killed in action since 1970 during the Vietnam War. He left behind his wife and three children the day a roadside bomb exploded in the Afghan region of Kandahar, killing him and four soldiers.

Joshuwa Clare, the chaplain’s assistant, accompanied Goetz that day to minister to soldiers in the field.

Clare said Goetz did everything he could for his soldiers up until the very last second during a supply mission where Goetz was counseling soldiers.

“Goetz loved his family and he loved his soldiers,” Clare said. “He truly wanted the best for them, which meant sharing the love of God with them, and that was his mission.”

Clare said he wished he could have protected Goetz and his death still weighs on him.

“There’s guilt that I came home to my wife and that he didn’t come to his wife,” Clare said.

Goetz’s wife, Christy Goetz Bixby, was living in Okinawa, Japan, with their 13-month-old son and two older children when he died.

“It’s hard to believe I’m standing here,” she said, a plaque dedicated to her husband displayed a few feet behind her. “I feel like I’m in a dream.”

Christy Bixby eventually remarried another man, a widower, John Bixby, and they shared a blended family of 10 children together. Christy hopes her children carry on their father’s legacy.

“Their daddy was a wonderful man, a wonderful father, a wonderful leader, soldier, chaplain,” Christy said. “I would hope that they would desire to be like him as best they can, with the Lord’s help.”

The post office’s dedication was initiated by Colorado Springs Republican U.S. Rep. Doug Lamborn, who introduced a bill calling for the dedication approved by the House on Sept. 30, 2020.

“We’re remembering a chaplain who was serving God as well as the spiritual needs of our men and women in uniform,” Lamborn said.