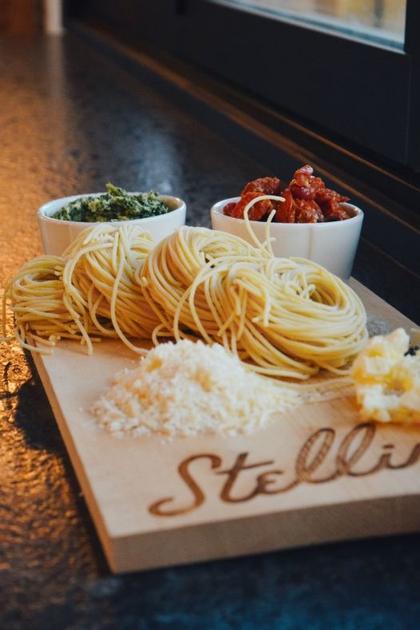 With all the bad news for restaurants of lost revenues and wages for employees and owners, here’s a ray of sunlight and good cheer. Gregg Braha and Gina Solazzi are bringing back a smaller version of their much-loved Pasta di Solazzi, which they opened in 1982 and closed in 2001.

At the first location in the Woodmen Shopping Center at Academy Boulevard and Woodmen Road, Solazzi became the queen of homemade pasta and fabulous sauces. The deli brimmed with imported cheese and meats from Italy. With their customer base growing, the husband-and-wife team leaped for a larger space on Centennial Boulevard, near Marigold’s Café and Bakery. They expanded their menu, increased deli options and added seated dining. They even hired a chef from Italy. It was a sad day when they made the decision to close Pasta di Solazi to pursue other careers.

Solazzi and Braha have worked out an arrangement with Kathy Dreiling and partner Michelle Talarico of the Picnic Basket Catering Co., 1701 S. 8th St., to use kitchen space to make pasta, sauces and a few specialty items to sell online for takeout. One specialty dish Solazzi has brought back is her Cheese Torte ($29.95), which was very popular during the holidays as an appetizer. It consists of provolone slices layered with basil and sun-dried tomato pestos, and garlic cream. She makes a limited amount of them and they sell out quickly.

TJ Curry, executive chef at Mood Tapas Bar and Bird Tree, along with the restaurant’s owners, Crystal and Michael Thompson, launched The Thank You Initiative in late November as dine-in was going to be curtailed again in restaurants.

“We are setting up a program to make meals for hospital workers during this upcoming closing of dining in,” he emailed. “Our goal is to make 200 meals three times a week for employees at hospitals to try to help support their fight through all of this.” As of Dec. 10, they had more than exceeded the number of meals going to UCHealth employees.

“It’s going well,” he said in an email. “We just finished up 900 meals delivered yesterday. We are also on schedule for 600 meals a week through the end of the year right now and hoping to be able to do more soon.”

He is getting support in the form of donated food from several food service distributors, including Ben E. Keith, Altamira Foods, and Sysco.

Pasta in a hurry

Will Merwin, chef at Stellina Pizza, 749 E. Willamette Ave., has been perfecting his fresh pasta recipe and techniques. He recently created the Pasta Meal Kit ($32), with ingredients to make pesto spaghetti for two with focaccia bread as a side. You can also add house-made spaghetti, rigatoni and macaroni to takeout orders. Single portion (7 ounces), $3.50; double portion (14 ounces), $7. No delivery fees in December. Details: 220-6406, stellinapizza.co.

Did you know Brother Luck, owner of Four by Brother Luck and Lucky Dumpling, has a monthly email newsletter? That’s where you learn about insider discounts with codes to get them, like 10% off all to-go orders through January at both of his eateries. He’s also ramping up his sold-out virtual cooking classes, adding more weekly. Visit fourbybrotherluck.com and click on contact to get signed up.

Here are a couple of places to order takeout for holiday meals:

Prices range from $19.99 to $69.99 depending on Family Meal or individual order. Visit facebook.com/BlackBearDiner.