Colorado Springs police: ‘You did it right’ to protesters 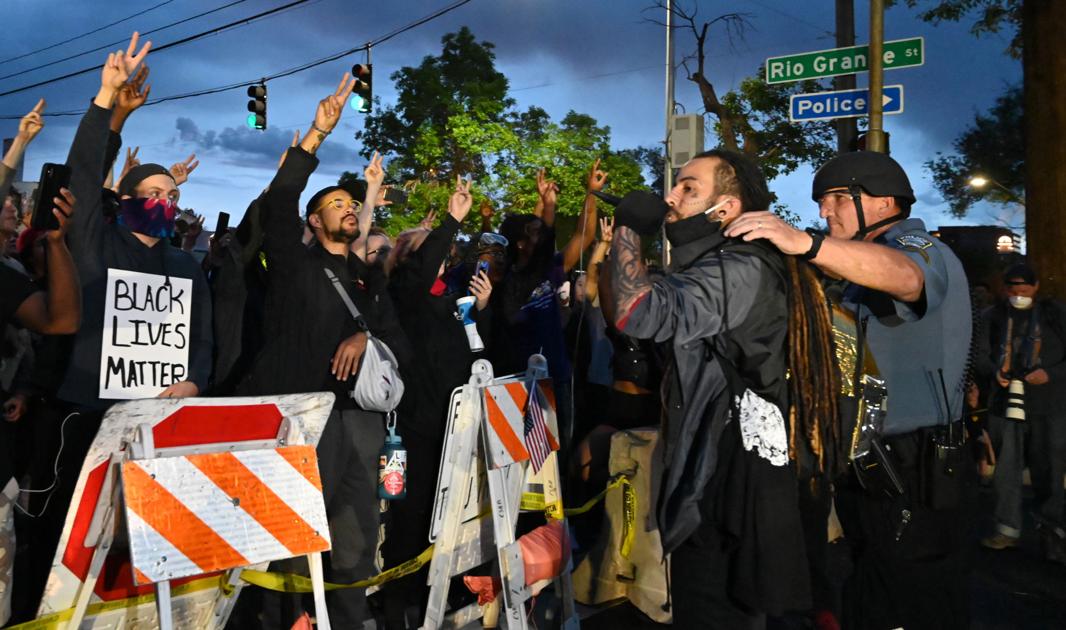 A microphone was given to Sgt. Olav Chaney who commended protesters. The crowd of about 100 held up two fingers, signaling the peace sign, and chanted “peaceful protest.”

Chaney said to the crowd that sometimes officers do the wrong thing, but they took an oath to always strive to do the right thing.

“You guys did it right,” Chaney said of the protesters, who only chanted and held signs during their rally as of 8:30 p.m. Monday.

Some protesters fired back that officers can’t be trusted and aren’t good cops.

“I hear you, I understand you. But let’s work together to make the right change,” Chaney said.

Protesters began moving towards the Police Operation Center in downtown Colorado Springs where they were met with taped-off streets at East Rio Grande Street and South Nevada Avenue. Nine officers stood in the middle of the road, holding shields.

The department’s actions come as violent clashes with police persist elsewhere around the country, including in Louisville where a man protester was killed after an officer fired into the crowd in response to gunshots.

“So we need to be out here with them. We need to be saying this is what we stand for as a police department, as a community. We are in this fight together,” Newton said.

Many protestors have crossed Nevada Ave in front of city hall. Still no police protests and everyone is being peaceful. @csgazette #GeorgeFloydProtests pic.twitter.com/vZfQ8PDQuz

A man is encouraging all peaceful acts tonight in #GeorgeFloydProtests in #coloradosprings they are shouting #PeacefulProtests @csgazette pic.twitter.com/QViAIzAqzQ

The officers joined more than 150 people, including young children, outside City Hall Monday morning. Several protesters held signs that read “White Silence = Violence,” and “No Justice, No Peace,” as they marched to the Pioneer’s Museum and back.

Protesters take a knee in front of several police officers in riot gear in downtown Colorado Springs. The crowd is now asking questions to officers about the dept’s policing policies. The protest remains peaceful and calm. pic.twitter.com/UO6vYzYboG

Correction: The protest will begin in front of City Hall at noon. https://t.co/kNIO3eimdO

Mayor John Suthers said in an interview the use of force against Floyd was inappropriate, but the city did not ask officers to strike a conciliatory tone with protesters by kneeling.

“It’s up to each individual officer how they want to interrelate with the protesters, as long as they doing their job,” he said.

Suthers said he supports how city police officers have handled the protests thus far, allowing demonstrators to march down city streets without a permit, but not tolerating threats to safety or property.

“When there is any danger to personal injury or property they have responded aggressively, in a nonlethal fashion,” Suthers  said.

Sunday night protesters tagged city hall and buildings along Tejon Street with graffiti and city crews have already moved it. Some taggers were issued a summons by police Sunday, but Suthers did not say how many.

The Colorado Springs Police Department does not yet have an estimate of the damage caused by protesters over the weekend, but it was “substantial” and included graffiti, broken police vehicle windows, as well as damage to public property, police spokeswoman Natashia Kerr said. The police arrested about 38 people Saturday and about nine people Sunday, she said.

Several drivers Monday honked in solidarity as protesters chanted “No Trump, no KKK, no racist USA,” and “Hands up, don’t shoot,” among other statements.

“We want to show a message to everybody in the world to know that we don’t always have to go with violence. We can fight with peace and with our words,” said Charles Johnson, one of the protest’s organizers.

More than 100 people are marching downtown Colorado Springs in protest of the killing of #GeorgeFloyd pic.twitter.com/YFbOUF5ePc

Floyd died May 25 while in police custody. Images from his arrest show an officer kneeling on Floyd’s neck. Reports show he told the officer, who has since been charged with 3rd degree murder, that he could not breathe.

Monday’s show of support by the officers at Colorado Springs City Hall signified a change in the community, Johnson said, noting it was important for them “to come together with a community of minorities and different races, standing together as one.”

Maggie Santos, a campus safety director for Colorado College, said she attended to represent the school’s students who would have protested if they were still on campus. She handed out masks to attendees to help protect them from COVID-19, the disease caused by the coronavirus that is still spreading around the state and country.

She said she was glad to see the officers with the protesters.

“It has to be this way,” said Santos, who is also a retired CSPD officer. “The police department isn’t above the community, it is from the community. We need to be together, we can’t be apart.”

Stephany Rose Spaulding urged the crowd to continue a dialogue about racial injustice.

The crowd marched down Nevada Avenue where they kneeled in front of 14 officers in riot gear outside the police headquarters, at 705 S. Nevada Ave. Police tape and concrete barricades prevented the crowd from going near the building.

Three officers stood closer to the crowd to answer questions, hand out business cards, shake hands with some of the demonstrators.

The crowd grew throughout the day, reaching a crowd of more than 250 people when it finished at City Hall at 4 p.m.

Organizers said another protest will begin tomorrow at noon in front of City Hall.