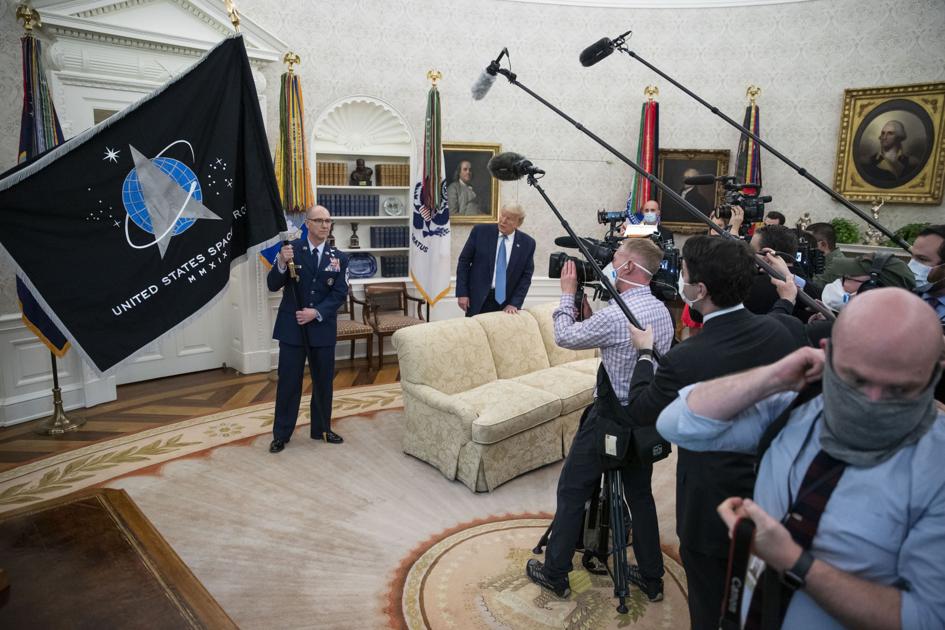 As U.S. Space Command settled in to its provisional home in Colorado Springs last week by issuing the first operational orders to prevent calamities in orbit, Colorado Springs leaders were frantically at work to keep the headquarters and its 1,400 troops and civilian workers here permanently.

The city received some breathing room this month when the Pentagon decided to make it the home of Space Command for at least the next six years. But in the same decision, the Pentagon opened a nationwide competition that will see cities from nearly every corner of the nation work to woo the command away.

While the temporary reassurance was nice, local politicians were worried about the risk ahead.

“We’re working diligently to do all we can to make sure the president and the Pentagon understand that we want it here,” said El Paso County Commissioner Mark Waller.

From making sure there’s proper pavement for troops commuting to the headquarters to conjuring up plans to get the spouses of those troops adequate employment, leaders here from local, state and federal government were girding for battle.

With the national economy suffering the impacts of coronavirus and millions out of work, the command is a sought-after prize that will draw a pack of suitors.

Colorado Springs City Councilman Wayne Williams said the allure of getting the command comes not just from its troops, but from the defense contractors and space industries that will congregate wherever it calls home.

“At the command level we’re dealing with economic impact not just from direct employees but from related industries,” he explained.

The military’s space efforts have been headquartered in Colorado Springs since the dawn of the Space Age. An earlier version of U.S. Space Command was headquartered at Peterson Air Force Base until shortly after 9/11 when it was shut down in a Pentagon reorganization that pivoted the military away from the Cold War in the face of terrorist threats.

The command was reconstructed by the Trump administration. Leaders from the president down have said looming threats in orbit require a headquarters to plan for the possibility of warfare in space while managing the military’s fleet of satellites, the world’s largest.

But Colorado Springs didn’t get credit for time served as the caretaker of military space. Recreating the command triggered an automatic Pentagon process to assess alternatives for where it should be housed.

“It reminds the community that if you really want this, you will really need to work to make our proposal the best of any of the contenders,” said retired Air Force Gen. Gene Renuart, who headed U.S. Northern Command and the North American Aerospace Defense Command before hanging up his stars in 2010.

The Pentagon laid out some conditions for the city that will get the command on a permanent basis. The recipient will be among the nation’s 150 largest metropolitan areas, and must sit within 25 miles of a military base.

While Colorado Springs meets those criteria, so do cities from Honolulu to Washington, D.C.

Another factor could push many communities off the list: The requirement that they score higher than a 50 in the AARP livability index.

Reggie Ash, who heads defense programs for the Colorado Springs Chamber of Commerce & EDC, said the Pikes Peak region really stands out in more esoteric criteria the military has set for the command’s new home, including proximity to other space missions and having an infrastructure that can support it.

“In all of those criteria, I feel really good,” he said.

With five military bases in town and the bulk of the troops who make up the newly created Space Force, inaugurated in December, Colorado Springs Republican U.S. Rep. Doug Lamborn said no other community should really have chance at landing Space Command.

“I see people making stabs at it, but no one can make the case we can make,” he said.

That’s been the line of thinking of many in the Pikes Peak region since the re-establishment of the command was announced in 2018. But that didn’t stop what became a frenzied competition for it that drew personal attention from President Donald Trump.

Even a Pentagon announcement last year that named Colorado, California and Alabama as finalists to house the command collapsed under political pressure from other would-be homes, including Florida.

A decision was supposed to be reached last summer, but was repeatedly delayed. On a campaign stop in Colorado Springs in February, Trump said he’d be making the final call.

“You are being very strongly considered for the Space Command, very strongly,” Trump told a crowd of supporters who packed the Broadmoor World Arena.

Now, along with declaring Colorado Springs the provisional home, the Pentagon has said its leaders will make the decision on a preferred location sometime in early 2021, after the clamor of the 2020 presidential election has died down.

“I think it is an important first step, but we absolutely can’t take anything for granted,” he said.

Gardner, Waller, Williams and Lamborn are part of a coalition of politicians and business leaders who are working to ensure Colorado Springs remains the front-runner.

Gardner is working in the state Senate to secure legislation that would allow easier transfer of professional licenses and certifications for military spouses who are drawn here by the command and other military activities.

He’s also working angles from shoring up schools near the bases to guaranteeing military families who transfer in get in-state tuition discounts at public colleges and universities.

In City Hall, Williams is working to ensure the military gets the local services it needs. The City Council also sits as the board overseeing Colorado Springs Utilities, which would deliver power and water to the command.

Waller is looking after some of that infrastructure in the form of roads and highways to the bases and is also working to make sure the Pikes Peak Workforce Center can connect military families to local jobs.

Lamborn, who serves as the ranking Republican on the House Armed Services Committee’s panel that oversees readiness and military construction work, said he’s trying to use the power he’s amassed during 14 years in office to steer the command here. He’s already worked to get a $148 million space operations center that’s set to be under construction later this year at Schriever Air Force Base.

He said he can use that same influence to block projects for likely competitors who could seek new military construction to lure away the command.

“I can be on the offense or the defense,” Lamborn said. “If I see a proposal from a (competing city) I can go after that tooth and nail and do my best to see that never sees the light of day.”

But all the plans that are underway could come up empty if Colorado Springs can’t come up with an effective way to show them off at the Pentagon.

And Renuart said the city will need to show the Pentagon more than some new pavement and a few policies that are military friendly.

Colorado Springs, the general said, must make the same kind of long-term commitment to the command that it seeks from the Pentagon to keep the command here.

He said programs to build a nation-leading space workforce and a plan to house all those space troops in homes they can afford must be part of the city’s offer.

“We can commit from a state perspective to the investment it will take to keep this command,” he said