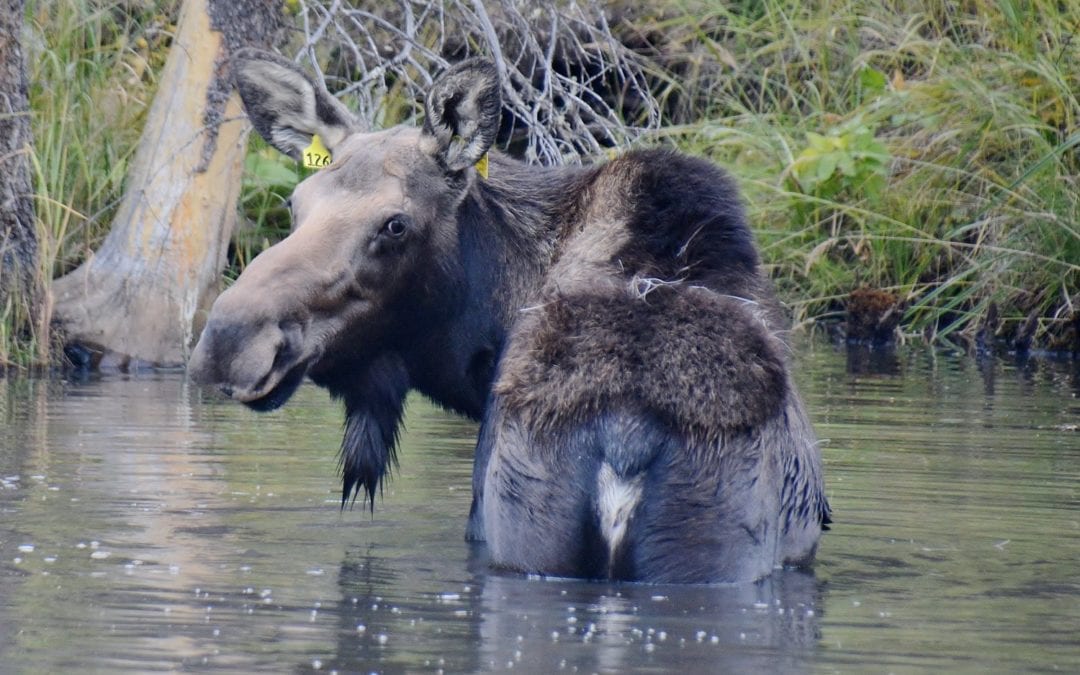 We can only assume it was a traumatic day for one unsuspecting moose.

The moose in question, a 2-year-old city girl, started her Friday like any other day: Waking up, brushing the sleep out of her eyes and running into traffic on the way to work. And by this, we mean crossing six lanes of rush hour traffic in Colorado Springs. What can we say? She had places to be and people to see.

Our leading lady made her way over to Palmer Park, a popular one for people and pets (she must have heard that Elevation Outdoors Magazine named it the “Best Urban Park in its Best of Rockies” in 2017). She meandered about the heavy brush, taking in the beautiful scenery and enjoying some nice fall air.

She was completely unaware that Colorado Parks and Wildlife officers were following closely behind, armed with a tranquilizer gun and the smartphones they used to exhaustively document her adventure via photos, videos and tweets.

After unknowingly — yet still successfully — evading capture for two hours, our moose’s luck finally ran out. Last thing she remembered, something pricked her body and her eyelids grew heavy. She’d been tranquilized, or “tranqued,” as the kids like to call it.

While she dozed, officers quickly moisturized her eyes. Even they recognize the benefits of a good skincare regimen.

“When bears and moose and other animals are tranquilized, they can’t blink and self-moisturize their eyes,” CPW wrote on Twitter. “To prevent them from drying out while sedated, we rub a moisturizer in their eyes.”

After 2 hours tracking, @COParksWildlife Officers Aaron Berscheid and Corey Adler located the moose, darted it with tranquilizer & watched it fall asleep. Then they quickly applied eye moisturizer, hobbled its legs, hooded it and gathered 10 others to carry it to a trailer. (3/6) pic.twitter.com/ot1gjU0Zd9

The officers — 10 of them! — picked up our passed-out moose and carried her away to a trailer, where they gave her an identification tag. Then, a terrestrial biologist gave our moose medication to reverse the effects of the tranquilizer.

Our heroine awoke in an unfamiliar place with an unfamiliar earring. She could see her moving prison was making its way toward the mountains west of the Springs. Suddenly, it stopped. She looked around and realized she was in a marsh with a pond nearby.

At last, the bars of her cage were opened and our moose ran straight toward the pond. After all of the day’s activities, she could really go for a bath. (Editor’s note: Our leading lady got to enjoy a lovely bath at the end of her saga, this poor bull moose was forced to take a shower instead.)

She looked around at her new surroundings. There may not have been any bustling cars around her, but there were plenty of willows to munch on. Hey, who knows? This might just make a nice new home.

Before @COParksWildlife staff left, the moose had taken a dip in the pond, climbed out and was munching willows and checking out its new home, a much more suitable habitat than in the center of #ColoradoSprings. #wildlife #conservation pic.twitter.com/uBJoG7dCuK