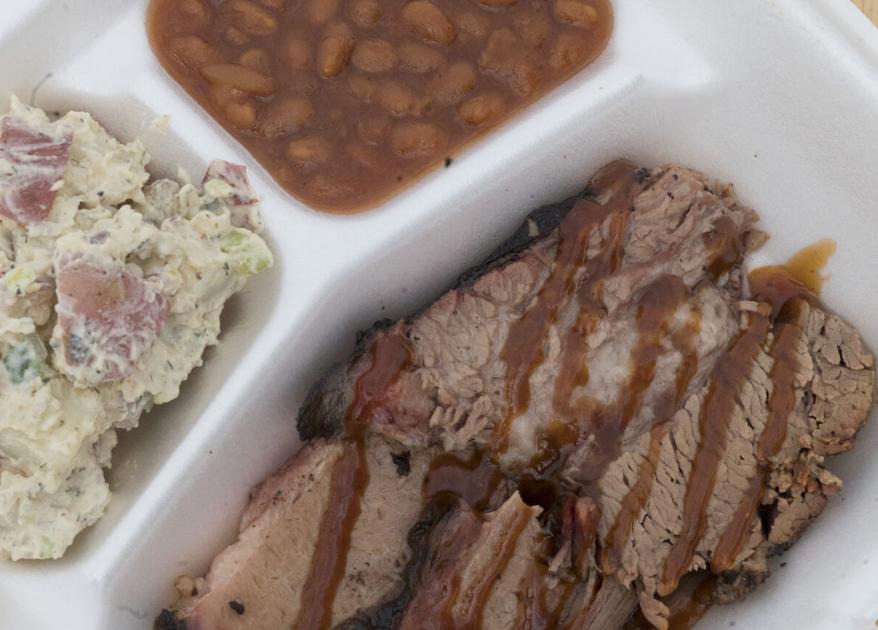 Memorial Day is often thought of as the unofficial kickoff to the season of barbecuing and smoking. For the rest of the summer, the smell of smoky foods will fill neighborhoods probably on a nightly basis.

This year, instead of just flipping the same old burgers, dogs or steaks, think about creating a different aroma with a slow-cooked brisket. For some tips on getting this job done, we turned to Michael Hudgins, owner of Gold Tooth Annie’s, a smoked meat mobile eatery, in Security, and Steven Raichlen, cookbook author and dean of BBQ U.

The goal, according to Hudgins, is landing a brisket that’s smoky, tender and moist. To accomplish a nice smoky flavor, “Buy a grill that you can use wood chips in,” he said. “Then soak them in water. When the water in the chips gets hot, they release steam that creates the smoke.”

When it comes to choosing between a wood- fueled smoker or pellets, he says he’s “a stick guy.”

“Regarding smokers, I am absolutely old school,” he said. “I have always used stick-smokers and firmly believe that good and consistent smoky flavor comes from using the real thing.”

He has a couple of commercial smokers with rotating shelves, which he stokes with oak logs that have been split, to keep the fire temperature steady. He restocks his oak supply every couple of weeks.

“Pellet smokers definitely have their place in the industry, but they are not for me at this time,” he said. “I grew up with a father who always smoked meat using wood logs.”

As for the meat, Hudgins buys dozens of choice beef briskets from Sam’s Club.

“They are usually 12 to 16 pounds,” Hudgins said. “There are two muscles in a whole brisket. The broader square end is called the flat and is a leaner section. The other end of the triangle is known as the point. It is more tender because it contains a bit more internal fat marbling. And, in addition to the tenderness that fat provides, it also adds flavor.”

Michael Hudgins, owner of Gold Tooth Annie’s, slices the beef brisket after taking it off of the grill.

He recommends patience when getting the wood going. That’s because it takes time to get the temperature in the smoking chamber to about 225 degrees, around an hour. Hudgins uses this time to make his spice mixture or prep other meats he may be cooking at the same time as the brisket.

When his fire is at the right temperature, he pats on the seasoning, making sure all surfaces are covered. He keeps his seasoning simple.

Raichlen agrees about simple rubs, saying, “Coarse sea salt, cracked black peppercorns, and a dusting of hot red pepper flakes for heat. I season the brisket with a heavy hand. I want a crust savory with salt and spice.”

A soon as Hudgins has patted on his seasoning, the brisket is placed in the smoker.

“I put the brisket right on the grill as soon as it’s seasoned,” he said. “Some like to let it rest in the fridge overnight or smear it with mustard. I like to keep the outside of the meat dry.”

When Hudgins is ready to cut the brisket, he checks a slice off the thinner point of the brisket for the winning qualities: moistness, tenderness and juiciness. Then he cuts the whole brisket into quarters, wraps them in foil and places them in a warming oven. When he prepares an order, he slices meat from both the flat and the point, so his customers can enjoy both lean and fattier meat.

What can mess up a smoked brisket?

“Cooking too hot, not managing the fire and letting the meat reach too high of an internal temperature,” Hudgins said.

In Raichlen’s blog titled “Beef Brisket Made Easy,” he recommends using grass-fed brisket from Wisconsin’s Strauss Brands. And go for a 12-pound “packer” with the point intact.

“This is a great size. It feeds 10 to 12 people with leftovers, and there’s enough fat in the point to keep the brisket moist —even during prolonged cooking,” Raichlen writes.

To keep the meat moist, Raichlen puts a pan of water in the smoker, and every hour he lightly sprays the brisket with white vinegar in a spray bottle. He wraps his brisket in pink unlined butcher paper to let it rest after cooking.

“The advantage of butcher paper over foil is that it breathes, holding the moistness in the meat, but without making the bark (crust) soggy,” he said.

Raichlen adds, the best way to judge a brisket’s doneness is by feel. Put on a pair of insulated food gloves and touch the brisket. Does it feel soft and jiggly? Can you worm your finger easily between the point and the flat? Is the meat so tender, you can push the handle of a wooden spoon through it without too much resistance? That’s what you’re looking for.

Now, to sauce or not to sauce?

“I like to eat brisket without sauce,” Hudgens said. “But I make sauce and always include it separately with orders. I believe if the brisket is smoked perfectly, I don’t want to mess with the great flavor with a sauce.”

Final words: Save the juices that accumulate in the foil or butcher paper used to wrap the brisket for spooning over the sliced brisket.

“Pan juice is liquid gold,” Hudgins said. “If I could figure out a way to sell it, I would.”