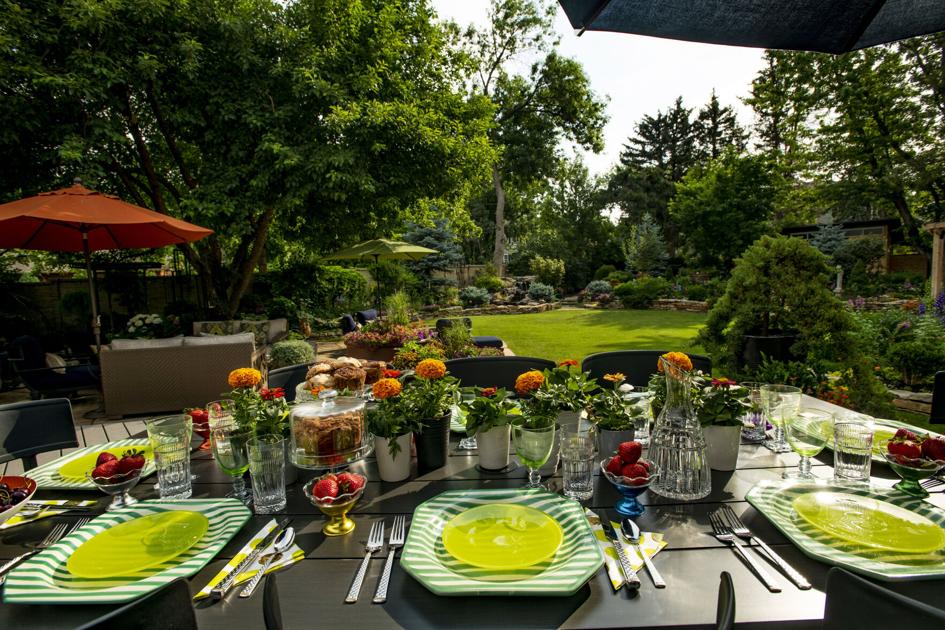 On Instagram, he describes himself as an “insane gardener.”

In real life, you can see it’s true.

Visitors to Rich Schell’s house have been known to have that moment: They walk through his beautifully designed home and arrive in the backyard to experience a sudden moment of awe.

“I find this incredibly emotional,” Schell, 61, said. “I find more beauty in it every day.”

Rich Schell has transformed his backyard into a gorgeous wonderland in the Old North End neighborhood. “I find this incredibly emotional,” Schell, 61, says. “I find more beauty in it every day.”

There’s the overall view to take in, all of the green and the other colors and how the sunlight hits different flowers. There are little stone paths that feel like walking through a fairy garden. Then there’s the details, which Schell says you have to “meander around” to notice.

And that’s true. Since moving into this house in the Old North End neighborhood in 2001, Schell has spent years transforming his indoor and outdoor spaces.

Rich Schell is a self-described maximalist. “I want to break every rule,” he says. “For me, more is more. I want to defy what is supposed to be.”

That has meant 19 years of perfecting every little detail of his backyard, the kind of place that’s perfect for entertaining especially during the summertime.

It’s the place Schell spends every morning after he wakes up with the sunrise.

There’s always something to do in the garden. He often jokes that he puts money into the garden as others might put money toward traveling.

“This is my travel,” he said. “I always tell people to look at your space like what you’d want on your vacation.”

Stone paths are one element in the backyard wonderland Rich Schell has created.

For his design business called Rich Schell Interiors, Schell spends his days applying his design eye to client projects. His garden is where he gets to do his thing.

As a self-described maximalist, that means Schell’s garden is full and full of surprises. There’s a lush mixture of delphiniums, paper poppies, roses and hydrangeas. There’s the antique scale, with each side holding a potted plant. There are deer sculptures that seem to creep up out of nowhere. There’s artwork that’s meant for inside, but Schell insists on bringing some of the same inside vibe to the outside.

“Each flower and plant becomes your child in a way,” Rich Schell says

“I want to break every rule,” he said. “For me, more is more. I want to defy what is supposed to be.”

And it’s the place he wants to unwind with friends while sitting at one of a few seating areas or around the fire pit.

“I want people who visit our home to have an experience,” he said. “I do this for me, but I do it for everybody who sees it.”

While visitors take in the sights and the sound of songs like “Watermelon Sugar” by Harry Styles, Schell might not be able to stop his mind from going while in his garden.

Rich Schell, principal designer with Rich Schell Interiors, has transformed his backyard into a wonderland full of plants and design in the Old North End neighborhood of Colorado Springs on June 18, 2021. (Chancey Bush/ The Gazette)

There’s always something to do.

Even while giving tours, Schell always finds a plant to pull or trim.

“Each flower and plant becomes your child in a way,” he said. “So you just want to take care of them.”

And, he says, you delight in seeing them grow.