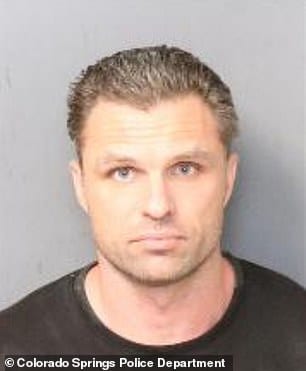 Dane Kallungi, 38, was arrested Wednesday in Albuquerque, New Mexico, more than two weeks after police in Colorado Springs issued a warrant for his arrest.

The husband of a woman who has been missing in Colorado for more than two years has been arrested and charged with first-degree murder.

Dane Kallungi, 38, was arrested Wednesday in Albuquerque, New Mexico, more than two weeks after police in Colorado Springs issued a warrant for his arrest on June 1.

Dane was trying to reach Kirtland Air Force Base in New Mexico when he was arrested, officials said.

His wife, Jepsy Amaga Kallungi, has not been seen since 2019, when she was 26 years old.

Colorado Springs police now believe she was strangled by her husband in a domestic violence incident and her body was buried. FOX 21 reports.

Jepsy had moved from the Philippines to the US in 2017 to marry Kallungi after the couple met on a dating website.

But her mother Margie Amaga became concerned when she suddenly stopped responding to Facebook Messenger messages on March 20, 2019.

Nothing has been heard from Jepsy since then, KKTV, reports.

“I just want to know if she’s alive or dead,” Margie Amaga said a month later. “I don’t know where she is, why she’s gone.”

His wife, Jepsy Amaga Kallungi, has not been seen since 2019, when she was 26 years old

The police launched an investigation into missing persons on April 4, 2019.

They launched that investigation after receiving a call from a friend to check on her well-being, according to: NBC News.

“There was talk of a divorce, but they were married at the time of this incident,” Lieutenant Joe Frabbile said at a news conference on Friday.

Margie said that Dane claimed that Jepsy went to Chicago, Mexico or the Philippines with a friend without taking any ID or her phone.

“Of course Jepsy’s family and friends have always been concerned since March 2019, we have been in touch with relatives in Hong Kong and the Philippines, they have been informed of the arrest and are interested in getting Jepsy back,” Frabbile added.

Jepsy moved from the Philippines to the United States in 2017 and married Danee . in July 2017

Nearly three dozen search warrants were executed during the investigation.

Police have not released a possible motive for the alleged murder, for which Dane is being held without bail.

Margie said that Dane and Jepsy met on an online dating site, which caused Jepsy to move from the Philippines to Colorado to be with him.

She moved from the Philippines to the United States in 2017 and married Dane in July 2017.

Court records show they filed for divorce, but it’s unclear if the divorce was ever finalized.

Police believe Dane moved to San Diego shortly after Jepsy went missing. They want to extradite him from New Mexico to Colorado.

Margie, who lives in Hong Kong, struggles to cope with the investigation as she tries to obtain a visa to the United States.

Jepsy’s body has not been found

‘It’s very difficult for me. It’s really painful for me, because I’m very far,’ she said KOAA. ‘I can’t comfort her and I don’t know where to find her. I do not know. I am alone.’

Shortly after Jepsy’s disappearance, friends gathered to pray for her safe return.

“She just disappeared without a trace and that’s why we’re here to find her,” Rachel Jackson told FOX 21 at the time.

“I hope we get answers to many of our questions soon,” added Lourdes Medina.

according to FOX 21, another friend described Jepsy and Dane’s relationship as “toxic.”

“I asked her, ‘Why do you have to go back with him?’ said Rhanae Ramos after Jepsy disappeared.

“And she said, ‘I want to try the relationship and give it a second chance.’”