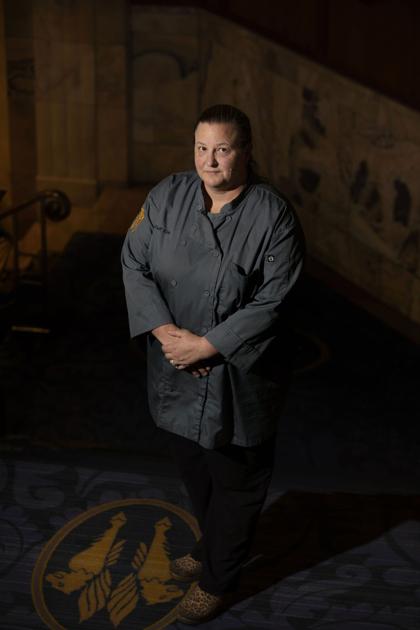 Kimberly Moyle has the distinction of being the first female executive chef at The Brown Palace Hotel & Spa since it opened in 1892.

“I didn’t realize that until I was hired for the position,” she said. “It was astonishing.”

Back in the late 1980s, when she started her career, women in the hospitality industry were more likely to be waitresses than executive chefs. And that’s what her dad was afraid of after she dropped out of college before completing her first semester and went to work at a breakfast house near her western Pennsylvania home.

“I did wait tables, but I also got on the line and cooked,” she said. “I liked being in the kitchen cooking better than interacting with customers.”

That’s when she decided she wanted to pursue a culinary career. Her dad pointed out she’d be “working holidays and long hours” and couldn’t see that as a sustainable life path.

But his gloom-and-doom forecast changed after Moyle earned her associate’s degree from the American Culinary Federation apprenticeship program. She worked her way up to banquet chef at the Greensburg Country Club in Greensburg, Pa., where she oversaw huge banquets.

“By then, my dad had new respect for my capability to support myself as a chef,” she said. “When my sister decided to go to BYU, my dad suggested that I might like to go to Utah with her.”

She took that advice. While her sister was getting settled in at Brigham Young, Moyle dropped off resumes at seven restaurants and ended up landing an executive sous chef position at Sundance Resort in Sundance, Utah.

That was in 1992. She stayed in Utah for 22 years, working her way through an executive sous chef position at the Marriott City Center in Salt Lake and executive chef jobs at two other properties: Talisker Club & Canyons Resort in Park City (where she met her husband) and the Radisson Salt Lake.

“The couple decided they wanted experience some place out of Utah,” she said. “A recruiter told me about an executive chef position at Sheraton Music City in Nashville, Tenn. It sounded like a great place to work, plus my husband was able to get work at Opryland.”

That was in 2014. Five years later, the couple had grown tired of the humidity and heat and began looking for opportunities in the West again.

During her time at Sheraton Music City, she became acquainted with Darin Pain, who worked for a temporary employee placement company. He helped her find seasonal workers for her restaurants, then ended up helping her get the first job that would take her to Colorado.

“Darin had started working for Executives by Sterling, a recruitment company in Denver, so I contacted him,” she said. “He found me a great executive chef job at Devil’s Thumb Ranch in Tabernash, and we moved to Colorado in 2019.”

And when Pain learned of an opening for executive chef at The Brown Palace, he suggested she apply. She started that job in time for Thanksgiving 2020. She oversees the hotel’s three restaurants — Palace Arms, Ellyngton’s and the Ship Tavern — as well as the afternoon teas in the Atrium Lobby, the banquet operation and other bars and lounges.

Moyle refers to herself as “the fixer” because she’s very good at cleaning up kitchen processes such as inventories, time management and menu pricing.

“I strive to bring new ideas,” she said. “The first menu I worked on for the hotel was for the Palace Arms. It reopened May 27 after being closed because of the pandemic.”

There, for example, she added a wild mushroom tart, in which the main ingredient comes from Mystic Mountain Mushrooms near Grand Lake. She sources beef from Grand County’s Fitch Ranch.

She plans on retooling the menus at Ellyngton’s and the Ship Tavern, and giving the tea menu “a little overhaul too.” The afternoon teas are wildly popular, with hundreds of guests served daily. The hotel is changing its tea selection, which has a menu of about a dozen teas now.

“The new company we are looking at will have around 200 teas from which to select,” she said. “The current (tea) menu hasn’t changed since 1984, and the process has been the same in some form for 120 years. I’m not going to change the signature egg salad and cucumber sandwiches, maybe elevate the presentation.”

Whether it’s enjoying high tea, elegant fine dining or a pub-style lunch or supper, you’re sure to find some new flare under the watchful and creative eye of chef Moyle.