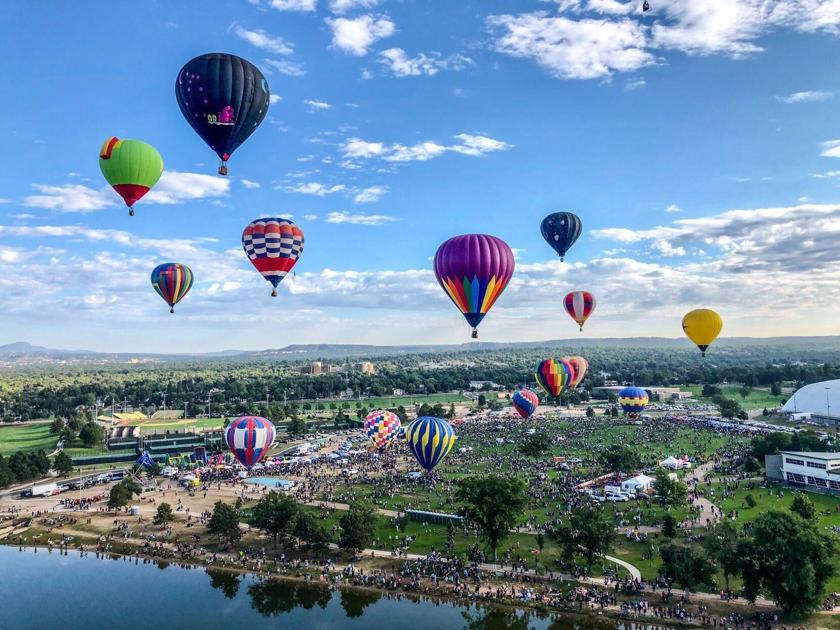 Balloon Meister is bound to be on the list of best job titles.

And it’s a duty Dave Bair has taken seriously for six years. He’s the man responsible for all 79 hot air balloon pilots at this year’s Colorado Springs Labor Day Lift Off, the largest number of pilots the event has hosted. He works with the Colorado Springs Airport, the military bases and the Federal Aviation Administration to make sure those pilots and their balloons take off and land safely during all three days of the popular Labor Day weekend event.

In order to give the OK for balloons to take flight, the Balloon Meister and others consider a number of things, but mostly sky conditions, including precipitation and wind. Rain? No balloons. Winds measured at higher than 10 knots on the ground? No balloons.

“Given our record at the event, a pretty good percentage of flights go up,” Bair said. “Friday is a media day. Out of four days, we’re consistently getting three of those per year. It’s unusual for us to cancel more than one day in a given weekend.”

The Lift Off is free and runs Saturday, Sept. 4th – Monday. Sept. 6 in Memorial Park. Currently, there are no pandemic-related restrictions on outdoor events, though organizers are staying up to date through the El Paso County Health Department. Last year’s event was canceled, though balloons did fly from sites around the city.

“This is unique to this community,” said the event’s media liaison Aubrey McCoy. “The pure volume of balloons that take off, dip into Prospect Lake, and Pikes Peak in the background — the visual of it is phenomenal. If people are looking to get back out into community events, this is one to do that safely. They can watch from the outskirts of the park or get in the mix.”

This year’s event will resemble those of years past, with seven specially-shaped balloons, including a sloth, cartoon characters and the ever-popular crab. The Balloon Glow also will be back on Saturday and Sunday evenings, preceded by the new Battle of the Bands competition, performances by aerial acrobats, concerts and a beer garden. Jumpers from the U.S. Air Force Academy’s Wings of Blue will perform Saturday and Sunday mornings.

New this year are remote control balloon displays. Ten pilots will fly scale models of balloons, which are about 25-to-35-feet tall, after the big balloons take flight.

Local flight legend Dewey Reinhard first imagined the festival into reality in 1976, dubbing it the Colorado Springs Balloon Festival. It eventually became the Colorado Balloon Classic, and grew into one of the largest free festivals of its kind in the world, attracting more than 150,000 people. In 2015, it changed hands and was renamed the Labor Day Lift Off.

Bair, a longtime balloonist, has flown in about 20 festivals, though he’s not allowed to fly nowadays as a festival organizer. But he does remember his first time flying at the event, in the early 1990s. After sending in his application, Reinhard gave him a call.

“He said ‘I don’t know. You’re pretty young and inexperienced. What makes you think you’ve got what it takes?'” Bair remembered. ‘He interviewed me and raked me over the coals for a good hour, all in the name of safety. You only want pilots capable of flying here. It can be challenging. He said ‘OK, come fly, just don’t screw it up.'”

Bair and his brother wound up taking first place in the balloon competition, known as the hare and hound race, which involves balloonists trying to get the closest to throwing a mark and hitting a fabric target set on the ground by the hare balloon.

“Dewey told me I was always invited to come back. And I’ve stuck with it.”