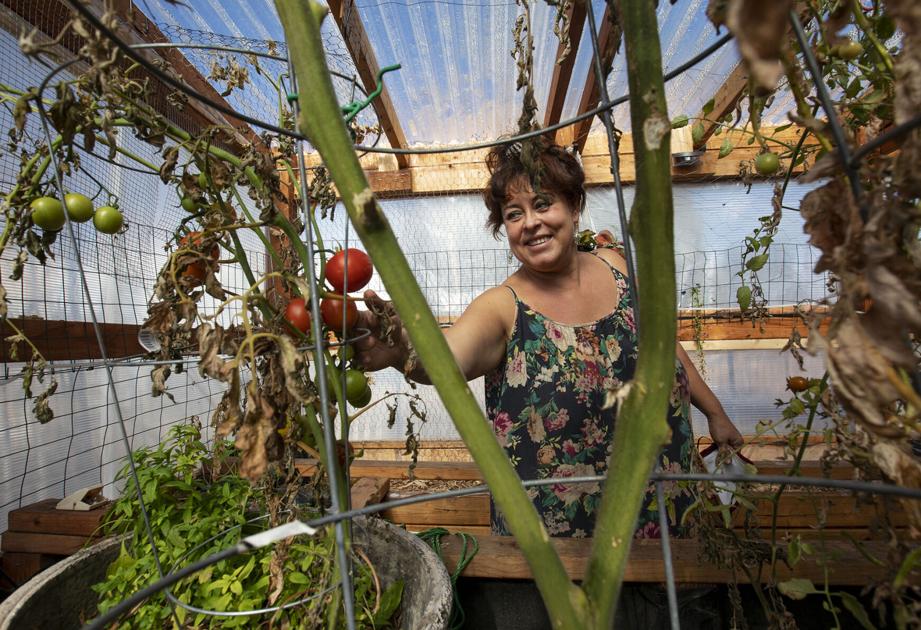 If you plant it, will it grow?

That’s the question from inside the experimental world of growing new vegetables from old vegetable scraps, such as pits, seeds and stem tips.

Lana Smith thought it might be fun to grow an avocado tree, despite the fact that we live in cold, humidity-free Colorado, and avocado trees do best in a subtropical climate. She was up for a little experimenting in her lab, also known as her piano studio, which she describes as a “botanical garden.” The piano teacher says playing the piano puts extra moisture in the air — perfect for a burgeoning avocado seedling.

She stuck a toothpick into each side of the avocado pit and rested it on a container of water, careful to submerge only the bottom of the pit, lest the whole thing rot. As soon as she saw roots, she put it in soil.

Her experiment kind of worked — she now has a 2-year-old tree that stands about 4 1/2 feet high. But there’s one problem: no fruit.

“It’s just pretty,” Smith says. “It has beautiful foliage. For producing avocados it needs more humidity, a bigger pot, more light and it needs to be in some special environment, but it’s not my goal to produce avocados.”

Social media was rife this year with somebody somewhere attempting to grow a full-fledged plant from the scraps of a used vegetable. Perhaps this was pandemic gardening at its finest. With extra time at home and anxiety over reports of potentially not being able to find fresh food, we, the pseudo gardeners of Facebook, were reduced to creating something out of not much.

Robin Boutilier, perennial manager and general manager of Good Earth Garden Center, has seen her fair share of such gardening experiments. If people are doing them solely to grow food, they likely will stay hungry. But if it’s just for fun? Sure, why not.

“It’s been around for decades, probably centuries,” says Boutilier of the great avocado experiment. “None of this is new. If they want to plug a carrot top into the ground and see how long the top will stay green and growing and if it perpetuates itself, they’re great experiments.”

Smith might argue otherwise. In addition to her flourishing avocado tree, she’s grown ginger the same way. It did well for a long time, she says, until it got too long and shaggy and she tossed it. She’s also had luck with growing celery by chopping off the bottom of the stalk and putting it in the ground year-round or in an indoors pot. Same with onions, she says.

“This is very popular in Russia,” says the Russian, who moved to the U.S. two decades ago. “In the 1960s or ’70s, people didn’t have big stores like Walmart and no big grocery stores where you can buy from different parts of the world. In the winter, people had a lack of vitamins, and close to spring people were deficient on vitamins. They grew onions on window sills to put in salads for vitamin C.”

Experimenters also have a penchant for slicing off the top of a pineapple and dropping it in water. After it grows, they can put it in dirt and wait 18 months for fresh fruit to grow.

Oh, wait. There’s no way that will happen here, Boutilier says. But it will make a plant that resembles a bromeliad.

If you’re eager for a modicum of success in the great kitchen scrap experiment, go with regrowing herbs. Boutilier’s had luck with rosemary, basil and chives. Cut a 4- to 6-inch stem tip and put it in clean potting soil, along with a rooting hormone, she says. It’ll take three to 10 weeks to root if you keep it moist and humid. The same goes for basil and chives.

“But you have to have really good light to extend the day length,” she says. “They do tomatoes indoors year-round. For some it works. For most it probably doesn’t, but again, it’s a nice experiment.”

Faye McRoy harbors no expectations for fresh vegetables when she cuts the ends off celery and carrots.

“All they do is make a plant,” says the Black Forest gardener. “That’s the whole idea. They’re very pretty.”

McRoy dreams bigger dreams: trees. Think sycamore, hickory note, Red Delicious apple, clementine and peach. She took sycamore and hickory note seeds from trees, put them in dirt in a pan inside and transplanted them outside. Her sycamore is now about a foot tall, though she laments the death of her hickory note and wishes she’d kept it inside for a year. The apple tree is now about 8 feet tall, but she doesn’t expect to make apple pie anytime soon. Same goes for the clementine and peach endeavors.

But that’s how the garden game works. Some things live. Some things die. All’s fair in gardening and the Colorado climate. So it’s probably best to keep a devil-may-care attitude toward such things.

“If it fails, this is horticulture and you’re going to kill stuff,” Boutilier says. “When something goes south, you can research more deeply and figure out why it failed. Good gardeners still kill things, but learn from mistakes and move on.”