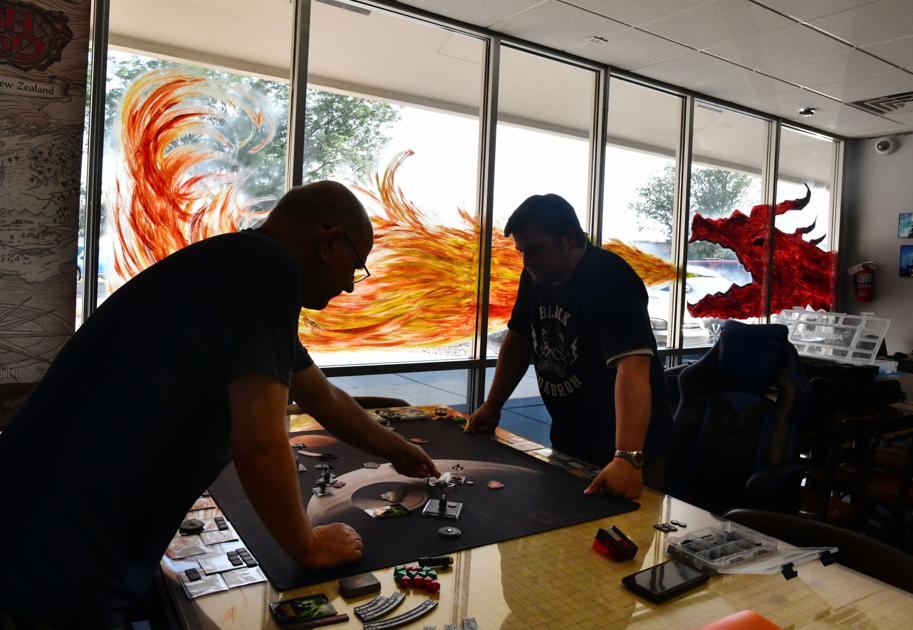 In the second grade, two boys became best friends. The next year, they started playing Dungeons and Dragons together.

And they never really stopped.

A few decades later, friends Jared Scriven and Clay Fuchs have turned their lifelong love of games into a gaming store/coffee shop called Dungeons and Javas in Colorado Springs.

It hasn’t been all fun and games so far, though.

The pair, along with Scriven’s wife, Candus, opened Dungeons and Java in May 2020, enduring months of slow business due to the pandemic.

But people showed up. They rented games from the shop’s library. They bought games for Christmas presents in hopes of helping it stay open.

Each day, Dungeons and Javas is fulfilling its purpose, which wasn’t possible much over the last year. The shop has a packed list of weekly events, including a family board game night on Sundays and a regular meeting of the Colorado Springs Board Game Club.

A group of friends play a Geek trivia game on Tuesday, July 20, 2021. The game was being played at Dungeons and Java, a gaming store/coffee shop, which was started by two friends in May 2020.

People come in randomly, too, when they’re looking for a place to play a new game or paint Dungeons and Dragons miniatures.

Scriven said they hosted events via Zoom, but it just wasn’t the same.

“It was apparent during COVID what we were missing,” he said. “The thing I enjoy about gaming is getting together with your friends and laughing and actually having conversations.”

As people are able to do that again, they’re seeking out Dungeons and Javas.

The place off Austin Bluffs Parkway follows suit of similar concepts like Board Game Republic in Denver.

And, yes, this is a dream place for gamers, whether they’re friends or strangers.

Jared Scriven, along with longtime friend Clay Fuchs, started Dungeons and Java, a gaming store/coffee shop, in May 2020. The shop sells games and coffee and also has long tables that allow patrons to play their own games or borrow one belonging to the store.

Inside, one corner of the walls are painted to resemble a stoney dungeon. There are rows and rows of games to choose from.

Tables, which Scriven calls “ultimate gaming tables” are set up around the shop, complete with player pads and cup holders.

There’s also a VIP game room with a library of digital maps and the ability to play music and sound effects.

And, to fill those cup holders, there’s a menu of coffee options called “potions” and themed after Dungeons and Dragons.

So far, those details have helped create a community.

A giant monsteous eyeball looks down on customers and barristas in the coffee shop area of Dungeons and Java on Tuesday, July 20, 2021. The game was being played at Dungeons and Java, a gaming store/coffee shop, which was started by two friends in May 2020. (Photo by Jerilee Bennett, The Gazette

“We wanted to have a gaming store where everyone feels welcome,” Scriven said. “And to be that place for people to go and be with their friends.”

And it’s a different experience than playing games at home.

“When you actually go to the store to play games, it allows you to disconnect and get away from whatever’s going on in life,” he said. “It’s like an escape.”

Now that Dungeons and Javas has survived its first year in business and the pandemic, Scriven said he’s looking forward to what’s next.