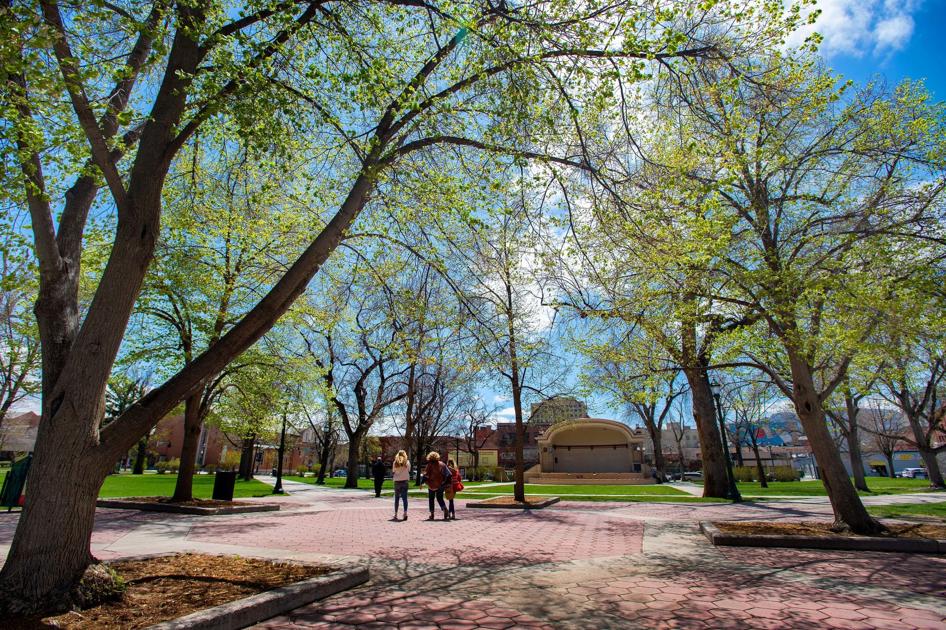 A downtown dog park, a permanent ice rink and a stone labyrinth are some of the big ideas the city is proposing to revitalize downtown Colorado Springs parks in a draft master plan.

The city expects to make some of those plans for Acacia, Antlers and Alamo Square parks a reality with $2 million of designated tax revenue in honor of the city’s 150-year anniversary in 2021, said Connie Schmeisser, a city landscape architect.

Even though the city is preparing for another round of budget cuts driven by economic fallout from the coronavirus, the plans for the parks improvements will go forward because the funding was approved by voters, Mayor John Suthers said.

“That money is in the bank,” he said.  “…Colorado Springs residents love their parks, (the money) has to be used for that purpose, obviously that is what we are going to do,” he said.

City voters approved a measure in November allowing the city to keep $7 million in tax revenue collected in excess of the cap set by the Taxpayers Bill of Rights for parks and trails. The funding cannot be used for other city expenses, such as the police and fire departments.

The historic parks have been neglected and investing in them will serve the residents moving into the thousands of new units planned for the downtown area, Colorado Springs City Council President Richard Skorman said.

“They will certainly be well-used and appreciated,” he said.

The first round of projects to beautify and draw visitors to each park will be based on the long-term master plan that is nearing completion after a year of work and has been put out for public review through Tuesday. However, the city will need additional revenue to build all the ambitious projects outlined in the master plan for the downtown parks. The estimates for all the planned improvements have not been completed, Schmeisser said.

The city’s long-term vision for Acacia Park, Colorado Springs’ first park donated to the city in 1871 by its founder, Gen. William Jackson Palmer, includes a permanent ice arena, a large play area on the western side of the park, and either a renovation or replacement of the band shell. The city hasn’t determined which it would finish in time for the city’s anniversary next year, Schmeisser said.

The permanent ice arena could be built in the center of the park with new seating and space for four to six vendors, she said. The city expects an ice arena will be sustainable even as the winters warm, she said.

In the summer, the ice arena could be covered with an artificial turf and provide space for activities such as yoga classes or kids games, she said.

The band shell built in 1914 also needs to be evaluated for renovation or replacement because electrical and lighting problems keep it from seeing much use, Schmeisser said.

“Many citizens support a new open air stage with new improved lighting, sound and open lines of sight,” a city presentation said about the band shell.

Antlers Park, adjacent to the Antlers Hotel, is due for upgrades with 57% of respondents to a city survey saying they are extremely unsatisfied or unsatisfied with the park, according to a city presentation.

The city’s first step in revitalizing the area will be a temporary dog park that could become permanent and feature a splash pad, Schmeisser said.

In the long term, the city is planning to realign the paths through the park to create a large shaded lawn in the northeast corner that would be overlooked by terraced seating. One of the new pathways would be elevated to bring visitors closer to the tree canopies, she said.

The city may also put in a rock climbing structure and a slide for children built into a small man-made mound that they can scramble up, she said.

To help screen the parking garage on the park’s eastern side from park visitors the city is considering a “green wall” or a wall of vegetation, city plans show.

One of the first projects in Alamo Square Park, the grounds of the Colorado Springs Pioneers Museum, could be restoring the historic gazebo, Schmeisser said.

In the long term, the city is planning to expand the southern plaza and put in a new stone labyrinth and timeline in the pavement that would tell the history of the area. When the city repaves the southern plaza it would likely also fix the uneven pavement to improve access for those with disabilities.

The city is also planning to put in lighted seating along the southern edge of the plaza near new food truck parking on East Vermijo Avenue.

All the parks are also expected to get improved lighting and additional trees since many of the ash trees in the parks could die if the emerald ash borer, a beetle, invades Colorado Springs, according to the city’s presentation.

Residents interested in providing feedback on the plans for the downtown parks can visit coloradosprings.gov/downtownhistoricparks.