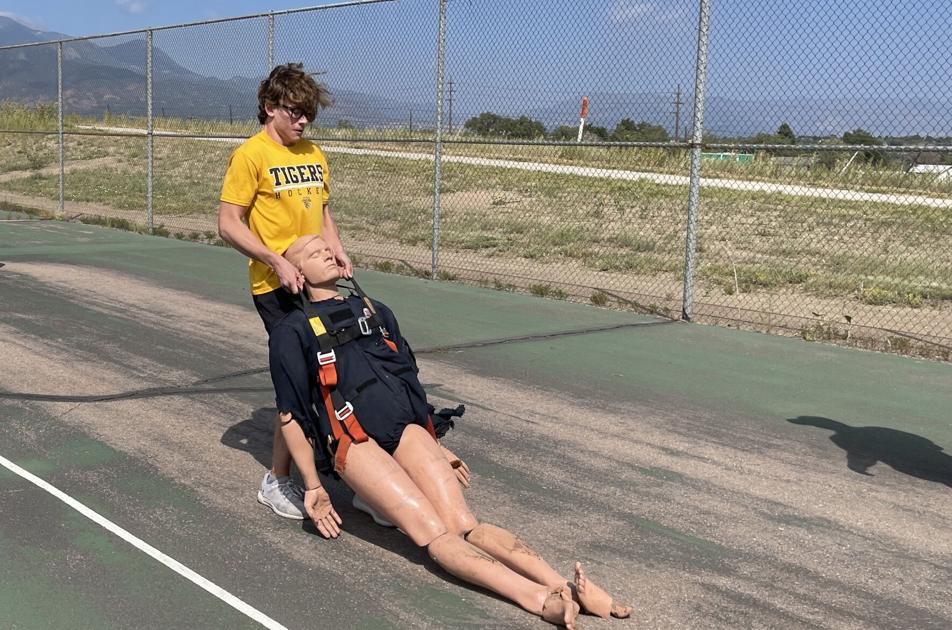 Nearly two dozen members of the Tigers AAA 18-and-under hockey team showed up at PPCC’s Centennial Campus on South Academy Boulevard for the Aug. 21 event. It was one of several planned activities aimed at bolstering a recruiting effort that suffered a setback last year with the onset of the COVID-19 pandemic, according to public safety recruiter Jerome Lemons.

“We needed to try some different strategies to make up for 2020,” said Lemons, a 15-year CSFD veteran. “We normally hold in-person events like job fairs throughout the year, but we couldn’t do that last year.”

Last year was a challenging one for fire crews across the state. Colorado saw an unprecedented wildfire season that included the three largest blazes in the state’s 150-year history. The Cameron Peak, East Troublesome and Pine Gulch fires destroyed hundreds of homes and buildings and scorched more than half a million acres.

A brainstorming session between Lemons and PPCC Fire Science Technology co-chair Jamie Gutschick gave birth to an idea that could help increase awareness of the fire service while infusing an element of play into the recruitment process.

“We wanted to make it informative and fun,” Lemons said. “I mean, they’re athletes and they’re in great shape, but they’re also young people who like to have fun.”

Teen athletes were a natural fit for the event, not just because they’re physically fit, but also because they tend to be competitive and open to new challenges.

“A lot of the traits (that make a successful athlete) carry over to firefighting,” said Gutschick, a veteran firefighter.

An array of firefighting equipment was set out for display to allow the young athletes to gain some hands-on experience with the tools of the job. After that, the hockey players were offered the chance to go through the firefighter’s crucible: the candidate physical ability test.

A standard physical evaluation for firefighters nationwide, the CPAT is a grueling strength and endurance test that simulates some of the tasks firefighters perform in the course of their duties. Candidates must perform a series of eight tasks, including a hose drag, an equipment carry and a forcible entry — all while laden with a 50-pound vest that simulates the weight of a full set of firefighting gear. To simulate the weight of a fire hose, an additional 25 pounds are added during the stair climb. In order to pass, candidates must go through all eight stations in 10 minutes, 20 seconds or less.

“It’s very demanding on the legs and lungs,” Gutschick said.

“Some of the kids were hesitant about it at first,” Lemons said. “But after a couple of kids went through the course and passed it, it became a competition.”

All 22 of the youth hockey players passed the test, Gutschick said.

“It was a huge success,” he said. “The collaboration between the organizations, and the event itself, went better than I could have imagined.”

“It was a real eye-opener on both sides,” said Tigers head coach Kevin Holmstrom. “The kids were impressed with the event, and I think the department and the college were pretty impressed with our kids.”

Lemons said he hopes to hold similar — and larger— events in the near future.

“It’ll help Pikes Peak Community College’s program to grow, and in turn will help us with public interest and recruitment,” Lemons said. “Even if you don’t necessarily want to be a firefighter, you can be an investigator, or an inspector or a medic. We have a lot of options available.”