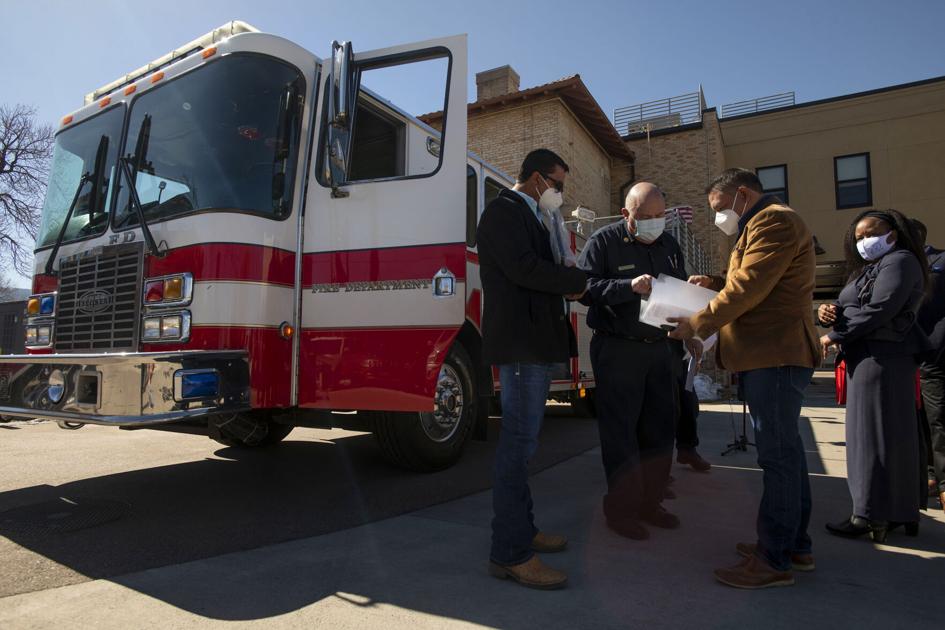 Five firefighters and several city staff members from Nuevo Casas Grandes, Mexico piled into SUVs and embarked on a 22-hour road trip to Colorado Springs for one prized item. A firetruck.

The Colorado Springs Fire Department donated a 1997 HME Becker Type 1 fire engine to the fire department in Nuevo Casas Grandes and its surrounding communities as a way of putting to use some of the Colorado Springs’ older emergency equipment.

“It feels so good to us to know that a piece of equipment is going to have more life and make a different in other peoples lives in another community,” Fire Chief Ted Collas said Wednesday during a ceremonial handover of the rig.

This is the second fire truck Colorado Springs donated to Nuevo Casas Grandes, a city of 55,000 in the northern Mexico state of Chihuahua, in an effort to help expand its second fire station.

“That means a lot for our us, for our city, for our people,” Nuevo Casas Grandes Fire Chief Christian Ontiveros Dorame said. “This is going to be a perfect tool for that fire station.”

“This one has been on the market for a while … and we thought, there’s a better purpose for this, it can be used by somebody who can put it into front line service right now,” Collas said.

The two fire departments coordinated to have a team from Nuevo Casas Grandes pick up the vehicle but Donna Nelson, who helps with Colorado Springs sister city coordination said they ran into trouble at the southern border.

“Unfortunately there was a problem at the border, there was miscommunication and so I had to call and I spoke with an officer there,” Nelson said.

Eventually the crew passed through the border and continued to Colorado Springs. But on their way back to Mexico the crew will be taking more than just a fire truck with them.

The Rotary Club of Colorado Springs donated clothing, shoes, books and toys for an orphanage in Nuevo Casas Grandes.

“The children said they wanted nice clothing to go to church,” Nelson said. “I said, ‘Oh my goodness that breaks my heart’.”

The Mexican crew will spend one night in Colorado Springs before starting the 22-hour drive to Nuevo Casas Grandes, Nelson said.