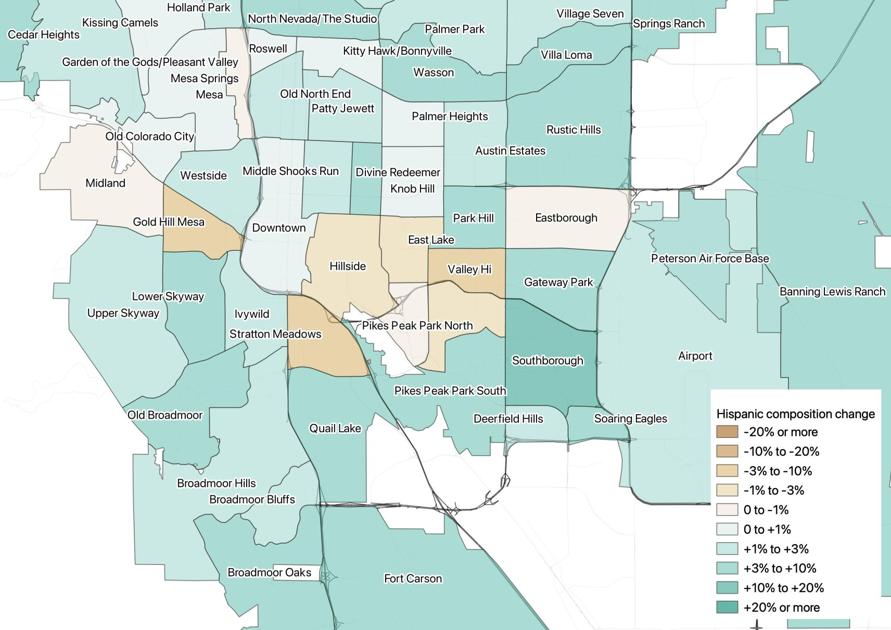 Most of Colorado Springs became more diverse over the last 10 years, data from the 2020 U.S. Census show, as the Hispanic population grew rapidly throughout most of the community and more Black residents moved into the growing northeastern and eastern sections of the city.

The city’s growing diversity was in step with national trends that show the country is seeing rapid growth among minority populations, according to the fresh numbers from the decennial count.

In El Paso County, the Hispanic population grew by 36,319 residents, or 38%, over 10 years and saw the greatest number of new people of any racial or ethnic group locally.

The white population took second place for new residents in El Paso County, growing by 32,537 or 7%. The county’s total population grew by 108,132 residents or about 17%.

“There are more creative ideas and solutions to community issues,” Garner said. “As a community grows there can be differences in background among residents, which can lead to new thought processes and policies.”

The Black community in town has grown by about 2,000 people or about 8.1% during the past 10 years, Garner said.

If the trends continue, Julissa Soto, a health equity consultant who works with Hispanic residents, expects Colorado Springs to look a lot more like Denver in the next five to 10 years.

Business owner and housing authority board member Eric Phillips was among those pleased to hear diverse populations are moving into many new neighborhoods instead of splitting into defined groups and saying: “This is your side. This is our side,” he said.

“We are becoming more diverse without the segregation,” said Phillips, who serves on the El Pomar Foundation’s Black Advisory Council.

Phillips lives in the northeast part of town, a growing area that is also seeing increasing percentages of Hispanic and Black residents, a trend Phillips believes is positive particularly for children in school.

As diversity increases, he would like to see those perspectives reflected on school and city boards. He actively recruits residents to get involved in city advisory committees that guide decisions about parks, transportation and other decisions.

“We need to pay attention and get engaged in the city, he said.

Hispanic residents are a growing segment throughout the community, and include a diverse set of groups such as those who have fled violence in Guatemala and Honduras in recent years, and those from families who trace their American-born lineage back centuries.

The diversity within the Latino community is reflected in the data with three times as many Latino residents in the state identifying as multiracial or other rather than white compared to 2010, said Joelle Martinez, executive director of the Latino Leadership Institute.

“You are seeing a generational push that we can’t oversimplify identity and culture,” she said.

She also expects the rapid growth across wide areas means Latinos will be impacting all areas of political, social and economic life, she said.

For example, over the next five years, about half of new employees coming into fill positions, known as workforce replacement, are going to be Latino, she said.

The nation is also likely to have to rely on immigrants, including those of Hispanic origins, to fill the needs of a growing economy. She would like to see fair immigration reform to ensure that newly arrived workers are treated well and inequitable policies are not repeated, she said.

Martinez expects the political influence of Latinos will also increase, and she would like to see them included in the political process early on, and to see them hold more elected positions. When Latinos are elected they ensure the Latino community is more active, she said.

“It is no longer viable for any candidates to ignore Latinos regardless of where they are,” she said.

Still they remain under-represented in political office, making up only 2% of those in elected office across the state, she said.

As the Hispanic population grows, Councilwoman Yolanda Avila said she does not expect it will contribute much to a shift toward more progressive politics because Latinos hold a variety of political beliefs and some in town are stalwart Republicans following their military service, she said. She would like to see more Latinos in politics locally.

“The military contributes — it’s not the sole cause, but it contributes to a more conservative leaning,” she said.

Latinos have always had a fairly dispersed presence in town, but, in her experience, still face some discrimination, she said.

“It is just covered in (politically correct) language. …  just more covert,” she said.

Second-generation immigrant Connie Solano De Benavidez has watched the Latino community grow since moving to town in 1958 from Avondale, east of Pueblo. She remembers retail workers following her around because they didn’t trust her and residents making fun of her Spanish accent.

The change has been slow but notable and more people appreciate Mexican culture, she said. She’s noticed more people will stop to watch and really enjoy performances of Ballet Folklórico de la Raza, a group she founded in 1994, she said. At 83, the self-taught seamstress is still making the dresses for her group and was honored by the Pioneers Museum for her work. One of her dresses is still on display, evidence that Hispanic culture has become more visible in town.

“I love what I do, but I didn’t think I would be honored,” she said.

As the Hispanic community continues to grow, she said she would like to see the community focus more on integration by learning English and educational achievement, so they can succeed in business and move away from blue-collar work.

“If we work hard on integration we are going to see a shift,” said Soto, who is a first-generation immigrant herself.

The pandemic demonstrated that the community needs to work harder at integration, since COVID-19 vaccination rates among the Hispanic community are still disproportionately low, she said. Hispanics represent 20% of the state population but only 11% of those residents are vaccinated, state health department data show.

In particular, Soto would like to reach Hispanic women to see possibilities for themselves beyond marriage and family.

“I want Latina girls to see that it can happen. We can change some things and integrate, not forgetting about what we come from,” she said.

From southeast to northeast

Anecdotally, at least some of the Black residents from the southeast are moving into the new northeast and eastern neighborhoods.

Latrina Ollie is among the Black residents who recently left the southeast to buy a new home in Banning Lewis Ranch, even though she still works in the southeast and her younger children attend school there.

“I feel like down in the southeast there is a limited amount of growth. … It kind of makes us go outside of southeast to find the housing area that we want,” she said.

The southeast also has limited entertainment and dining options, so residents have to leave the community to find activities, she said. However, she is seeing positive change in the neighborhoods with far more apartments slated to go in and far more people spending time outside, she said.

Lelia Gibson-Green, a resident leader with RISE Southeast, sees the residents moving out of the southeast as success stories.

“They have options now based on their skill sets, their income,” she said.

Within southeast neighborhoods, she is also seeing lots of advocacy, particularly among young people, to improve the area. The new $9 million construction at Panorama Park is one of the most notable recent improvements, she said. Neighbors would also like to see improved transportation, bike lanes, grocery stores and new entertainment options.

Hillside, a historically Black neighborhood, saw more white residents move in and the Black population decline as rents in the area have increased. Ten years ago, Hillside was one of the few majority non-white neighborhoods in Colorado Springs. But with dwindling Black, Hispanic and Asian residents, it was the only neighborhood to go from a minority-majority area to majority-white.

June Waller, a Hillside resident and retired housing professional, said she has watched the gentrification in recent years as older Black residents have died and their beneficiaries have sold their homes.

Some of the homes are getting converted into duplexes and fourplexes and rented out, a transition that can destabilize an area, even as homes are upgraded, she said.

“It makes the neighborhood look nice, but that’s not what makes a neighborhood,” she said.

Gentrification is possible in other southeast neighborhoods as more employers move into the business park around the Colorado Springs Airport. Avila expects the Airport area could become its own “little city” with time.

The city is also starting work on a neighborhood plan for the southeast to address its lack of green space and trees, poverty, crime and other issues.

At the same time, Avila doesn’t want to see people displaced from their homes through gentrification as the area improves.

“How do we improve and revitalize and at the same time not gentrify? … That’s the question that I ask,” she said.