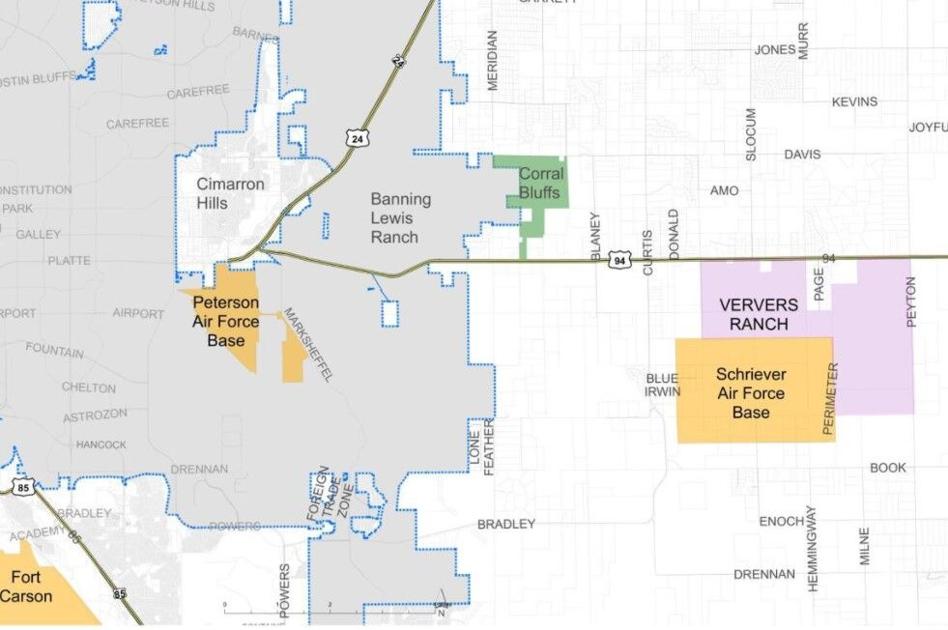 One of Colorado Springs’ most successful homebuilders and developers is proposing one of the area’s most ambitious real estate projects in recent years — an upscale, master-planned community with thousands of homes on 5,400 acres several miles east of the city and adjacent to Schriever Air Force Base.

A land company controlled by Jeff Smith, one of three owners of Springs-based Classic Cos., in August bought a sprawling, historic cattle property known as the Ververs Ranch, southeast of Colorado 94 and Enoch Road and abutting Schriever.

A luxury hotel and conference center also are possible, Smith said in an interview.

The project could take more than 30 years to develop, he said. Smith has proposed Flying Horse East on his own and it’s not a Classic Cos. project, though he could hire the company to help him with its development.

“Flying Horse would be the premium brand in this locale and it’s going to take significant dollars to create the environment that we’re all very proud of, that the homebuyers would feel comfortable buying a $600,000 or $800,000 home,” he said.

But the scope of Smith’s proposed project — the number of homes, amenities and the like — ultimately will be tied to two key factors: whether Colorado Springs becomes the permanent home of U.S. Space Command and a possible annexation of his Flying Horse East property by the city.

For now, Space Command, which oversees the satellite efforts of all military branches, is located at Peterson Air Force Base on Colorado Springs’ southeast side and will remain there until 2026, according to an announcement by federal officials in May. By January, the Pentagon and President Donald Trump are expected to designate a permanent home for Space Command.

Colorado Springs and the Pikes Peak region are vying with cities and states nationwide that want to land the command because of its more than 1,400 troops and civilian workers and the likelihood it will attract a network of contractors and highly paid space industry jobs and billions of dollars in long-term investment.

If Space Command comes to the Pikes Peak region permanently and all or potions of it are based at Schriever, then Flying Horse East could become a highly attractive development, Smith said. Without Space Command, however, it might be a scaled-down project with fewer homes, he said.

“If there’s not a significant economic generator like a Space Command, then we’ll let the market dictate, but I would anticipate that it would be a much slower, modest real estate project,” Smith said.

Annexation by the city also could dictate the project’s future because it would bring highly desirable city utilities to what’s now a rural area where a dedicated water source, in particular, can be hard to come by.

Water and other utilities would allow an urban style development; without water, Smith said the project likely would remain in unincorporated El Paso County and could be developed with 35-acre lots, commonly called ranchettes. Or, it might remain a cattle ranch, he said.

Up to now, Smith said he’s met with city officials for preliminary annexation discussions involving his project. A possible annexation request to the city could come in the first quarter of next year, after a decision is made about Space Command’s permanent home, he said.

The city, meanwhile, has made “no commitments” and “no promises” to Smith or his representatives about an annexation and an annexation request would be treated like any other received by the city, said Jeff Greene, chief of staff for Colorado Springs Mayor John Suthers.

“There have been inquiries about the possibility of annexation,” Greene said. “At the given time when there’s the request or petition to annex, we will go through a very comprehensive planning process to address all the requirements associated with the annexation.”

That process could last at least two years after an annexation request is received, said Peter Wysocki, the city’s planning and development director.

The Colorado Springs City Council would have the final say on approving any annexation request.

Annexation of the proposed Flying Horse East property, however, would raise several questions.

The site is 4 to 5 miles east of the Banning Lewis Ranch, which makes up the eastern one-third of Colorado Springs.

Since the property doesn’t touch any portion of Colorado Springs, the city could only add the proposed Flying Horse East site via what’s known as a flagpole annexation. The sometimes controversial method requires a municipality to annex a lengthy strip of land — or pole — in order to reach a much larger tract that’s referred to as the flag.

In 2013, the city of Fountain used a flagpole annexation to extend its boundaries several miles to the north in order to annex a site on the south edge of Colorado Springs. The property was developed into a shopping center anchored by Sam’s Club and Walmart, which pumped sales tax revenue into Fountain’s coffers.

Colorado 94 would serve as the connector reaching to the Flying Horse East site, and, under state law, city officials would be required to make annexation available to adjacent landowners along the highway.

As it does with any other annexation request, the city of Colorado Springs also would have to consider the financial implications of such an addition and the costs to provide city services to the area.

The proposed Flying Horse East property would be one of the largest annexations in recent city history; by comparison, the Banning Lewis Ranch was about 25,000 acres when it was annexed in 1988 and Briargate was about 10,000 acres in the early 1970s.

The study, which Smith said is expected to be completed in the next month, would provide three scenarios — if Space Command locates at Schriever, if it were housed at Peterson Air Force Base and if the command doesn’t come to the Springs at all.

Other questions raised by a possible Flying Horse East annexation include whether utilities also would be extended to Schriever and the future of Colorado 94, a hilly, sometimes twisty two-lane highway that serves as an east-west link from central and eastern El Paso County to Colorado Springs.

At the same time, Greene said a possible annexation request for Smith’s property puts a spotlight on the need for discussions between the City Council and mayor’s office on several big-picture issues. Among them: growth, transportation, utilities and the needs of area military installations.

The evolution of the city’s sales tax base also is a long-term concern, Greene said.

Home construction has soared in unincorporated El Paso County and many of those residents drive Colorado Springs roads on their way to jobs or use other city services. Yet the city doesn’t collect sales taxes on the items they buy in shopping centers outside the Springs or if they have products delivered to their homes via online purchases.

“There’s still a responsibility that we have as a city to look at what the growth of the region is going to be and how that’s going to impact the city,” Greene said. “We have to be in a proactive position. There has to be a policy discussion between the mayor and the City Council. … The city can no longer put its head in the sand and not be proactive as to how we look at future growth.”