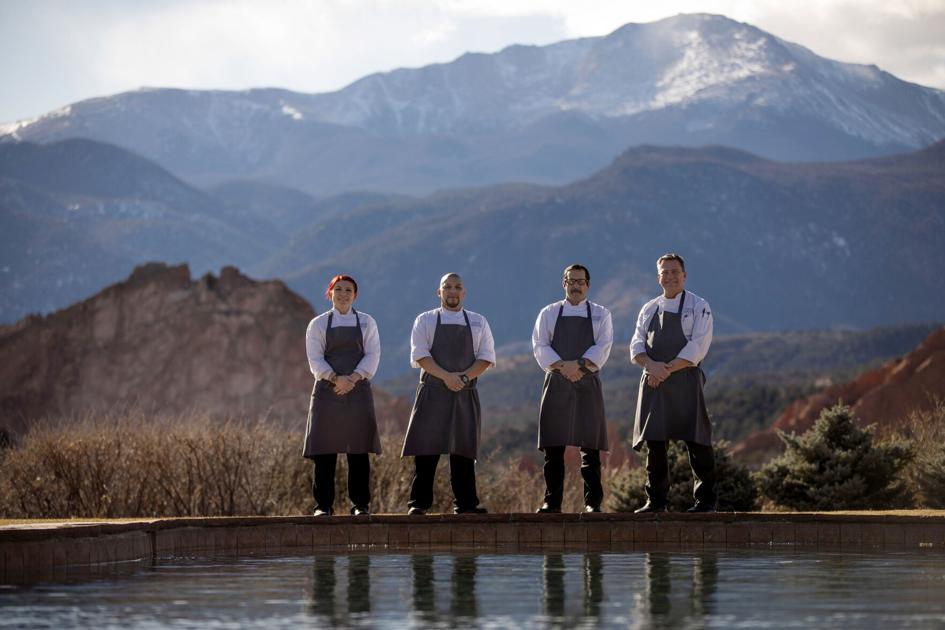 Beautifully positioned with sweeping views of the park below, Garden of the Gods Resort and Club has long been a prized asset to Colorado Springs. While its food and beverage service has earned a strong reputation over time, the club’s culinary program reached loftier heights four years ago with the addition of Dan Daughtry, who brought more than 25 years of restaurant leadership to his role as vice president of restaurants, bars and events. He’s made noticeable changes, starting with the kitchen brigade.

Daughtry knows talent when he spots it. His ability to mine the best is reflected in the chefs he’s recruited, some of whom worked with him at other resorts. Here’s a closer look at the combined galley experience of that culinary team.

Like Daughtry, Hartwell has a wealth of experience. He’s been a chef around the world, working at some of the finest restaurants and resorts.

Hartwell grew up Ann Arbor, Mich., the youngest of eight children. He attended the University of Michigan and worked as a busboy while in college.

After holding several positions at various restaurants in his home state, he headed to California after graduation.

“I moved to Santa Rosa,” he said. “I was hungry and needed a job. I started as a dishwasher at Restaurant Matisse, where chef Michael Hirschberg started training me for the line. I learned French-inspired California cuisine.”

Hartwell added: “With Hirschberg’s connections, he helped me get other positions, which led to 10 years in hotel culinary management.”

Hartwell has known Daughtry for 15 years. Daughtry first hired him to work at a resort in the Pacific Islands and later persuaded Hartwell to join him at the Edgewood Tahoe Resort in Lake Tahoe, Nev.

In October 2019, Daughtry brought Hartwell to the Springs.

“God willing, I’m never leaving,” Hartwell said. “Such incredible people here. I’ll be here until they carry me out.”

Hartwell believes in leading with empathy for employees and consistently delivering fine cuisine.

“It’s all about the food,” he said. “It’s about the experience for the guests.”

When he’s not overseeing the food operations of the kitchen, he’s fly-fishing or walking his deaf rescue dog, Lucy, who is learning sign language.

Gresham grew up in Louisville, Miss., and was the second of three sons. His first food memories revolve around hunting and gathering.

“We were an outdoor family,” he said. “My dad and brothers hunted for almost everything that went on the table. I bagged my first deer when I was 6.”

His interest in cooking sprang from watching Food Network.

“In the mid-90s, I loved watching the food shows,” he said. “I’d have dinner parties for my friends in high school.”

Gresham attended Mississippi State University for a year. His culinary career kicked off in 2000 when, at age 23, he was sous chef at the famous Lake Hotel in Yellowstone National Park.

“I was way too young to be a chef at a hotel of that caliber,” he said. “I was there four years.”

Then he started what he calls “the Rocky chapter” with a move to Steamboat Springs, where he worked with chefs who would become his most important mentors.

“I got an apprenticeship under master butcher Marco Pauvert,” he said. “He taught me patés and terrines. Marco and I would sip ritual warm brandy in the morning. His wife, Rebecca, was a wonderful classical French chef who applied global flavors on the restaurant’s daily rewritten menus.”

Inspired by what he learned from the Pauverts, Gresham returned to his Southern roots. He went to the Louisiana Culinary Institute and cooked at Galatoire’s in Baton Rouge, commuting back and forth to New Orleans to run the Galatoire’s there too.

Having worked banquets, advancing to sous chef then to chef de cuisine at Galatoire’s, he left to open his own restaurants with partners in Baton Rouge. The first was Beausoleil Restaurant and Bar in 2010. Then, in 2015, they purchased Christina’s Restaurant.

In 2016, he received quite an honor by being tapped to be the head chef of the Pavilion at Augusta National Golf Club in Augusta, Ga., home of The Masters golf tournament.

Gresham moved to the Springs in 2018 to be chef de cuisine at Summit restaurant at The Broadmoor before accepting his current position in 2020.

Stugart was the first new chef that Daughtry brought on board at the club. She also came from the Edgewood Tahoe Resort, where she took a job in 2016 as the opening head pastry chef and met Hartwell and her future boss.

Even before landing at Edgewood, Stugart built an impressive resume. During high school, she learned to prepare savory foods at various eateries. The Nevada native then attended Scottsdale Culinary Institute from 2005 to 2008, graduating with a bachelor of arts degree.

“When I was in culinary school, I got a job doing pastry and fell in love,” she said. “And that’s all I’ve done since.”

After graduating, Stugart quickly got a job at Cyrus Restaurant, a two Michelin-starred fine-dining eatery in Healdsburg, Calif., that has since closed.

In 2010, she left Cyrus for a position at Thomas Keller’s famed Bouchon Bakery in Napa, Calif., where she did separate assignments at the eatery.

“My time at Bouchon molded me into the chef I am today,” she said. “The kitchen is very structured. It’s all about the attention to detail.”

And that detail shows in her masterful pastry work.

“It’s dessert,” she said. “I want everyone to leave with a lasting memory.”

When Stugart is not in the kitchen, she’s training for her other passion: marathons.

“I ran my first half marathon in Disneyland in 2014,” she said. “I’ve done more than 20 now at Disneyland or Disney World. I’m a Disney girl. That’s my happy place.”

Born and raised in Las Vegas, Zamora started his culinary career as many chefs have — dishwashing when he was 16. He worked at several fast-food eateries and eventually found his path to serious culinary training.

In 2011, he enrolled at the Le Cordon Bleu College of Culinary Arts. He got an internship in the banquets department at Caesar’s Palace, working with chef Luis Quezada. In 2012, he joined Hilton Worldwide, which led to a position as supervisor of banquets in Santa Fe, N.M.

“I worked my way up to sous chef,” he said. “That was where I worked with chef Thomas (Hartwell).”

A few years later, a phone call came from Hartwell.

“Chef Thomas said he was building a culinary team at Garden of the Gods,” Zamora said. “It caught my interest, and I decided to give it a go.”

As chef de cuisine, he is helping to add dishes and specials to the club menus.

When he’s not grilling beef, lamb and fish, he is having a great time hiking Colorado’s trails.