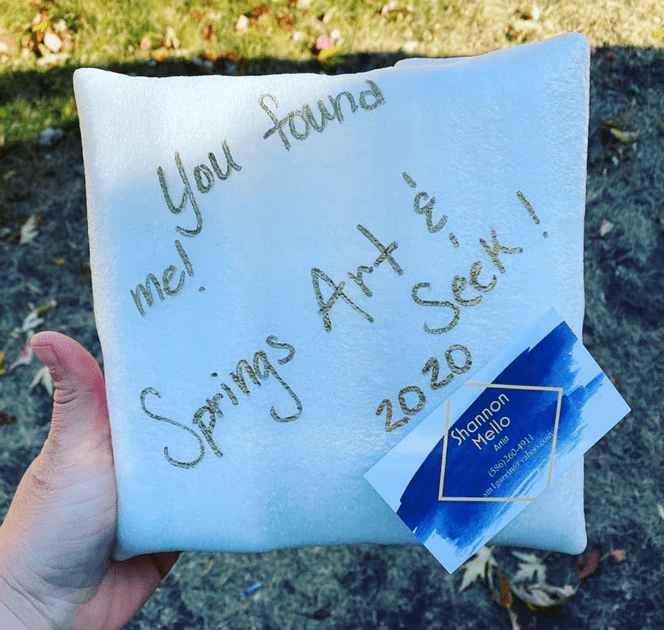 A painting hidden under some leaves. Another one on a bridge. Another piece tucked in between branches of a tree. If you find the art, it’s yours.

It’s an artsy game brought to the Pikes Peak region via the Springs Art & Seek Society, which, as its name suggests, puts on hide and seek-style events where the prize is a piece of free art.

The society was formed last year thanks to Sarah Raban. She was inspired by World Art Drop Day, the brainchild of Utah artist Jake Parker who had the idea of “dropping” artwork into hidden spots and offering clues for where people could find them. It happens on the first Tuesday in September every year, including a Denver version with a thousand pieces of art hidden around town.

Raban, who lives in Colorado Springs, was surprised there wasn’t anything like that here. So she teamed up with creative friends Steffany Boucher and Deb Schoen to start a local version of Art Drop.

“I thought it would be something beneficial to the creativity community,” Raban said. “And it sounded like it was a lot of fun.”

The Springs Art & Seek Society hosted its first scavenger hunt in October, when 50 artists hid their pieces in secret and unique spots for people to find via clues or by happenstance. The artwork ranged from wax paintings to crochet pieces to mini sculptures to jewelry. The hiding spots ranged from inside a Little Free Library to bases of prominent downtown Colorado Springs sculptures to underneath benches.

To get the word out, Raban and her co-organizers put a call out on social media to artists of all levels. “The idea was, ‘If you do anything creative, create something,’” she said. “And then on this day, in the morning, go hide it.”

That included Raban, who contributed two framed paintings to the project.

After hiding the artwork, artists posted clues on Facebook and Instagram to give seekers an idea of where to go and what they were looking for.

“It’s kind of like a puzzle,” Raban said. “People like to figure things out. And the fact that they’re getting free artwork is a big draw.”

Yes, every part of the Springs Art & Seek Society is free. Artists were eager to donate their work, Raban said, because of the unique concept.

“We just put it on because people need some fun,” Raban said. “I think the artists were having a good time too.”

Raban says they hope to put on events every six months, meaning the next scavenger hunt will be in April. It wasn’t planned, but it turned out to be an activity that works amid COVID-19 restrictions.

“If there was ever a year we needed something fun to do, this was it,” Raban said. “We need some connection.”

That’s what World Art Drop Day founder had in mind all along.

“The world needs this right now,” Parker said several years ago. “We need to feel a little more connection to each other and there’s nothing like the bond two random strangers can make through the act of creating and giving.”