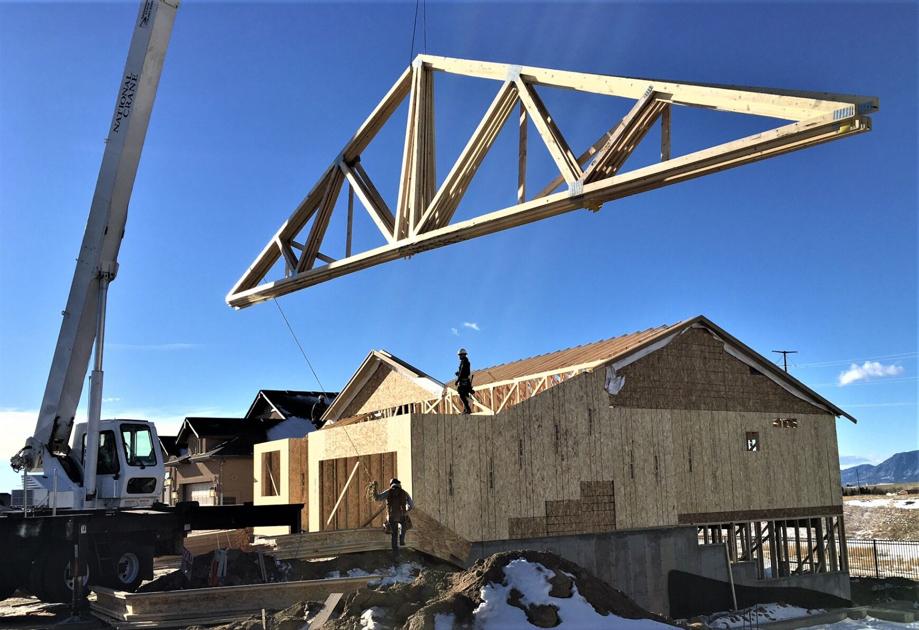 Business was booming last year for homebuilders, general contractors and subcontractors that make up the Pikes Peak region’s construction industry, despite the COVID-19 pandemic.

The estimated value of permits issued for the construction of single-family homes, townhomes, apartments, hotels, offices, schools, medical buildings, manufacturing plants and other structures last year in El Paso County soared to $2.9 billion — a record high and a nearly one-third jump over 2019, according to Pikes Peak Regional Building Department reports.

“We’ll have 60 to 70 subcontractors on each big project,” said Dustin Black, senior project manager with Springs general contractor Nunn Construction and past board president of the El Paso County Contractors Association. “And every single one of them are historically busy. Every one of them. Which is great.”

Separately, the estimated value of permits issued for residential and commercial remodelings, renovations and additions fell to $569.1 million in 2020, or a nearly 15% drop on a year-over-year basis, Regional Building Department reports show.

Despite that decline, the more than half-billion dollars worth of alterations and additions last year meant that some remodelers and other contractors had as much work as they could handle.

“The volume of jobs, just as a guess, would be about 30% more,” Eric Sachaj, owner of Advanced Remodeling Services in Colorado Springs, said of his company in 2020. “It’s been a very busy year. Everything was ramped up to the point where we had a hard time keeping everything scheduled.”

A flourishing construction industry is good news for the local economy. Homebuilders, general contractors, remodeling companies and the like hire thousands of carpenters, drywallers, electricians, plumbers and laborers, as well as engineers, estimators, project managers and superintendents. Suppliers, trucking companies and other businesses also benefit when builders and contractors are doing well.

The construction industry also pumps millions into the coffers of the city of Colorado Springs, El Paso County and other local governments, who tax the purchase of building materials and equipment. Those tax revenues are used to help fund police and fire protection, road upgrades, park maintenance and other government services.

The pandemic, however, led to permanent closures in 2020 of several restaurants and the temporary shutdown of indoor dining rooms for all eateries. Hotels, meanwhile, couldn’t fill rooms because of a drastic reduction in leisure and business travel and many large hotels and other meeting venues had to forgo conferences, wedding receptions and other money-making events.

So, how did the construction industry manage to have a banner year in 2020 while other businesses struggled?

Construction industry members cited a variety of factors that kept their businesses humming last year. Among them:

When Gov. Jared Polis issued a stay-at-home order in March that required the temporary closure of noncritical businesses to combat the spread of the coronavirus, construction-related companies were deemed essential and permitted to continue operating — with safety measures in place.

In some cities and states during the early days of the pandemic, such as Boston and Pennsylvania, construction projects were halted.

“We were so fortunate in our community that we were considered essential,” Colarelli said. “There are communities where that was not the case with construction. If you were to look at those communities, I suspect the impact on the economy of COVID was probably a lot more significant than it was here, because our construction continued and it was able to drive continued investment and make sure a lot of people were getting paychecks every week.”

• A desirable place to live and work.

An influx of newcomers moving to Colorado Springs and the Pikes Peak region, the formation of new households by young adults leaving their parents’ homes and a healthy pre-pandemic economy helped drive the demand for new homes, townhomes and apartments.

“We’re getting a lot of people that are relocating here that might be living, I don’t know, in Iowa,” said Regional Building official Roger Lovell, whose agency issues building permits and inspects construction projects to ensure they adhere to building codes. “Now they can work remotely, so they say, ‘all right, let’s go live in Colorado.’ It’s relocation. You got places like California that people can’t get out of fast enough.”

But once they arrived, some newcomers discovered a record low supply of houses available on the resale side of the market, especially during the last few months of 2020. Mortgage rates, meanwhile, fell throughout the year; by the end of 2020 they were at their lowest levels in roughly a half-century and many people sought to take advantage of the low rates.

As a result, many buyers turned to new homes, and builders wound up pulling permits to construct almost 4,500 single-family detached homes in 2020 — a nearly 28% year-over-year increase and the most in 15 years.

Townhomes, which make up a significantly smaller share of the residential market, saw a 4.2% gain in permits during 2020 over 2019.

The number of building permits for large apartments — in demand by millennials and empty nesters — fell by roughly 30% in 2020. But the number of apartments added with those big multifamily projects increased by 20% over the previous year.

“We just have a shortage of housing,” said Carrie Bartow, board president of the Housing & Building Association of Colorado Springs. “We have seen an influx of (people) coming into our state. In spite of, or because of the pandemic, people are working from home and thinking they can work from anywhere and (they’re) trying to move out of the big cities and looking for a better way of life.”

• An increase in demand.

Much of the area’s residential and commercial construction has been based on demand, not speculation, said Jim Johnson, owner of GE Johnson Construction in the Springs.

“We don’t build a lot of (excess) inventory,” Johnson said. “That’s both residential and commercial product. I think what you’re seeing is growth, as well as some pent-up demand.”

Apartments are taking shape in different pockets of the city to the meet the demand for multifamily living, especially among renters who want a newer product, Johnson said. A flurry of hotels and apartments also are in various stages of construction and planning in the Springs’ downtown, which went decades without new housing or lodging projects.

Health care giant Penrose-St. Francis Health Services is launching construction on a hospital campus in the fast-growing InterQuest area on the city’s far north side, while it’s also expanding its St. Francis Medical Center on the northeast side. Both parts of town are teeming with rooftops.

Ent Credit Union’s new 300,000-square-foot headquarters, which is under construction in the InterQuest area on the Springs’ far north side, is designed to accommodate the financial institution’s rapid Front Range growth.

“It’s the first time they’ve built their own corporate headquarters in 50 years,” said Johnson, whose company is the project’s general contractor.

Low-interest rates made it a good time for many developers and commercial investors to borrow and build, Colarelli said.

“Activity for us is, in large part, the result of the ability of our clients to get funded and the cost of funding for them,” he said. “Particularly last year, the cost of money was extraordinarily inexpensive.”

At the same time, some lenders have looked for new places to invest their money and have abandoned traditional sectors that were hurt by the pandemic, such as hotels and restaurants, Colarelli said.

“I have nine hotels, all of which are slowed or stopped because of the inability to get them financed,” he said. “Retail has slowed, It hasn’t stopped. But retail certainly has slowed.”

Lenders are investing their money with online retailers, who need to add warehouses and distribution centers for their products, Colarelli said. That creates more industrial opportunities for the construction industry, he said.

And in Colorado Springs, there are commercial construction opportunities related to the defense industry and its contractors, Colarelli said.

• A house is no longer just a home.

Based on conversations with homeowners and industry colleagues, Sachaj, of Advanced Remodeling Services, said many people who have worked from home or remained at home because of the pandemic now see upgrades they’d like to make to their properties. That’s kept remodeling companies busy, he said.

“Instead of just being home to spend a few hours and sleep, they’re home all the time or most of the day and they tend to notice more things and recognize certain changes in their house that would be beneficial to their family,” he said. “And they call us to make the changes.”

His company does additions, basement finishes and bathroom and kitchen remodeling, among other work.

“We’ve definitely had some additions,” Sachaj said of projects his company did during 2020. “A lot of people are finishing basements, as well. Finishing a basement is the cheapest way to add square footage to your home. If you move, you’re going to spend more for that square footage.”

Colorado Springs’ growth, its rating by U.S. News & World Report and other national publications as one of the country’s most desirable places to live and the addition of projects such as the U.S. Olympic & Paralympic Museum have caught the attention of businesses, developers and investors looking for new markets, Colarelli said.

Online giant Amazon will open a massive distribution center this year near the Colorado Springs Airport; North Dakota-based Scheels All Sports will debut its Walmart Supercenter-sized outdoor equipment and apparel store in late March on the north side; and In-N-Out Burger of California chose the Springs for its first restaurant in Colorado and the home of a distribution and production facility.