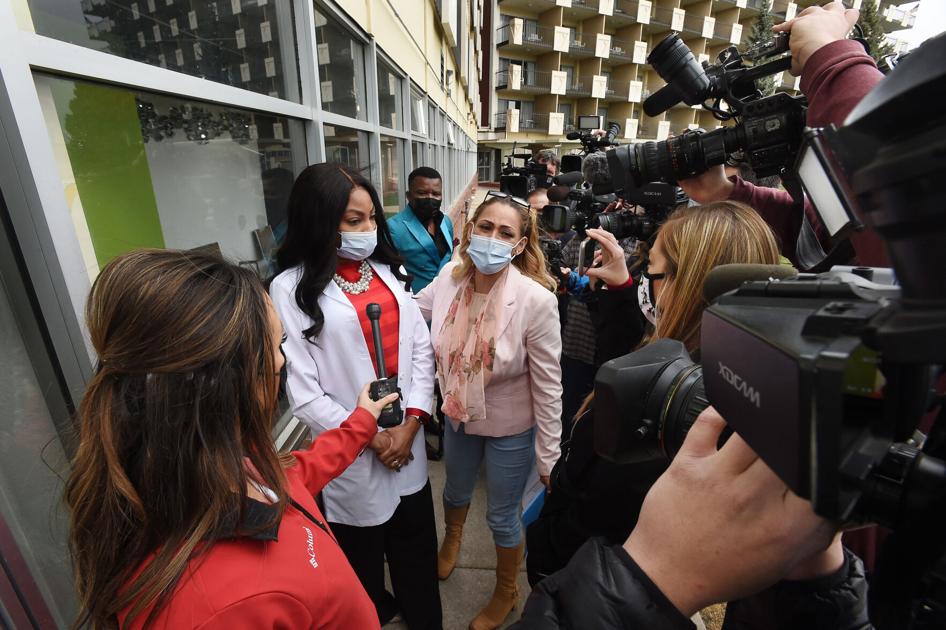 The woman who runs the Dr. Moma Health and Wellness Clinic in southeastern Colorado Springs said Monday she was working with the state to resolve allegations that the clinic improperly stored COVID-19 vaccinations, but did not respond to those allegations during a press conference she previously said would address them.

Dr. Sylvienash Moma, who holds a doctorate in nursing practice degree but is not a medical doctor, said Friday on a public Facebook page created for patients who received at least one COVID-19 vaccination from her clinic that she would hold a press conference with reporters Monday afternoon to “detail all facts pertaining to the allegations and findings” of the Colorado Department of Public Health and Environment’s investigation, which also triggered the revaccination of its patients. Moma posted the information to the public page from an account named “Favor Sylvie.”

“We apologize for not being able to make a statement earlier,” said Elizabeth Higgins, a sports medicine trainer who does not work at the clinic but led the press conference outside the Satellite Hotel where the medical spa is located. “Due to the ongoing investigation, our hands are tied at the moment, but Dr. Moma is actively working with all agencies involved to resolve this situation.”

The clinic will hold another press conference after the investigation is completed, Higgins said, though she could not give a specific date.

Last week, the state announced that thousands of people who were vaccinated at Dr. Moma Health and Wellness in Colorado Springs would need their shots repeated. State officials say the clinic failed to produce documentation proving the vaccines were properly stored.

El Paso County Public Health officials triggered the state probe after noticing the clinic showed more than 1,400 individual vaccine appointments on April 9, according to notes taken by a local Public Health employee that day during a site visit. State officials said in an email last week more than 5,300 doses had been administered at the clinic since March 1.

Higgins said Monday that the media has exaggerated the details of the events that led to the investigation, but refused to answer questions from reporters about what information she believed the media had embellished.

Higgins also said Dr. Moma Health and Wellness Clinic was permitted by the state to be a mass vaccination site.

“We knew that there were going to be 1,400 people coming in and we felt that, yes, we had all the staff that we needed to handle the situation,” Higgins said. “… We wouldn’t have received the vaccines if we were not approved.”

Clinics and hospitals must attest to state authorities they have the capacity and equipment to safely administer the vaccine in order to receive it.

In a statement last week, a Colorado Department of Public Health and Environment said Dr. Moma had “met all minimum requirements for participation in the COVID-19 Vaccination Program.”

The state health department’s program pre-approval guidelines previously said that interested vaccine providers needed to “participate in a compliance site visit conducted by” the Colorado Department of Public Health and Environment. On Friday, the state updated the guidelines on its vaccine providers webpage to say only that the health department would “conduct compliance site visits, informal observations, or investigations, in conjunction with local public health agencies, as necessary.”

A spokesperson from the Colorado Department of Public Health and Environment said in an email to The Gazette Monday evening the department updated the website “to provide better clarity about the possible types of on-site oversight.”

“From the beginning, our plan was to regularly conduct compliance site visits, informal observations, or investigations, in conjunction with local public health agencies, as necessary,” the email stated. “With over 1,300 approved providers, rarely does a compliance visit happen prior to enrollment. We rely on the information providers submit in the formal enrollment process including certifying by signature that they understand and will comply with the requirements laid out in the application.”

The state did not respond to questions about whether the site was approved as a mass vaccination site and whether a compliance site visit was conducted with Dr. Moma.

Higgins said the state did not conduct that visit. During a news conference Thursday, Colorado COVID-19 Incident Commander Scott Bookman was asked twice if the state had conducted an on-site inspection before approving Dr. Moma’s application. He demurred both times, saying the state was still involved in an “active investigation” and was still “trying to understand everything that led up to this moment.”

Inspectors from El Paso County Public Health say they found other issues at the facility, including unlabeled doses of the vaccine, a lack of post-vaccination patient observation, improperly stored vaccine vials and concerns over patient records.

Neither Moma nor Higgins addressed these allegations Monday, but in a public Facebook post Friday evening Moma said investigators “did not raise any concerns about (her) storage and handling” during their visit.

“They did not ask to see my temperature log, storage room, vaccination refrigerator, or where I was currently storing the vaccine,” Moma wrote. “They also did not ask how long the vaccines were out and why they were labeled or not labeled.”

A county Public Health employee noted during the April 9 site visit that they did not observe temperature logs or vaccine coolers and fridges. The state noted concerns of “improper cold storage in the vaccine draw room,” but Moma said in her Facebook post that storage was “not cold storage but rather a medicine cabinet to store our in-house medicines.”

She added, “The vaccines were never stored inside of it. It’s fair to say they assumed that was where I was storing the vaccines.”

El Paso County Public Health spokeswoman Michelle Hewitt said by email Monday that when the department was made aware of concerns about vaccine administration at the facility, local investigators “made observations and immediately shared these concerns with (the Colorado Department of Public Health and Environment).” Those concerns were noted in the county’s site visit notes, she said, but she could not say whether investigators verified whether the cabinet was used for in-house medicines or if it was being used for vaccine storage.

The state said it suspended vaccinations at the clinic pending the outcome of an investigation and the Colorado National Guard seized more than 3,000 vaccine doses from the facility that have since been discarded.

“We’re obviously incredibly disappointed that this happened,” Bookman said Thursday. “And we are working on increasing our capacity, and we’ll be going out, we’ll be doing on-sight inspections to ensure, to the best of our ability, that this doesn’t happen again.”

Higgins said patients who received their vaccine at the clinic and were told by the state health department to restart their vaccination series should “make their own decision based on what information they have.”

“We provided a clinic and a service, and beyond that we can’t say anything more than that,” Higgins said.