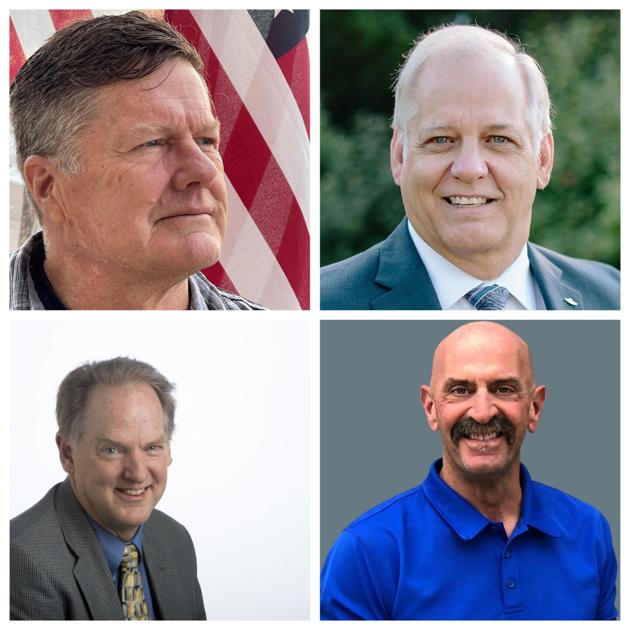 Councilman David Geislinger, a former lawyer and hospital chaplain, is facing three challengers in the race to represent northern Colorado Springs, an epicenter of city growth, in the April 6 election. The six district seats on the council are up for election this spring and voters will select a candidate specific to their district. The three at-large candidates are not facing re-election.

The virtual forum hosted by The Gazette and KOAA featured Geislinger as well as Randy Helms, retired Air Force colonel and substitute teacher, and David Noblitt, a Colorado Springs firefighter. Noblitt would retire if elected.

Candidate Jay Inman, a digital architect for Microsoft, was unable to attend.

Two of the candidates, Geislinger and Noblitt, focused on growth as the biggest issues facing the city.

Noblitt said he found the city’s rapid growth concerning and would like to see the city examine the incentives its offered  that’s helped drive growth.

“We probably need to slow some of that incentivization down,” he said.

He also noted the city is expanding without appropriate planning and the plans the city does have are not followed.

Geislinger said he supports a sustainable and regional approach to growth management and the city is already moving that way. He noted the city is working on an annexation agreement with the county that would require developers interested in annexing into the city build to city standards. For example, those developers could include sidewalks and gutters in their development plans.

“Growth is not a city problem, or a city challenge. It is a regional problem and a regional challenge. … We need to have growth by city standards,” he said.

Helms said the city’s recovery from the pandemic was the community’s most pressing challenge and he would like the city focus on supporting businesses.

“We have to look at reducing regulation, reducing red tape,” he said.

On growth, Helms said he supports positive economic development and growth in the community that would include development of multifamily housing.

The candidates also disagreed on managing short-term rentals, also known as vacation rentals, and accessory-dwelling units, apartments within or adjacent to single-family homes.

But he would like to see aggressive oversight of the new rules in place. A few of the rules require homeowners to live in one of the units they plan to rent and to get permission from the Colorado Springs Planning Commission.

Noblitt said he felt allowing accessory dwelling units on the premise they would increase housing affordability was flawed and he would like to revisit the issue.

He also said short-term rentals can have a destructive impact on neighborhoods and he would like to see further limits on corporations owning homes for the sole purpose of renting them out on a short-term basis.

Helms said he believes in private property rights of homeowners to have accessory-dwelling units or short-term rentals, but that owners should be held accountable to the current rules.

On parks, moderators asked candidates whether they agreed with the recent reduction in how much parkland developers must dedicate to the city when they build new homes.

Following a vote by the city council in February, developers are now required to dedicate 5.5 acres in parks to the city per 1,000 residents down from 7.5 acres per 1,000 people.

Geislinger voted for the reduction of parkland dedication because he felt the higher requirement could open the city up to a lawsuit, he said.

He noted he would like to see the city develop a sustainable plan to support parks this year.

Helms said he also agreed with the reduction of parkland dedication because the city has never met is goal of providing 7.5 acres of parkland per 1,000 people.

“We are not really losing that amount of space,” he said.

He also noted that the city will receive higher fees from developers paid instead of dedicating parkland because of the newly passed ordinance.

Noblitt said he was against the parkland dedication reduction saying it was a financial break for developers that will take away from future parkland available to children.

The final city council forum hosted by The Gazette and KOAA will feature District 6 candidates competing to represent northeast Colorado Springs. It will air at 12:30 p.m. on Tuesday on the KOAA Facebook page. Thank you to all who submitted questions.

The recorded forums can be found online at KOAA.com and Gazette.com. If you missed the livestream, click or tap here for the video replay (use passcode T7.27Z+D).