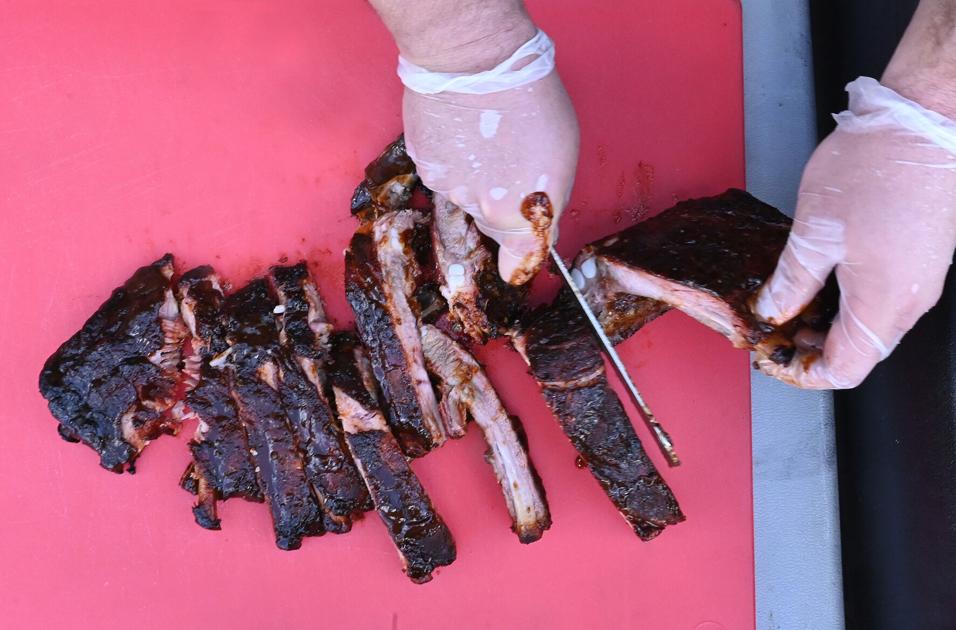 Father’s Day is a great time to show your love and respect for the man of the house. After getting a whiff of the smoky grill in the parking lot in front of Boz Marketplace and Café, 207 W. Rockrimmon Blvd., it was clear to me how we’d be celebrating this year: with a rack of ribs for dinner.

Eric Stewart, owner of the takeout store, was putting the finishing touches on his smoked pork spareribs, which he serves up at the cafe once a week.

He starts the process by rubbing the ribs with his Boz rib rub. Some barbecue jockeys like to put on the rub and let the ribs rest overnight in the refrigerator. But not Stewart

“I never put a rub on my smoked items overnight, even though some people do,” he said. “It tends to meld the flavors instead of being able to taste each herb and spice profile.”

He fires up his Big Green Egg smoker and adds chunks of cherry wood. Then he uses the 3-2-1 cooking method.

“It’s absolutely the best way to smoke ribs,” Stewart said. “The simple method involves smoking the ribs three hours, crutching (wrapping in foil) for two hours and finishing them on a grill for one hour with barbecue sauce. This gives the ribs a nice glazed finish.”

He was a fan of bourbon spicy sauce, he said, “but my son said to stop cooking with alcohol. I wanted to create something sweeter without bourbon. I love root beer and decided to use IBC root beer. You can get it at local grocery stores.”

Cheryl Alters Jamison, an award-winning cookbook author, goes with the 3-2-1 cooking method for spareribs too. She sheds some light on its origins in her newest cookbook, “Texas Q — 100 Recipes for the Very Best Barbecue from the Lone Star State All Smoke-Cooked to Perfection.”

“This a saucy version of spareribs, inspired by African American barbecue traditions of eastern Texas,” she said. “Use hickory as the wood for cooking if possible.”

But what ribs to get? For that, we pulled out notes from a BBQ 101 class we attended at Colorado BBQ Outfitters a couple of years ago.

Dan MacDonald, the owner of the store, recommended using pork baby back ribs and slowly smoking them for several hours. He says baby back ribs are more tender because they’re located in the middle of the pig’s back and get less movement.

“Smoking is low and slow, giving enough time to break down fibers in less tender cuts of meat to tenderize it,” he said. “Ribs should take a little bit to pull off the bone. A sure sign of restaurant ribs is falling-off-the-bone meat.”

He said this happens because most restaurant cooks don’t have time to smoke ribs for hours to develop flavor and tenderness.

There are three basic types of pork ribs: spareribs, baby back ribs and country-style ribs.

Spareribs come from the underbelly and side of the pig. They have the least amount of meat on the bone, but that, apparently, is a plus. Karen Adler, co-author of “The BBQ Queens’ Big Book of Barbecue,” says it means more flavor. St. Louis-style ribs, a subcategory, come from pork spareribs and have the brisket bone removed.

Baby back ribs are from the blade or center section of the loin. They have more meat per amount of bone than spareribs.

Country-style ribs come from the rib end and the loin, and contain the most meat per bone.

“Personally, pork spareribs are my favorite, though I’ve never turned down a baby back rib either,” Adler writes.

The type you choose is a matter of preference. One thing to consider if you opt for spareribs is how much to buy.

“Most barbecuers refer to the best pork ribs as being two and under,” she says, meaning a slab (13 bones) weighs less than 2 pounds. “I’ve had great luck with slabs that weigh 3 and 4 pounds, too … but stay away from the 5-plus pounders. These are usually really cheap and really tough.”

Before you cook pork spareribs, get out your knife, said Steven Raichlen during his Barbecue University class last June at The Broadmoor.

“On the underside of the sparerib, there is a membrane that holds the meat to the bone,” he said. “Because the membrane can often be tough and chewy, we remove it before smoking. This allows for greater smoke penetration of the meat, and the sauce will absorb better.”

You can ask the butcher to remove this membrane too.

If you respect dad and those ribs, buy the best, season them right and cook them properly. And make sure you have plenty of napkins on hand.

Go with 3-2-1 method for best results