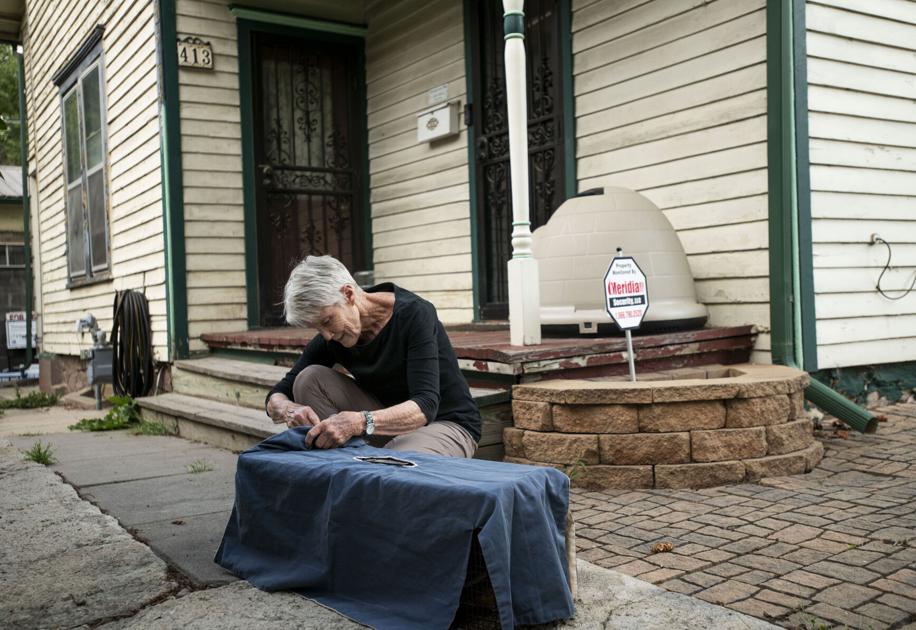 People call her the cat lady.

But not in a “crazy cat lady” way. More like in a superhero way. Because people call her a hero, too.

Consider how the 76-year-old woman introduced herself in a speech a couple years ago. Wearing glasses and a gray turtleneck only slightly darker than her short white hair, she unassumingly appeared in front of the podium.

She then referenced a photo on the screen of an abandoned red truck surrounded by junk. She told people in the audience to look closely for a cat hiding underneath the wreckage. Then she paused and declared, “I’m Barb Jones. And I do TNR.”

Even without knowing what “TNR” is, Jones made those three letters sound like a super power.

And they kind of are.

Jones has been rescuing cats for more than 40 years using the “Trap-Neuter-Return” method, which is today recognized as the most humane and effective way of controlling community cat populations.

The retired teacher spends each of her days doing something to care for some of the Colorado Springs area’s estimated 10,000 homeless or abandoned cats.

“It’s second nature to me now,” she said. “I’ve been helping people help cats for most of my life.”

It started in 1977 in a little town in west Texas. A friend and her started a TNR program there, where they helped fix a mama cat for an elderly woman named Edna. It’s a story that offers a glimpse into what Jones does every day and into her generous heart.

“She didn’t want handouts and insisted on paying us back $1 a month,” Jones says. “But she also needed help with food.”

So once a month, they drove to Edna’s house to collect a dollar and give her a $10 bag of food.

It’s just the kind of thing Jones does.

She calls herself “bipetual,” meaning she loves dogs and cats. But she learned a long time ago that dogs don’t need her help as much.

“Cats have fewer champions,” Jones says. “Everybody loves dogs. But cats don’t have as many people in their corner.”

So she’s always in their corner, working behind the scenes to help however she can.

By now, she’s an expert at knowing how to make it better.

One of the first things she wants people to know is how it happens. First, a human abandons a female, unspayed cat. That one cat can quickly turn into a colony of a dozen cats. A kitten, by the way, can come into heat by 4 months old and have babies by 6 months, potentially producing hundreds more kittens in her lifetime.

Cats in these “unmanaged colonies,” as Jones calls them, face hunger, predators and disease, among other threats.

That’s where people like Jones come in. She carefully traps cats, gets them spayed or neutered, vaccinated and surgically ear-tipped on one ear, as a sign that they are a TNR cat. Then they are returned to their territory with support from their humans to provide food and shelter.

She estimates there are at least 250 known colonies in the Colorado Springs area. And it’s a team effort to care for each colony, with the Humane Society of the Pikes Peak Region having the biggest TNR program in town and one that’s sanctioned by the city of Colorado Springs as well as the city of Pueblo. On its website, the Humane Society says the program’s goal “is to humanely decrease cat overpopulation and improve their quality of life.” It also says, “We couldn’t do it without our colony managers.”

That’s where Happy Cats Haven, the cat rescue and adoption center in Manitou Springs, directs people. As a backup, they tell people to call Barb Jones.

So she gets lots of calls. When she checked her notebook recently, she has a list of 30 people to call back and help.

“I kind of triage all the calls,” she says. “If it’s more urgent, you move up on the list.”

Her days are full of way more than phone calls. She regularly has “crazy cat days.” She delivers food to people who feed colonies of cats and she visits colonies to check on things. Often, she tries to find new homes for some cats that aren’t safe in their colonies for whatever reason. And often, that means keeping some cats at her house.

She also works hard to find other places for them, like when she asked the owner of Summerland Gardens if she’d ever want a shopcat. When Julie McIntyre said no, Jones brought in the cat anyway. Marley has been there for 10 years or so now.

“She’s a saint,” McIntyre said. “She just does this out of the kindness of her heart.”

When the subject of Barb Jones comes up, you’re going to hear lots of kind words like that.

In a thank you letter, a woman called Jones a “hero pushing against a ridiculous tide and winning.”

She’s also been called “the Mother Teresa of the feral cat world.”

Hannah Shaw, a kitten rescuer and author who goes by Kitten Lady to her 900,000 followers on Facebook, has featured Jones as a “hero of the day.”

Jones knows about the nice names people call her. But she doesn’t want it to be about that.

“I’m very fortunate,” she says, while a cat she rescued 12 years ago rests on her lap.

That’s what keeps her going each day, the hope of saving cats who need help.

“Helping people care for the cats they love makes this a better world,” she said. “One cat at a time.”