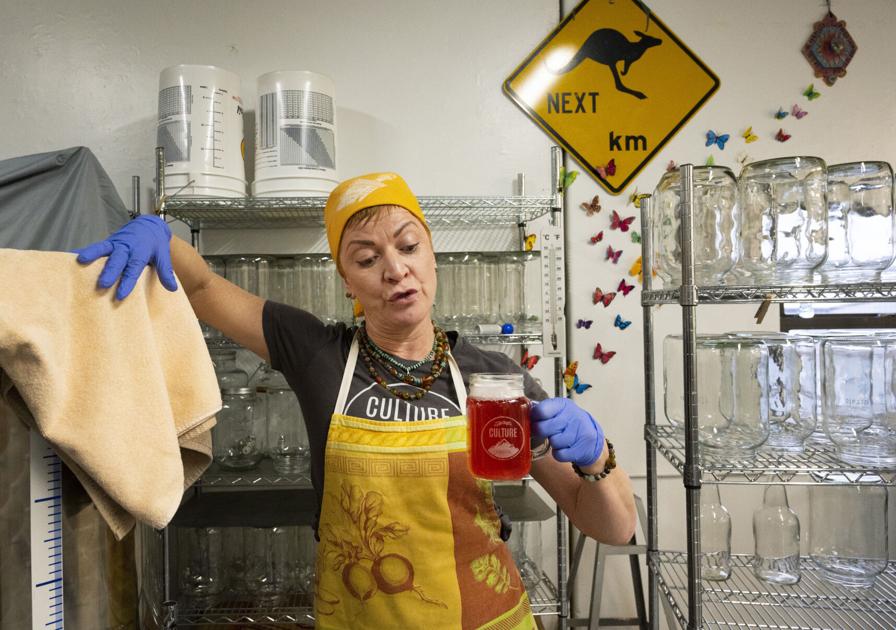 In an old warehouse near Interstate 25, a spirited woman with spiky red hair brews gallons of magical elixir.

While the bright afternoon January sun streams in through windows capturing a stellar view of Pikes Peak, she experiments with crafting perfect flavor combinations for her kombucha from ingredients such as cardamom, pear, ginger, pomegranate, jackfruit, kiwi, mango and salty cactus fruit, which tastes surprisingly like a Jolly Ranchers candy.

Janie Otero, who once slow-danced with death, is committed to living the heck out of her life. And right now, that means making and selling the fermented and effervescent tea adored by many. If you stop by her newly refurbished workspace, you might find her buzzing between her giant sinks and walk-in cooler, brewing and taste-testing her inventive creations, such as Strawberry in Mint Condition, Lavender for the Black & Blues or Blueberry Hill Meets Palo Santo. Possibly you’ll find her roller skating on the smooth tiles. And if you time it just right, you could find her hanging works of art — both her own collages and works by other Colorado Springs artists — in her square, lime green gallery that was a dreary office in a former life.

“Kombucha is the harmony of the body,” says Otero, founder of Springs Culture Kombucha. “It’s its own ecosystem. It doesn’t just do one thing. It does everything. Art does one thing, but it does more than just one thing.”

Her live culture-filled creations can be found in bars, restaurants and other liquid-serving cantinas, such as Cerberus Brewing Co., Ohana Kava Bar, The Ute & Yeti and Monse’s Pupuseria.

“We’ve tried a few different ones around town and in Colorado and hers had the best flavor,” says Adam Potter, general manager of The Brass Tap. “Everyone we serve it to has enjoyed it. She cares about what she’s doing and the way she makes it and it shows in her products.”

The bubbly potion isn’t only a tasty way to hydrate. Otero believes it also can help heal the body. Fermented foods and drinks can contain probiotics, living organisms that are said to help balance the microbiome of your gut.

A 2018 article on the website Healthline.com reported kombucha is a potential source of probiotics, contains antioxidants, might reduce the risk of heart disease and might help protect against cancer.

“If your gut is straight, think about all the other things that are running well,” says Otero. “Your skin looks nicer. Your poops are better. Your emotional state is better. As a natural side effect you’re going to have more energy. Your gut has 70% of your immune system. I don’t think people should feel so powerless in this day and age. You’ve got tons of power. And control. And it’s all about your immunity.”

“What’s the worst thing that can happen? You can die. And that’s a beautiful thing. You’ve done what you’re supposed to do, but I felt like I’m not ready,” says Otero, 51, about her diagnosis more than a decade ago. “I’ve come this far and this is how it ends? This is just the worst ‘Wizard of Oz’ ever. I did have to go through the fire and it was good. It was what brought me here. For as anxious of a person as I am, it makes me feel so at ease to know this is what it’s about — following that passion, following that ping.”

Those pings found her signing the lease on her new kombucha kitchen March 18, 2020, just as the coronavirus wrapped its arms around the city and choked everything silent. The timing reminded Otero of the shell shock of her health diagnosis.

“I almost had this ‘what have I done?’” she says. “But I said hold on a minute. If you look back and think about it, that was the worst and best year of your life because it brought you to where you are now. So if you trust this process, you’ll be exactly where you need to be in the time you need to be. It’s trusting the process. It’s not easy to do.”

In 2009, Otero, who had just turned 40 and was one year into marriage, wasn’t feeling great. Her midsection, from sternum to below her belly button, was in pain. She couldn’t rotate her torso. Thinking it was fibroids or endometriosis, she was surprised to find herself in an eight-hour surgery, where surgeons found the culprit: peritoneal mesothelioma, a cancer that develops in the lining of the abdomen. Thirteen tumors were removed during the surgery, only one of which was benign.

“Peritoneal is the Saran Wrap that keeps your organs in,” says Otero. “It’s a fine membrane and it goes around all of our organs. It’s like a Ziplock bag for organs.”

After that first operation, it took doctors quite awhile to diagnose her rare form of cancer. When they finally did, Otero learned one of the country’s two specialists was in Omaha, Neb., where she was born. It also happened to be 15 minutes from where her estranged mother lived. It was a meaningful moment of serendipity.

“She came back into my life,” says Otero. “I don’t know if it was this whole synchronized thing in the world, but I wanted her my whole life.”

Treatment was rigorous, so much so that after a 12-hour hyperthermic intraperitoneal chemotherapy, in which Otero’s abdominal cavity was opened up so doctors could pour chemo directly inside of her, she called the chaplain. That particular operation came in the middle of eight regular chemo sessions.

“I don’t know if I can come back from this, but I’m going to try,” she remembers about the aftermath of the invasive surgery. “That was traumatic. I was in the ICU. That was touch-and-go time.”

Throughout treatment in 2010, Otero, a self-described “earth muffin,” also pursued alternative treatments, such as acupuncture and Chinese medicine, healers, visits with a shaman, yoga, lots of juicing and kombucha, of course. But drinking the fizzy green and black tea wasn’t a new thing. She’d been indulging since the mid-’90s, when a friend gave her a SCOBY, which is an acronym for “symbiotic culture of bacteria and yeast,” the substance that’s formed after the fermentation process of lactic acid bacteria, acetic acid bacteria and yeast that forms sour foods and beverages, including kombucha.

“It was called mushroom tea. It’s been around thousands of years,” says Otero. “I didn’t know about second fermentation or the concept of adding the fruit. I just knew it was good for me and this is how I made it. I made it in the gallon jar with that creepy thing (the SCOBY). I gagged it down and said I’m so healthy.”

Little did Otero know that creepy thing would factor so largely into her life decades later. After healing from cancer, she took the same recipe she made in the ‘90s and started the process all over again, experimenting with different flavors and learning how to work with carbonation. Eventually, she began giving workshops on brewing, only her students weren’t having great results, so they wound up buying her product instead. A business was born.

The live cultures in kombucha also appeal to Otero in a semantics sort of way. Her intention is to create a culture movement with her beverage and the gallery.

Her health is top-notch these days. She strives to take care of her body and her mental health. And when life seems to go wrong, she’s quick to find gratitude in all the good things: warm socks and clothes without holes, healthy teeth, feeling safe and the ability to create an environment that allows her to focus on the path forward.

“After I survive something that most people die from, the least I can do is shine my light,” says Otero. “But I’ve had to give myself the permission to do that. And permission isn’t always easy.”