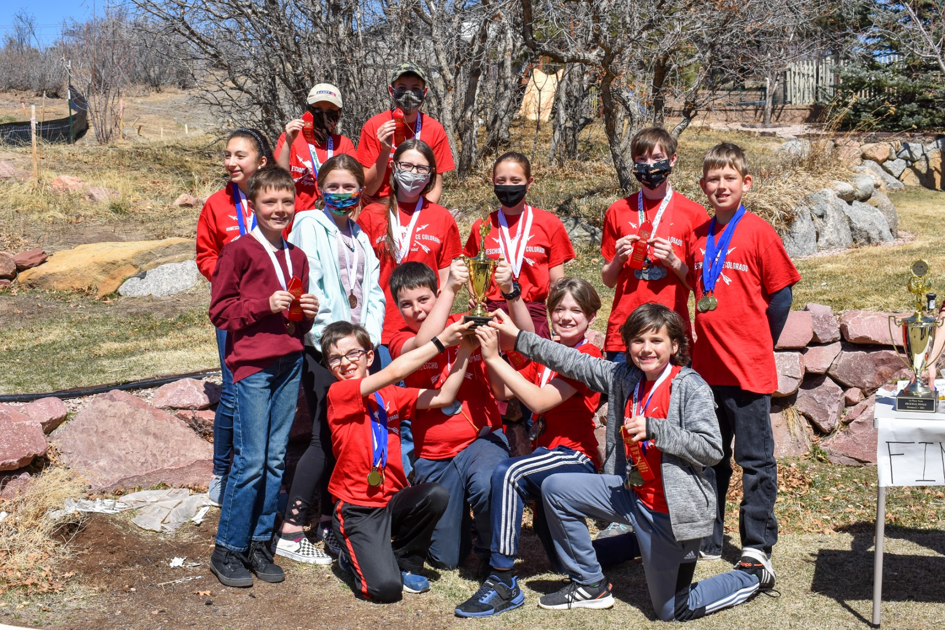 Homeschool Science Colorado, which is comprised entirely of homeschool students, won both the high school and middle school divisions of the state’s Science Olympiad tournament. It was the first victory in either division for a Colorado Springs-based team since 2011, when Cheyenne Mountain High School took the state title.

Established in 1984, the Science Olympiad applies science-based principles and techniques to competitive events.

It is not a science fair. It’s more of an Olympics of the mind, in which critical thinking and problem solving take the place of running, jumping and throwing.

Rivalries can be fierce. In the case of Homeschool Science Colorado, the state championship victory was sweetened by the fact that it came against a pair of Fort Collins-based schools that, over the past few years, have given them fits: Fossil Ridge High School and Preston Middle School.

The Springs-based team had been state runner-up to Preston in the middle school division nine straight times before breaking through this year. They placed second in the high school division, behind Fossil Ridge, in 2018 and 2019.

“They’re excellent,” Puhek said of the rival schools. “They have a lot of wonderful competitors, and I think they would say the same about us.”

The contest consists of five categories of events: life, personal and social science; earth and space science; physical science and chemistry; technology and engineering design; and inquiry/nature of science.

Some events are exams, typically conducted online. Others involve laboratory work, and some are engineering builds. One of this year’s build events, for instance, required teams to construct and fly a rubber band-powered helicopter from balsa wood.

Like nearly every facet of American life, the Olympiad was altered by COVID-19. Science Olympiad typically takes place in April and May, when most states last year were in some form of COVID-mandated lockdown. Because the competition usually involves large groups of people, often in close proximity to each other, last year’s national and state tournaments were canceled.

But scientists being problem solvers by nature, the competition’s developers created a virtual platform, called Scilympiad, allowing competitors to participate from their homes. A number of events had to be eliminated this year because there was no way to do them remotely.

The move to virtual competition was a significant adjustment – at least, for most teams.

“As a team of homeschoolers, it was an advantage for us,” said Puhek, who has homeschooled all of her six children. “We’re used to working this way.”

Fielding a homeschooled team is not without its challenges, however. Recruiting kids for the team can be difficult, because they don’t have a large student body to draw from like brick-and-mortar schools.

Instead, they have to search the pool of local homeschool students for kids who are scientifically inclined and have a competitive bent – a small, highly specific subset.

“It can be like trying to find a needle in a haystack,” said former head coach Kelly Bell.

The benefits of the competition go far beyond medals and bragging rights, Bell said. It gives students a chance to stretch their minds beyond the constraints of the classroom, provides a social outlet, and shows them how much fun science can be.

“It gets in their blood,” Bell said. “It gets them excited about science, and for most of them, that doesn’t go away.”

Puhek said the Science Olympiad has opened her son’s eyes to what his future might look like. Before he joined the team five years ago, Hudson was a gifted youngster who lacked focus and direction. Now, at 15, he’s an aspiring aerospace engineer.

“This program really helped him figure out who he is,” Puhek said. “I suspect it does that for a lot of kids.”

Hudson, whose younger sister and brother are also his teammates, said science is a discipline for people who are naturally curious about the world and the seemingly endless reaches of space. It is, he said, the study of Why.

Teammate Caleb McIrvin, 16, sees science as a key component in any effort to make the world a better place to live.

“Through science, we can make vast improvements in our day-to-day lives,” said McIrvin, who will attend Virginia Tech University in the fall.

In May, Homeschool Science Colorado will join a field of 60 teams vying for the national championship, which will also be held virtually. No Colorado team has ever won the national tournament. The last team to come close was Fort Collins High School, which placed second in 1998 after a 3rd-place finish the year before.

Puhek, who is in her third year as head coach, is optimistic about her team’s chances, but knows the competition will be stiff. She hopes her team can bring home one of the medals awarded to the students who place in the top 10% of each of the Olympiad’s 23 events.

“We hope to place respectably and would be thrilled to bring home a medal or two,” Puhek said. “It’ll be interesting to see how we do.”