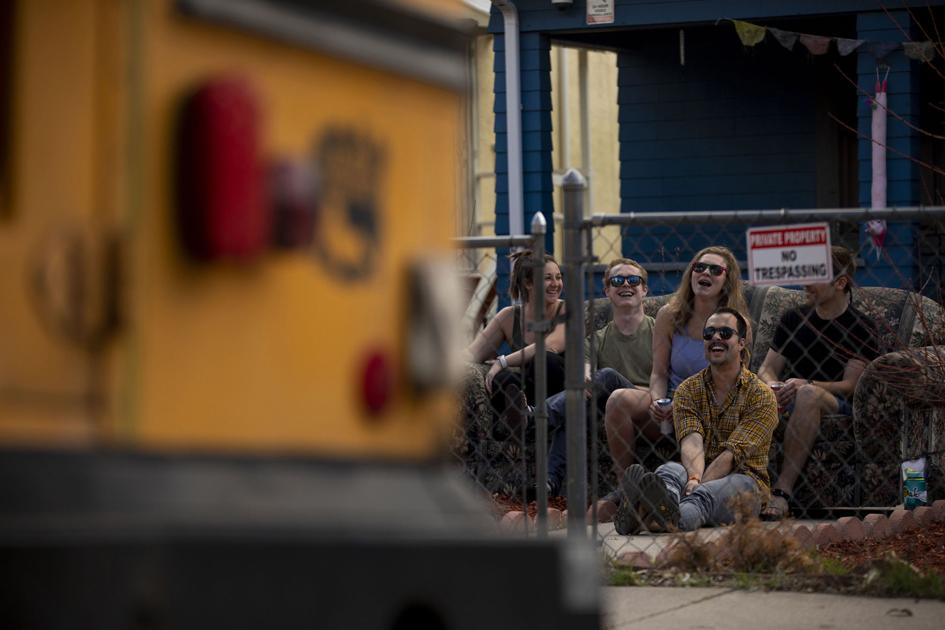 The roommates never got that big, floral couch inside. When they were moving into their house on Platte Avenue, the sofa wouldn’t fit through the doorway. So it got left on the porch.

The couch came in handy one afternoon last week when Zoe Moffett put her book down to read a text. She yelled to her housemates, “15 minutes!”

That was just enough time to grab a few beers and head outside. The band was on its way.

Soon, the Tejon Street Corner Thieves pulled up to the curb in the short yellow school bus the musicians acquired from a day care.

From inside the bus, members Connor O’Neal and Shawn D’Amario could see all five housemates sitting on the couch, which had been carried to the front lawn. It was the perfect front-row seat.

“Y’all ready?” one of the musicians asked, his voice projecting from a speaker stuck in one of the bus windows.

The concert had begun.

As the band’s gigs got canceled because of the coronavirus outbreak, O’Neal was panicking. All his income comes from shows. He thought, “What are we going to do?”

Then he got an idea to bring music, just a couple of songs, to people’s houses. People would stay near the front of their houses and the band would stay in the bus.

So every Wednesday and Saturday, the Corner Thieves hit the road. O’Neal texts fans with a 15-minutes heads-up so they don’t invite a bunch of people over.

“We want to keep it safe,” O’Neal said. “The whole point is we can’t gather.”

Since announcing their plan on social media, O’Neal says he’s been flooded with emails from people wanting a curbside concert. Moffett sent one.

“It really speaks to them, just as a band,” she said. “This is so something that they would do.”

Their fans — including 17,000 on Facebook — have come to know the men behind the band and its backstory.

Musicians Shawn D’Amario and Connor O’Neal, with the Tejon Street Corner Thieves, performs songs in their mobile concert school bus for Pikes Peak area residents every Wednesday and Saturday. The band is taking requests and performing for residents outside their homes while practicing social distancing during the stay-at-home order due to the coronavirus pandemic. (Chancey Bush/ The Gazette)

After his dad died in 2012, O’Neal, who had been living in New Orleans, moved back to the Springs, his hometown, to be around his mom. He met D’Amario through a mutual friend. They had a lot in common: D’Amario was also a Colorado Springs native, a musician and his father had recently passed away.

“We were kind of both in the same spot mentally, I guess,” O’Neal said.

They started busking on the street corners — yes, Tejon Street — and they’d play for enough tips to buy a 30-pack of beer. They spent a lot of time drinking beer and fishing.

“One of our coping mechanisms was to stay focused on something and keep busy,” O’Neal said. “And we haven’t really lost the drive. We’ve kind of never given up that spirit.”

The group, now with four members, has played pop-up shows and house concerts. In 2014, they played for people stranded on U.S. 24 when a mudslide closed the road.

In normal times, the band draws crowds every weekend at local spots like Mother Muff’s and tours regularly. The crowds are usually full of familiar faces.

Brianne Smith says it’s been on her bucket list to see the Tejon Street Corner Thieves live. Mission accomplished, when the bus rolled through her neighborhood. When O’Neal texted, she thought, “It’s an excuse to put on pants.”

“This was the coolest thing to happen to me this week,” Smith said of the show.

While the music played on Platte, the housemates swayed on the couch and sang along. A passing cyclist smiled. A surprised neighbor pulled out her cellphone.

O’Neal, who sings and plays the banjo, says it’s weird playing from inside a bus. It’s not the same as playing on a stage with a bunch of people you can actually make eye contact with. But it’s something, for now. And O’Neal thinks it’s more personal than performing on Facebook.

“You get the same feeling of the stage high,” he said. “Seeing people smile makes us feel good. We get a little bit of our fix out of it.”

And they make money. The band takes donations for shows via PayPal.

Moffett and her roommate, Addie Sobczak, usually go out to see the Tejon Streeet Corner Thieves and other shows a couple of times a month.

“We’ve definitely missed that aspect of our lives,” Moffett said. “There’s no real replacement for that.”

They are both unemployed due to the coronavirus crisis.

Their real lives include going to a real live show featuring the Corner Thieves.

“We can’t wait to see them after this,” Sobczak said.

Moffett nodded, saying, “With a whole big crowd of people.”